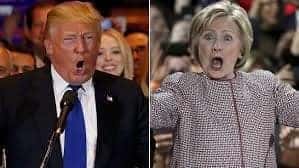 Do Not Vote Your Fears

Fear: the most primal of emotions. It incites a biochemical reaction in our bodies to prepare for the fight-or-flight response: the ultimate in survival impulses. What we often do not understand is that fear also overrides higher brain functioning. When we let fear overtake us, we no longer are able to use logic. That means that we are easily confused or misled.

Unfortunately, politicians figured this out a long time ago. The binary 2 party system we have in place now is totally devoted to using our fear against us. By putting up imperfect candidates that the opposing side can rally against, it allows the controlling factions to short-circuit voters’ ability to logically discern the pros and cons of each candidate. Instead, it becomes what Orwell spoke of in his book 1984: a 2 Minute Hate.

We have to wake up and see how both factions in this binary system have and are using many of us in order to ensure political, social, and economic inertia that only benefits the elite. By controlling us using our fear, we can no longer push forward for what we need; instead, we are stuck trying to fight the boogeyman the other side created for us. This leaves us with absolutely no progress at all: in fact, it creates the opportunity for regressivism to take place (this not only applies to the GOP but likewise to the DNC, as we have seen with the leaked emails, the DNC are no saints when it comes to manipulation and corruption).

This leads to the phenomenon known as the ‘lesser evil‘. By using our fears against us, we are pushed to not support one candidate; instead, we are forced to vote against another candidate because we fear what they may do while in office. This fear-based politics only guarantees that good candidates will not have the ability to make it into office.

In the end, only the American public suffers when too many of us succumb to fear politics. We can no longer think; we just end up fearing whatever bugbear-of-the-week that the 2 party system puts in front of us. This is further than counterproductive: it is thoroughly deadly. Look at how many lives have been lost in unnecessary wars (both American and otherwise). Look at the deaths caused by terrorism (which we are also complicit in because we support regime change in other sovereign nations). Look at how the 2 party paradigm has put the 2 most flawed candidates in the history of this nation before us.

Now is the time we stop fearing what we are told to fear and start thinking again. We have a nation with the resources to do so much better for everyone than we are doing now. Let’s use our heads, discard the two-party binary system we are subject to, and finally get rid of the fearmongers from our political system and support our fellow Americans from the fear-based politics that only benefit the elite!!