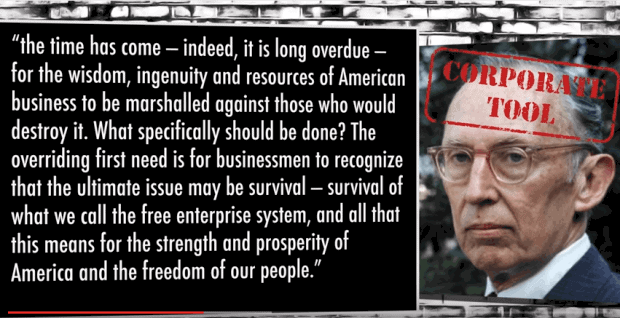 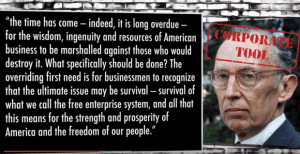 Now that the dust has settled from the Democratic Primary, and our guy lost (albeit to a rigged and corrupt system colluding with a sycophantic corporatist media), we are all left wondering, “Where do we go from here?” It is illustrative when pondering the many choices to understand how exactly we got ‘here’, and how long it took for the corporatist powers that currently monopolize American government to gain their stranglehold on our democracy.

In 1971, some 45 years ago this week, an otherwise mild-mannered lawyer named Lewis Powell penned a manifesto that served as a battle cry for the 1%. Powell was, among other things, a consultant to the Chamber of Commerce and a board member for tobacco giant Phillip Morris who was upset at the use of government regulation, which he saw in his words from the title of the memo as an “Attack on (the) American Free Enterprise System.” Powell no doubt had a hand in the obfuscation of scientific reports in the prior decade that tobacco was linked to a variety of illnesses and eventually death. His metaphorical fingerprints can be seen in the tobacco industry’s outright obfuscation of scientific evidence, the exact same strategy later used by the petroleum industry to cast doubt on the ironclad scientific consensus for global warming.

The Powell manifesto also calls for corporatist interests to avail themselves of “judicial activism” in order to pursue their agenda. This idea was novel at the time, and most likely influenced Nixon to appoint Powell to the Supreme Court in subsequent years. Once wearing the SCOTUS robes, Powell set about to utilize his new found powers to invent from whole cloth the idea of “Corporate Free Speech” that has led to the de facto establishment of corporate personhood today. The seeds of this concept now find their way insidiously into trade agreements which allow corporate profits preeminence over environmental regulations, human rights, and national sovereignty in general.

Don’t just take my word for the profound way this memo inspired the corporatist right. Kim Phillips-Fein, a historian, credits the Powell manifesto with the creation of the American Legislative Exchange Council (ALEC, founded in 1973), which now writes laws in their entirety and allows legislators to fill in the blank with their name and state before submitting them for passage. Phillips-Fein also ties the memo to the establishment of several conservative family foundations (Koch, Coors, Scaife, etc.) and also the creations of the Heritage Foundation (1973), the Cato Institute (1979), and later Americans for Prosperity (founded as Citizens for a Sound Economy in 1984).

Reading the manifesto is somewhat breathtaking when it is taken in context. Especially when you realize that Powell is arguing for the ability of corporations to continue to manufacture DDT, lead-based paint, and the ability to market tobacco to children under the guises of “Free Enterprise” and railing against the recent creation of the Environmental Protection Agency. It makes you fully realize the stark lunacy inherent in unrestrained capitalism. Now that we have proven via Bernie’s candidacy that “socialism” is no longer a dirty word, especially for the younger generation, who see full well that unrestrained capitalism offers a buffet of wage slavery and parasitic enterprises who threaten allergic toddlers with peanut butter while dangling $400 EpiPens in front of their desperate parents, we must, in the words of Chris Hedges, begin to question the virtues of capitalism instead of merely critique its shortfalls.

So, again, the question is “where do we go from here?” I think we would do well to learn some lessons from Powell and his manifesto. The answer doesn’t lie in watering down our demands in order to make them palatable to the establishment. We should, in words of Mario Savio, throw ourselves against the levers of the machine in order to bring it to a grinding halt. The only change that ever happens is that which comes from the people demanding it.

The corporatists have big money, but we have recently proved that small-dollar donations can match them for the right candidate. The big issue is that we need to expand the political spectrum beyond the duopoly of the Republican and Democratic parties, as both of them are completely under the sway of the Neoliberal corporatist cabals. The answer to Republican corruption cannot be Democratic corruption. We must strive to increase the independent vote NOW in order to create a data point that will prove that there is significant support for independent voices. With that data point, we can then drag the Overton Window on independent candidates to a place that is more conducive, encouraging more and more people to take the plunge and run for office.

We have also proved that “Socialism’ is no longer the boogeyman that it was in the past, and that there is an overwhelming and genuine desire for socialist policies among the younger generation. Bernie’s embrace of Stephanie Kelton shows that Modern Monetary Theory is growing in popularity and with it, the ability to finance 21st-century socialist policies that could bring more equity to our economy.

What we primarily need, as Powell himself advocated, is a network of informed and educated advocates willing and able to take the case for our policies and candidates to the public. While the Neoliberals now have exclusive control over traditional media, we must build alternative networks in order to propagate our message. We must not abandon the airwaves to their propaganda, however. We must merely see the media for what they are, a gaggle of millionaires carrying water for the 1% and perpetuating the echo chamber that Powell demanded to be created.

Real Progressives is working on several of these fronts and actively seeking to partner with as many genuinely progressive organizations and candidates as we can in order to maintain the tide that was created this year. We hope that you will continue to join us and share your opinions with us on Facebook, YouTube, Twitter, and here on RealProgressives.org.