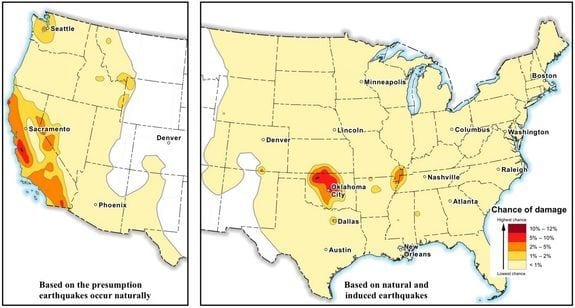 By now, everyone should understand that free-market capitalism is as much of a farce as trickle-down economics. By and large what we have is socialism for the affluent and austerity for the disadvantaged. Time and time again we see subsidies for businesses that allow them to extract profit by foisting their losses on the public. The modus operandi of capitalism is “privatize the profits and socialize the losses.” If in fact, the losses were accurately balanced with the profits we would find the vast majority a net loss for society.

Case in point, fracking operations in Oklahoma have increased the earthquake hazard level until it is equal that of California despite there being no equivalent natural fault system. Between 2009 and 2016 the number of magnitude 3 (or greater) earthquakes has increased from 2 ” 3 to hundreds per year, a phenomenon known as an earthquake swarm. The oil and gas industry has essentially created a new earthquake zone, and will be passing along the cost of associated property damage to the citizens while literally pumping the profit from the ground and into their pockets. All without batting an eye.

That eye might have begun to blink as a result of a record-tying 5.6 magnitude earthquake caused by fracking operations in central Oklahoma. Six buildings were rendered uninhabitable and several others damaged, including a historic 100-year-old sandstone building in Pawnee, and the governor has declared a state of emergency as crews continue to assess the damage. The industry will continue to deny responsibility, but the connection between deep wastewater injection wells and earthquakes was definitively proven by the Army Corps of Engineers 50 years ago at Rocky Flats in Colorado. The wastewater resulting from fracking contains a witches blend of toxins, some of which are radioactive, which could taint drinking water for decades if they reach aquifers. Incredibly these radioactive wastes are exempt from most every regulation that normally concerns toxic waste, a benefit no doubt won by hard lobbying in congress, and which can lead to a wide variety of public health crises including cancer. Again, the profits are extracted and privatized and the actual costs are socialized.

Another example lies in the remains of bankrupt drilling operations. There are thousands of abandoned fracking wells littering the landscape. While the corporations responsible for drilling are theoretically responsible for their remediation, they have utilized a loophole allowing them to post a modest bond instead of purchasing insurance policies, and then they merely declare bankruptcy after the profitable phase of the operation ceases. Once the cheap money is gone, they abandon the well, declare bankruptcy, and pass along the costs of cleaning up their operations to the public, both in cleanup and in health implications.

These are the costs of capitalism. This is how it is supposed to work. These aren’t people ‘gaming’ the system. These are people ‘maximizing shareholder profit’, which is the textbook definition of fiduciary responsibility. These are examples of capitalism working as it is intended to do, without regard to public consequences and with no consideration of social responsibility or spillover cost.

If capitalism is to exist at all, it must be pummeled into submission and enslaved to serve society as a whole. In the words of Chris Hedges, “capitalism plunders resources; exploits cheap, unorganized labor; and creates pliable, corrupt governments that abandon the common good to serve corporate profit.” Corporate charters must include a provision that they provide a valuable service to society itself. There is, after all, no hint of capitalism or guarantee of profit in the Constitution. Not a single mention of it at all.

We the people are the crafters of the social contract. We have every right to create it any way we see fit. We absolutely must insist that government exists to provide for the general welfare first and foremost, and not exist as a means for upward distribution of wealth.

The success of the Bernie Sanders campaign has shown us that, especially among the younger generations, socialism no longer carries the negative stigmas that were imbued in the past. We must begin to embrace the precept that Socialism is a key aspect of the solution to our economic problems, even if that means looking beyond the false dichotomy of the two dominant political parties.