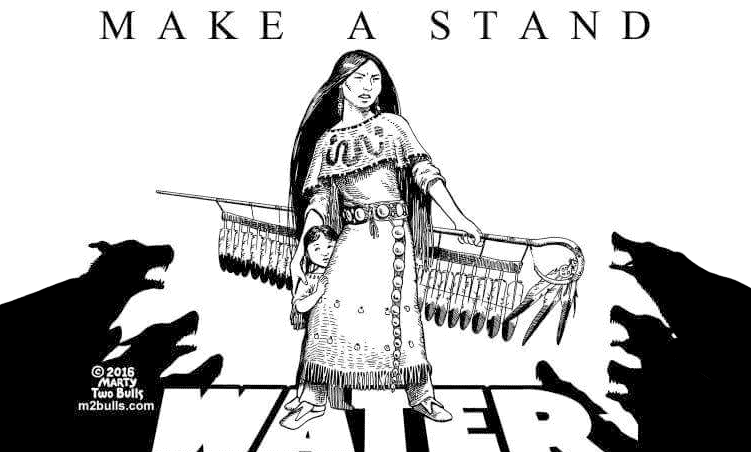 We at Real Progressives applaud the recent intervention by the executive branch at the DAPL pipeline this week, even though it is a temporary victory at best. After a loss in a court hearing, the executive branch declared political privilege and halted construction on the pipeline until certain environmental and cultural impacts can be reevaluated. This is first a victory for all the Native American nations. They have long been persecuted and wronged by a government and society they have disproportionately served with bravery and valor in times of peace as well as times of war. I propose, however, that this becomes a new opportunity to extend that win permanently to all of humanity, by repositioning the Overton Window with respect to the legal interpretation of Water Rights.

Water rights have long been contentious in western states, particularly among Native Americans, and there are even water courts which exclusively hear cases regarding claims old and new. The legal rights date back to miners, who were granted rights to the steams the discovered and first tapped for use. The legal doctrine involved is called prior appropriation and dictates essentially that the first users have more rights than latecomers, in effect “first in time, first in right’. Under this doctrine the rights of the first claimants allow more usage, even to the detriment of those at the end of the line, even if there is not sufficient water for everyone, resulting in some western streams running dry during parts of the year. Additionally, if a water right is not continuously used it is lost, which promotes wasting of large quantities of water in order to merely maintain the status quo of particular people in the rights hierarchy. This concept of water rights should be appropriated as a human right for survival, which is already recognized by the UN, as well as agriculture and commerce, and the people’s right to access to clean water should inherently supersede all other rights of commerce and of mineral claims. In doing so, the burden of proof should lie on the person proposing a project that it does not affect the right to clean water not only in the immediate vicinity and at the immediate time, but throughout the watershed and all those downstream in the future as well.

That is the DAPL situation in a nutshell. It passes upstream from the Standing Rock reservation, not across it, but nonetheless, it endangers their life water. It endangers their lives and livelihoods. Those concerns must be given precedence over matters of commerce. Likewise, in fracking where mineral rights are being used throughout the west to overrule the concerns of local governments and preventing them from being able to regulate an activity that has proven itself to contaminate the water table, and its associated injection wells have long ago a been shown to cause earthquake swarms.

The progressive movement needs to begin to utilize the tactics of the right, particularly those originally laid forth in the infamous Powell Memorandum, in setting up think tanks and hotbeds for proposing legislative proposals. We need to begin to take our fight forward from public protest to the halls of statehouses across the nation. We need to empower more states to use ballot initiatives to bypass corrupt legislatures and enshrine the human right to clean water in state constitutions, and eventually into the United States constitution itself, especially as climate change progresses.

We will not be unopposed in this effort, unfortunately, because there are enormous amounts of money at stake in the petroleum industry which has a growing need for water, by big agriculture that threatens surface water purity through fertilizer and pesticide runoff, and even from corporations like Nestle whose CEO has infamously said “water is not a human right’. He is partially correct, however, in that as it stands today it is not recognized as such, and that is definitely a problem.

The access to clean water is critical for human health, that is an incontestable fact. The issue, in the end, is whether our government will be forced to serve humanity or to serve the private interests of those who would be predators upon it. The cat is completely out of the bag with respect to the millennial’s opinion on the validity of socialism in public policy. Their open and warm embrace of Bernie Sanders’s candidacy has proven this. Now is the time that we band together and rise up and demand that our government fulfill its constitutional obligation to preserve the general welfare first and foremost. We have allowed the capitalists free reign for far too long.