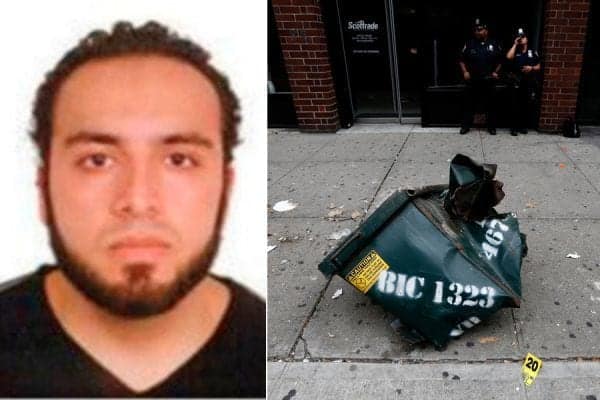 Over the weekend, there were bombings in the NYC neighborhood of Chelsea and in Seaside Park, NJ. Also, a backpack with multiple bombs was found in Elizabeth, NJ and when it was opened, one of the bombs detonated. The FBI identified a person of interest related to these incidents, Ahmad Khan Rahami. He was determined to have placed a duffel bag in the area around Chelsea.

CNN reports on this issue:

— New York Gov. Andrew Cuomo said Monday the bombs found over the weekend have similarities, suggesting “there might have been a common linkage.” He said the investigation is ongoing, and he “wouldn’t be surprised if it zeroes in on a particular individual, today even,” and he “wouldn’t be surprised if we found a foreign connection to the act.”
— A federal law enforcement official said BBs and ball bearings were among the pieces of metal that appeared to be packed into two pressure cooker bombs in New York. One of those devices exploded on 23rd Street, but the fact that it was partly under a metal trash container may have diminished the force of the blast.
— Surveillance videos showed the same man near the site of the explosion in Chelsea and where a pressure-cooker device was found four blocks away, several local and federal law enforcement sources told CNN.
— On Sunday night, the FBI and New York police stopped a vehicle of interest in the investigation, according to a statement from the FBI. No one has been charged with any crime and the investigation is ongoing, the statement said.

The FBI has already added Rahami to their Most Wanted List:

Update: The suspect is now in custody after shooting a cop:

Real Progressives will report more on this situation as more information becomes available.