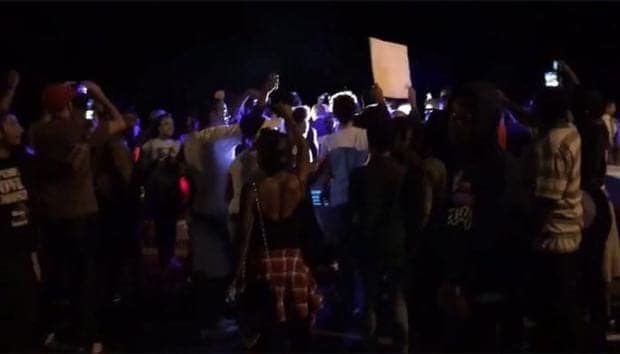 In Charlotte, NC; Keith Scott, a disabled man, was shot and killed by Charlotte police officer Brentley Vinson, today around 4pm EDT. The police were looking for someone that had a current warrant when Mr. Scott supposedly went inside a car and came back with a weapon. Officers then responded with deadly force. Some bystanders do not agree with the police’s account of the story. They say that the item was not a gun but a book:

Here’s the man’s sister. She says he did not have a gun. @CMPD says he did. @WBTV_News pic.twitter.com/JwHMixy9m7

The community immediately started to protest this shooting and demonstrators gathered to express their feelings about the incident. CNN shows the protesters as they rally:

The crowd of demonstrators eventually riots and the police are led away from the scene:

BREAKING NEWS from Charlotte, NC:
People on Twitter are reporting that protestors have begun battling and… https://t.co/sqrDnb7Wox

Update: The wife of Scott took a cell phone video of what happened. It appears that one police officer tried to plant a gun at the scene:

#KeithScott Here’s the footage and you can clearly see the cops planting evidence. Wow and its from the wife’s cellphone!!! #pvlsemedia pic.twitter.com/olyVIMbH7N

Another update: two separate eyewitnesses state that Scott had no gun and that the real shooter was a white police officer:

An eyewitness to the shooting death of #KeithLamontScott in #Charlotte NC says the officer who shot Scott was white and he only had a book. pic.twitter.com/q2BpBTZSeN

Real Progressives will report more on this breaking story as more information is brought forth.