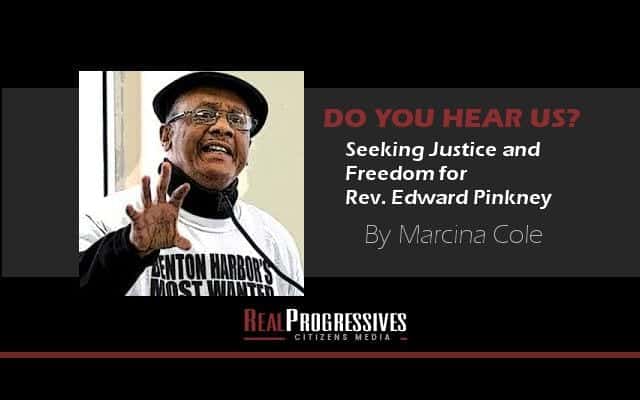 Free Reverend Edward Pinkney – Do You Hear Us? We Want Justice and Freedom, Now!

The days have been long and agonizing since Reverend Edward Pinkney, a sixty-eight-year old Black man and political prisoner, was incarcerated in December 2014. Rev. Pinkney, a civil rights activist and organizer from Benton Harbor, was charged and convicted of election fraud. On October 27, 2014, he was found guilty by an all-white jury of five felony counts of voter fraud. Rev. Pinkney was accused of allegedly altering dates on a recall petition against the former mayor James Hightower of Benton Harbor, Michigan. This politician looks out for the best interests of the Whirlpool Corporation who swamp over the small town, suffocating opportunities for the over 90% Black residents who are poor and disenfranchised. Hightower supported Whirlpool not having to pay any city income tax, and the burden shifted to the poor residents in Benton Harbor when Hightower took out an over two million dollar loan.

In 1917, the Klock family gave the beautiful Jean Klock Park to the people of Benton Harbor forever. The park land sits along beautiful Lake Michigan, with trees, no chemicals in the area, and a view of the bird habitat nearby. All that ended when Harbor Shores, a subsidiary of Whirlpool, took over the park. Thanks to the greedy politicians and the crooked judicial system in Michigan, the road was paved for a takeover of the park. Now the land is polluted, a golf course sits where part of the park used to be, and expensive homes have shot up to appease the 93% white community of neighboring St. Joseph, Michigan. Across the bridge from Benton Harbor, they were once called the twin cities.

Yes, residents of Benton Harbor should have been upset: their natural jewels stripped away, leaving nothing the residents could call their own. It’s been destroyed for the sake of money handed on a silver platter to the rich and powerful. Yes, Rev. Pinkney went up against Whirlpool Corporation, built in the heart of Benton Harbor. Whirlpool’s annual revenue is over 20 billion dollars. No wonder Fred Upton, the heir to Whirlpool, became a politician to protect his assets. Rev. Pinkney has no money. But Upton and his friends and family have ganged up on Rev. Pinkney and made sure he will suffer at the hands of this corrupt criminal justice system: a system that is racist, and politically motivated to keep an activist locked up in jail and silent, along with silencing any other residents in Benton Harbor who would dare to speak out against Whirlpool. Based on no direct evidence, he was convicted. Judge Schrock and Berrien County Prosecutor Mike Sepic said they didn’t need any proof to convict Rev. Pinkney. Rev. Pinkney was handed down a horrific sentence of 30 months to 10 years.

Rev. Pinkney has served 19 months of his sentence in prison. Since 2014 he has been transferred seven times: from Jackson to Kinross, Marquette, Lakeland Correctional Facility, Marquette Branch Prison, Kinross, and now West Shoreline Correctional Facility in Muskegon, Michigan. The worst Rev. Pinkney endured was at Marquette Branch Prison in Marquette, Michigan. During his stay there, he was targeted by prison guards who issued bogus tickets, such as for having a Bible on his bed, having too many legal books, fundraising, etc. Rev. Pinkney’s phone privileges were taken away for six months. He was exposed to mold in his cell, causing difficulty breathing, severe stomach spasms, and loss of weight. The prison food served by the Trinity food service, a private corporation, is not fit for human consumption. For a time, his name was called every hour on a loudspeaker through the night by the guards; he would answer, and then be called again, and again. He and other inmates couldn’t sleep with forced cell checks every hour, and shining flashlights through the night. Sleep deprivation, hypertension, and physical assaults even leading to death occur at Marquette Branch Prison.

Rev. Pinkney requested hearings and supporters filed complaints and made phone calls to the Michigan Department of Corrections (MDOC). These fell on the deaf ears of MDOC Director Heidi Washington. Washington emphatically denied suspicious deaths, and according to her the allegations of ill treatment of Rev. Pinkney were false.

The fight continues for Rev. Pinkney. It’s astounding that across this country, including Michigan, voter fraud is virtually non-existent, yet Rev. Pinkney has been charged more than once of election fraud. He was first accused in 2005 of election fraud. In 2006, the trial resulted in a mistrial due to a hung jury. In 2007, Pinkney was retried, this time with an all-white jury that found him guilty. He was sentenced to house arrest and probation by Berrien County Judge Butzbaugh.

Rev. Pinkney was under house arrest until December 21, 2007, when Judge Butzbaugh issued a warrant for his arrest. In an article in a local newspaper, Rev. Pinkney criticized Butzbaugh for his racism and quoted a scripture from the Bible, Deuteronomy 28:14-22. Butzbaugh claimed he felt threatened and accused Rev. Pinkney of violating his probation. The case was heard by the biased Judge Wiley who gave Rev. Pinkney a three- to ten-year sentence for quoting the Bible. This outrageous decision was later overturned on appeal after Rev. Pinkney wrongly spent a year in prison.

“We must continue to fight this battle. It’s time to say enough is enough,” he said. It is time for the people to stand. For additional information about civil rights leader Rev. Edward Pinkney, please go to bhbanco.org, the website of Benton Harbor BANCO (Black Autonomy Network Community Organization).