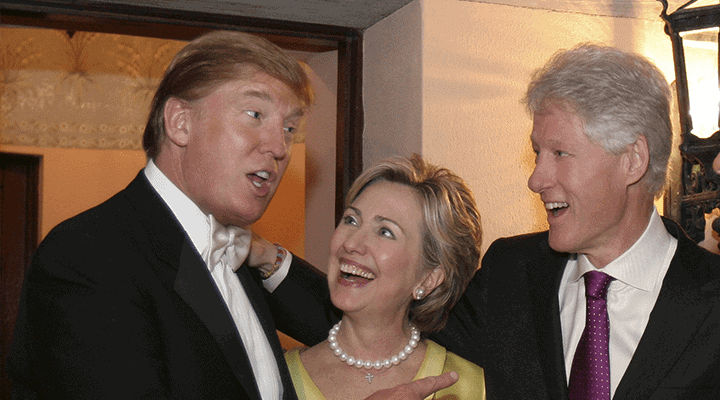 Hillary Vs. Trump, And The Overton Window

I just watched (part of) the first duopoly infomercial, branded as a political debate of the presidential horserace season. In case you missed it, what they did was define the Overton Window for the next 4 – 8 years. The Overton Window is a conceptual space of public discourse that includes all “serious topics for debate.” By controlling what is considered publicly “serious,” you are instantly enabled to not only control the spectrum of political discourse itself but also limit the range of the outcomes from that debate before it ever actually occurs. If no debate ensues to counter their preconceived consensus it merely becomes a win by default.

You can’t simply ignore the presidential debate and focus on down-ticket races, because those races have to spend precious time and money refuting the positions sent down from above.  Issues like the illegal invasion of Iraq, in which the party line apparently became “he was for it too.”  I can see the neoconservatives (some of who have openly endorsed Hillary Clinton) lining up dominoes to knock down in short order.

Clinton now publicly has the democratic establishment, and is assumed to have the endorsement of the entirety of the left merely from the ‘lack of any other (sane) choice’. She has no need for the left, and every policy now is a calculus to pick up centrists and moderate conservatives.  It is classic ‘Clintonian triangulation.’ The problem is that it also defines that Overton Window for the vast majority of America. The one race everyone will pay attention to is Clinton versus Trump.  Candidates in down-ticket races for either side will be forced to get with the program of their party’s candidate or to defend why they are not. All dissenting voices will be greeted with shrill derision and anyone expressing anything other than complete support will be heaped upon with scorn and consternations aplenty.

On Clinton’s side, “It’s her turn,” and so is her platform. It echoes Rahm Emmanuel telling the left that they were “fucking retarded” to think about primarying Democrats who voted against single-payer healthcare before the public ACA debate ever began. The Democratic Party establishment, it seems, is constantly in the position of demanding we silently consent and support them, proffering some vague promise of access to power on the hind teat in return. Our place is apparently just behind all those people who have spent years paying Hillary obscene sums of cash to stroke their own egos.  Don’t laugh: It’s actually how it works.

The times themselves demand that we voice our frustration loudly and clearly. We must admit that, in the words of Chris Hedges, democracy is no longer functional in the United States of America.  We are subservient to the politics of the monied aristocracy. We will get no prosecution of the bankers at Wells Fargo for the systemic identity theft from their own customers, merely an acceptance that fines like the CFPB recently issued (always far less than the profits procured) is the most we can get done.  After all, Hillary is a progressive who likes to get stuff done. Wells Fargo fired thousands of (low paid and low level) employees anyway! Hey, Liz Warren likes me (insert awkward Hillary smirk here).

That is the present. Imagine a dystopian future in which the revolution that we intended to bring about is dead on the vine.  The mind-blowing acceptance of socialism and socialist policies is consigned to the dustbin of history. Never you mind that the next generation voted overwhelmingly for a more liberal direction. Any insistence that Democrats pay any attention to Bernie’s platform is a mere distraction from the newly demanded need to acquire the support of centrist and moderate conservatives. You can’t even honestly call it a tack to the right, because it’s as swift as a tsunami.

Your vote in this election is the only voice you get on the big picture. Once they’re elected, they don’t really care why you voted for them. They won. You elected them and their platform is now the mandate du jour to reshape individual civil liberties, reframe censorship, militaristic foreign policy, proto-militaristic domestic police forces, etc.

The electoral system in America enables the presences of only two dominant parties, but largely only because the electorate themselves accept that preposterous position. To wit: the position that third parties can’t win because nobody will ever vote third parties, because nobody ever votes third parties, is ludicrous on its face. It is political autocastration. It is also the one thing we must overcome in order to gain any political traction in the competition to define the limits of public debate.