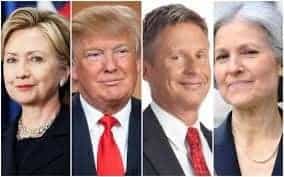 MSM Fraudulently Keeps Third Party Candidates Out of the Debates

The first Presidential debate will be held today at Hofstra University with only two of the Presidential candidates debating. The Commission on Presidential Debates, which is owned by donor corporations and operated by the two major political parties, sponsors the debates. Since 2000, the Commission has had an arbitrary rule that third party candidates must poll 15% or better consistently to qualify to be in the Presidential debates. The reasoning behind their ruling is that the voter’s time should not be wasted on “insignificant” candidates. To determine whether the third party candidate meets the criterion, the CPD relies on five polls conducted by MSM, all of which have at least one major donor to the Clinton campaign.

Although political polls are presented to the public as matters of fact, they are only as good and accurate as the data collected and the methodology used. In order for these polls to be accurate, it is imperative that the sample used represent the US voting population. Of the 5 polls used by the CPD, only one of them, CNN, includes a representative number of independent voters. That means the other 4 polls, which show Jill Stein polling at 2-5% are inaccurate, are worthless.

Although the CNN included a representative sample of independent voters, it failed to include a representative sample of voters ages 18-30 who make up 30% of the voting block. According other sources, 29% of those in this age group favor Gary Johnson, and 15% favor Jill Stein. The fact that this age group is not adequately represented in the CNN poll renders it inaccurate and worthless. In conclusion, none of the polls used by the CPD to determine whether the third party candidates qualify are truly representative of the American voters.

Both of the establishment 2016 Presidential candidates are scoring historically high unfavorable ratings at nearly 60%. Technically, neither candidate can win without convincing voters that the other candidate is worse. This is one reason why it is critical for the major political parties to perpetuate the myth that Johnson and Stein are irrelevant. If conciliatory voters realize that they have a viable alternative choice, then either or both of the third party candidates could attract enough votes to preclude a victory by either of the two major candidates.

By publicizing misleading polls that prevent Gary Johnson and Jill Stein from qualifying for the Presidential debates, MSM is keeping the third party candidates out of the debates and out of the limelight. In doing so, MSM is directly interfering with the democratic process that is supposed to include full and fair exposure of all viable candidates. The fact that MSM is deliberately misrepresenting to the public that these flawed surveys are accurate is a fraud upon the American people. The fact that it is not a violation of the First Amendment to deliberately deceive the American public means that we should view MSM as nothing more than a form of entertainment.

Jill Stein supporters need to realize that MSM is continuing with its propaganda agenda to prevent her from being included in the debates. They know that given the opportunity, Stein can easily dispel the myth that Clinton is the lesser of two evils. Stein is more relevant than ever. She is the only reasonable choice for those who cannot vote for endless wars, the passage of the TPP, and the continuation of an unaffordable healthcare system in good conscience,.