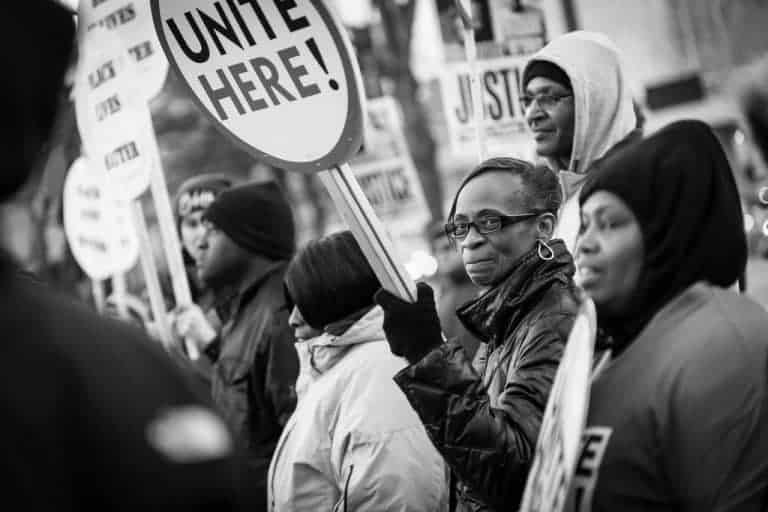 As a former educator in an impoverished non-white area, I contend that we must hold our school system accountable for the regular police violence happening in poor communities of color. Public education often actively marginalizes people who don’t fall in line with what is expected of a “normal student” and the system does not take into account what kids go through. It doesn’t care if they have abusive parents, mental health problems, or have been hungry for weeks.

Any time a student has trouble in school because of legitimate problems at home (remember the pyramid of self-actualization — how can a 12-year-old do math if they’re not safe at home?) the system treats this as a sign of “delinquency” (whatever that means) and the student is generally expelled. This is a system that effectively punishes people for being poor and dealing with the problems that come along with poverty.

This same thing happens with students who drop out either because they’re struggling in school, being bullied, or just don’t like how the oppressive system is victimizing them. Essentially the school system punishes kids for thinking critically.

Once the student is expelled for whatever reason, the administrators essentially see the kid as “not their problem,” and that’s the last this kid ever hears from the system. Many students are left homeless when they get expelled, and no one from the district ever calls to check in- this is because our system is not set up to care about people. Administrators see students as chunks of government money, and they only need x percentage of these kids to graduate to get their paychecks.

Add to that how brutal this system is for the many teachers who care, and you can understand it’s not just hurting students but the very teachers who want to do more, but whose hands are tied because of limited space, time, or money.

In the 1980s a social worker named Rebecca Black moved to Portland to help middle school aged incarcerated youth, and she would tutor them in the detention centers. She found that many of them couldn’t read (this was before affirmative action- the race proportions were probably less favorable to black people than they are now). And she was appalled to find out these kids literally had nowhere to go to school.

Now when you’re talking about the average student struggling with something like depression just trying to make it, that’s bad enough. But when you add in issues of gang violence and drugs, which a lot of students of color end up involved in to feed themselves and their families, it becomes much easier to rationalize kicking these kids out of school instead of helping them. It’s a huge contributor to the stigma around race and poverty: if the kids who are too poor for school are just “delinquents” or “criminals,” then white society is even more able to rationalize its own racism.

One of the biggest problems is that the money is there to help students instead of functionally punishing them for their poverty– it’s just not being used properly. Usually when schools see “budget cuts,” a huge part of the budget cut for the district isn’t coming from the federal government, it’s coming from within the district where administrators are receiving bigger salaries while the teachers and students take the hit. This increases competition between teachers and it can get cutthroat.

In the 80s Rebecca Black started McCoy Academy which was the first alternative school in Portland. It finally started getting funding from the district, then more started popping up. These schools give kids who drop out another chance to graduate.

The staff works with these kids in a way the public school system wasn’t able to. But when “budget cuts” roll in, guess which programs are the first to get cut? Just a few years ago Portland public schools did another budget cut, and now McCoy Academy is basically the only alt school left in that area. Becky still runs it, and I used to work for her. But she relies almost solely on grants and donations so now they can only pay one teacher for over 20 students for the entire day. The wait list is huge.

You can imagine how terrible this is for the teachers and staff, and the thing is that the school districts couldn’t care less. McCoy will call the district and say “Hey, x student just graduated- thought you should know,” and the district doesn’t care. Portland public schools administrators will actually tell families that McCoy is closed when it’s very much still open and just got re-accredited last spring.

It’s bad enough that the district is acting like this, but factor in that the news outlets in Portland won’t cover the problem–the whole system just makes it easier for materially comfortable white people to pretend there’s not a travesty like this happening in their city.

What’s happened with federalizing education is that it’s become yet another capitalist industry where the workers are cogs in a machine. Actually, the New Deal set a lot of this in motion, because it regulated the industry by standardizing curriculum, etc. Workers during the Great Depression saw it as a win because it was the beginning of teachers’ unions. But that was in the 30s, and it’s been almost 100 years.

We need another reform because I think people feel that as long as someone fixed the problem in the past, they don’t have to lift a finger. As long as Lincoln abolished slavery, they don’t have to worry about racism. As long as social reformers brought the economy back from the Great Depression, they don’t have to ever worry about making the economy better. But the irony is that that’s how economic depressions happen in the first place- the populace has it somewhat easy, and so they take advantage of the system with their greediness (see American consumerism), and they ruin the economy. Then the economy starts to hurt black people first because our economy has never allowed them to catch up to whites economically.

No one in society really cares about our economic problems unless it directly hurts their own life, which is why today we’re seeing so many of these problems become clear on social media, and people are standing up to do something.

We’re no longer in a time that we can root for x or y president and then move on with our lives. We’re in a time when we need to seriously figure out our next move or else things may become seriously ruined for the entire world. But in some ways, it’s easier to scapegoat a politician instead of surrendering to the fact that your system is beyond repair.

As for solutions, I’m not sure that more taxation or regulation would do much. The problem here is not lack of money, it’s ethical bankruptcy. It’s that the decision makers in our society are able to legally mandate their own salaries and cut everyone else’s.

It’s that our politicians, down to school board members, are able to get away with using tax money to fluff each other’s salaries instead of caring about the public in any way. And because the same deep pockets at the very top of the education system have the ability to influence mainstream media and the police force, I’d imagine it’s not that hard to pay off a few higher-ups to push an agenda that will fill your pockets; even more, one that’s not going to affect the favor-doer and one that they’re also profiting from.

So really you can’t reform police brutality or our corrupt court and prison system without dismantling the education system and rebuild it the way it should have always been. Education is the key and if you want to know my opinion on how to expedite the process — just ask the kids who’ve been screwed by this system. They understand better than any of us what is going on, but because everyone sees them as “troubled kids” their words are virtually useless.

Nobody will listen to them because it’s easier to invalidate their experiences with a grotesque, inaccurate label. I’m sure it’s easy for cops to excuse executing black people like Trayvon Martin because they’re just robots doing their jobs: feeling empowered to shoot down “delinquents” because the whole society has agreed to view them as such, even if only by way of their silence.