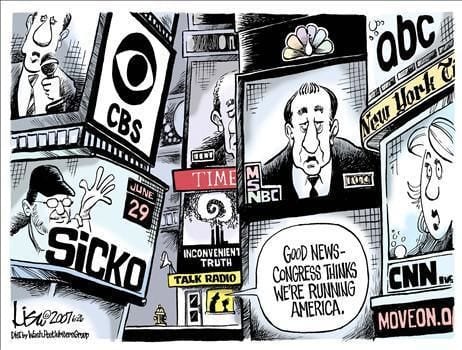 “Our job is only to hold up the mirror- to tell and show the public what has happened.” —Walter Cronkite
Those of us who are old enough to remember watching Walter Cronkite’s evening news broadcast, know that he and other broadcast journalists of the era presented the news as it was. There was no editorializing. There was no moral judgment. There was no prophetizing. The news was what it was.

“The one exception for Cronkite was on the evening of February 27, 1968, when he spoke about the never-ending Vietnam War, and famously said, “Who won and who lost in the great Tet Offensive against the cities? I’m not sure. The Viet Cong did not win by a knockout, but neither did we. The referees of history may make it a draw. It seems now more certain than ever that the bloody experience of Vietnam is to end in a stalemate. But it is increasingly clear to this reporter that the only rational way out then will be to negotiate, not as victors, but as honorable people who lived up to their pledge to defend democracy, and did the best they could.”

Most evenings Cronkite ended his broadcasts with “And that’s the way it is.” That night he ended on a more somber note, “This is Walter Cronkite. Good night.” When President Johnson heard Cronkite’s comments, he was quoted as saying, “That’s it. If I’ve lost Cronkite, I’ve lost middle America.” And a month later he withdrew his name from the 1968 Democratic nomination.

Cronkite had given his opinion: Withdraw from Vietnam diplomatically. He had for the first time stepped out from behind the microphone to add his personal commentary to the news. By doing so, Cronkite issued an implicit license to his journalistic colleagues to interject personal opinions into their factual reporting of the news.

Fast forward to 2016, a time when mainstream media (MSM) has resorted exclusively to partisan and sectarian reporting. Events, which are considered to be a negative reflection upon one special interest, are undisclosed. On the other hand, events, which are considered positive, are woven and polished to shine the most positive light on the favored interest group. Every bit of news output by MSM has been interpolated for public consumption.

A perfect example is the MSM’s propaganda that since Hillary Clinton was not indicted for having classified information on her private server, then she did not break the law. That’s like saying if mom didn’t catch you stealing the cookies from the cookie jar, then you didn’t steal them. Another recent example is the MSM cover-up of the 2016 Presidential primary election fraud in which it [MSM] deceitfully claims that the exit polls were not accurate, and therefore there was no election fraud. In fact, scientifically conducted exit polls are very accurate.

In 2012, a Gallup poll found that Americans’ distrust in the mass media had hit a new high, with 60% saying they had little or no trust in the mass media to report the news fully, accurately, and fairly. Four years later, that number has skyrocketed to 94 percent. Even reporters are now admitting that the major networks have been corrupted by political and corporate interests. Former CBS reporter Sharyl Attkisson even went so far as to say,

“There is unprecedented, I believe, influence on the media, not just the news, but the images you see everywhere. By well-orchestrated and financed campaign of special interests, political interests and corporations. I think all of that comes into play.”

So WTF happened between Cronkite’s day and today? No, it was not because Cronkite reset the bar by giving his opinion on the Vietnam War. He clearly labeled what he said as a personal opinion. What did happen was: The annihilation of the Fairness Doctrine.

The Fairness Doctrine actually grew out of the Radio Act of 1927 in which Congress directed that the Federal Communications Commission (FCC) should only issue broadcast licenses when doing so served the public interest. In 1949, the FCC interpreted this more strictly to mean that licensees should include discussions of matters of public importance in their broadcasts and that they should do so in a fair manner. This meant that for the privilege of being granted a license, the radio (and TV) owner had an obligation to: (a) devote some of their programming to controversial issues of public importance and (b) allow the airing of opposing views on those issues. And, therefore, political programs were required to include opposing opinions on the topic under discussion. It also mandated that any broadcasters who endorsed a particular political candidate provide an opportunity for other candidates to respond. Thus, whenever one side of an issue was presented, the opposing view was always given.

The Fairness Doctrine was a product of the media world of 1949 during which lawmakers were concerned that the three main television networks—NBC, ABC, and CBS—could misuse their broadcast licenses to set a biased public agenda. The whole purpose of the Fairness Doctrine was to level the playing field and ensure that the public had exposure to both sides of an issue.

In 1969’s Red Lion Broadcasting Co. v. FCC, journalist Fred Cook sued a Pennsylvania Christian Crusade radio program after a radio host attacked him on air. In a unanimous decision, the Supreme Court upheld Cook’s right to an on-air response under the Fairness Doctrine. Thus, SCOTUS provided full endorsement to the provisions of the Act.

The doctrine stayed in effect and was enforced until FCC chairman Mark Fowler challenged it during Reagan’s second term. In 1987, the FCC panel repealed the Fairness Doctrine altogether with a 4-0 vote. The FCC vote was opposed by members of Congress, who said the FCC had tried to “flout the will of Congress.” A bi-partisan fight ensued, but in June 1987, Congress passed a bill that attempted to preempt the FCC decision and codify the Fairness Doctrine. Unfortunately, all that came to an abrupt end when President Reagan vetoed the bill.

The decision to rescind the Fairness Doctrine has been credited with the explosion of conservative talk radio in the late ’80s and early ’90s. It was also when American society lost accountability for one-sided opinions spread over the airwaves. Now, radio and TV broadcasters are no longer the presenters of fact and unbiased news. But, rather they have become the grandstand preachers of whatever political gospel or special interest line that they intend to sell. The public is no longer treated as intelligent, logical, thinking people, who draw their own conclusions. Instead, we are viewed as idiots, incapable of independent thought, and who are to be indoctrinated with whatever twisted facts and convoluted logic the profiteers feed us.

The repeal of the Fairness Doctrine marked the beginning of the charismatic radio personality, Rush Limbaugh, who had gotten his start in 1984 at a small radio station in Sacramento. Initially, he was just a small-time radio host, a “Willy Loman” going nowhere fast. With Fairness Doctrine gone, and the ability to attack and support various politicians unfettered by the burden of a full and fair reprisal, Limbaugh’s career took off like a rocket. Within a year, he moved to NYC to launch his national syndicated program. And, the rest is history.

The repeal of the Fairness Doctrine is yet another neoliberal policy that we, the people, need to reset and take back impartiality. MSM should not be treated as a private enterprise with the unfettered right to sell propaganda that is exclusively in the interest of its owners. Since MSM serves the public, it must be regulated so that it best serves the public’s interests. The reinstatement of the Fairness Doctrine must be on the agenda of all Real Progressive candidates/politicians in order for us to take back our Democracy.