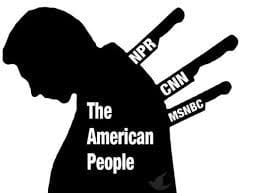 MSM Blackout: All the News that is Not Fit to Print

In her book, “Passages: Predictable Crises of Adult Life” Gail Sheehy discussed the theory that to become well-adjusted human beings, we must successfully “pass-through” each of the developmental phases in life. Each developmental phase has its own issues, which, if not properly resolved will interfere with the passage through to the succeeding developmental phase. She explained that a mid-life crisis is a common symptom of not successfully passing through an earlier developmental phase. The United States is currently in the middle of an acute mid-life crisis for reasons related to Ms. Sheehy’s theory of successful passage through various phases. Of course, a country’s life cycle is different from that of a human. However, there are enough similarities with which to make a comparison. For example, the American citizens have not in any way come to terms with the almost two-decades-long wars in the Middle East, which have been perpetrated by their country, and which have resulted in the deaths of hundreds of thousands of innocent people. The Mainstream Media, which is supposed to act as the gateway to knowledge, and subsequent healthy dialogue regarding the pros and cons of the conflicts raged, have been suspiciously silent regarding these wars.

Americans were given a glimpse of the initial bomb strikes on Iraq, and many at the time treated the destruction of one of the world’s oldest civilizations like it was some sort of Fourth of July celebration. As Iraqi antiques were pilfered, and historic buildings destroyed, Americans waved their flags and went on with their daily lives, completely oblivious to the almost complete destruction of a nation-state. MSM successfully concealed from Americans the news regarding thousands of American soldiers and Iraqis maimed and killed. Instead, the wars were portrayed as “sterile” and the surgical airstrikes only kill the “bad guy.” On the contrary, more than 80% of those killed during these wars have been innocent civilians.

Since 9/11 Americans have continued this death and destruction in a dozen countries in the Middle East. Whether we are dropping surprise attack drone bombs from the sky, military airstrikes, or on the ground death and destruction, the US continues with its unethical, immoral, and illegal wars on innocent Middle Easterners. And, even more, despicable is that we have enjoined with other immoral, unethical regimes in their destruction of their own people. And, even viler than that is that we are arming and supporting those same groups that we subsequently condemn. After we arm ISIS, we use that fact as an excuse to kill them, as well as innocent people. It is all a plan to enrich the corporations. And all of us, including the worst of jihadists, are just pawns in the corporate war games.

These same corporations also own the news media. Since the motive is to continue these war games unabated, they carefully conceal the death and destruction caused by these wars from the American people. Although little snippets get out occasionally, for the most part, Americans do not have a clue as to what is going on. If they knew the truth, any American with a conscience would be truly shocked. The whistleblower former drone bomb pilots have said, for example, that they were commanded to drone bomb those who were attending the funerals of those who had been killed by previous drone bombings. This type of story is not covered by the MSM, except to claim that our enemies are doing it. Also with the drone bombings, there is no attempt whatsoever to count the number killed. Innocents who are killed during the strike against an alleged terrorist target are written off as “collateral damage” and not even acknowledged.

For the most part, the American people completely cooperate with the media’s purposeful concealment of the murder of thousands of people. Why disturb their nice quiet lives thousands of miles away, when they they can live in innocent blissfulness? Many Germans did the same when the Nazis were raising havoc both locally and in neighboring countries. History has not judged them well.

MSM fails to acknowledge that almost 1M American soldiers have sustained injuries since 9/11. Instead of honoring the soldiers who have died and been wounded as part of the 9/11 commemoration, MSM interviews the children of families of the original 9/11 victims, who received $1M. In doing so, MSM continues to project the image of America as the victim in pursuit of revenge against the perpetrators. In fact, none of the millions who have died as a direct or indirect result of our wars had anything whatsoever to do with the 9/11 terrorist attack.

The media is engaged in a similar blackout regarding negative issues surrounding one of the major party Presidential candidates, while critically scrutinizing every aspect of the other major Presidential candidate. This fact sheds light on which candidate is the corporate darling. When a tape surfaces of the protected candidate talking about nuking and annihilating all of Iran or exercising military force against Russia, or laughing about killing Gaddafi, MSM simply ignores all of them. By ignoring the candidate’s extreme calls for US aggression against other countries, MSM is essentially treating the tapes as irrelevant, and not worthy of the news. On the contrary, what can be more germane than a potential POTUS all but declaring war on two countries?

In contrast, MSM focuses its undying attention on the other major candidate. His locker room trash talk is the main topic of discussion for days and even becomes a topic during the Presidential debates. Americans spew out phony outrage and call him a misogynist. In a recent campaign speech, Michele Obama said she was, “shocked to the core” by this candidate’s trash talk. However, the fact that her husband commands the drone bombing of innocents obviously does not rise to this level.

Unfortunately, for millions of Americans, the MSM is their major source of the news. Thus, in their minds, if MSM is not discussing it, then it either didn’t happen, or it is irrelevant. And, of course, the more MSM keeps these followers in the dark regarding the important issues, the more oblivious of the facts these Americans become. Not surprisingly, many of those who follow, and put their credence in MSM, support the MSM-sponsored candidate, Hillary Clinton.

With the MSM blackout, the only news resources for those who do not put Clinton on a pedestal, are the conservative media outlets, Indie news outlets, and Wikileaks. With few resources to rely on, Clinton nonsupporters must rely on conservative media as a source for their OP posted on social media. When they do so, her supporters gleefully mock the source, the content, and then accuse the author of being a Trump supporter. But, in doing so, they unconsciously perpetuate their own cognitive dissonance; and frustrate those who don’t agree with them.

Fortunately, Wikileaks has disclosed a plethora of information, most of which should disqualify Clinton from being POTUS. One example is her involvement in the rigging of the Democratic primary, which was a treasonous violation of our democracy. The fact that Clinton would even associate with people who were involved in such a thing proves that she has no respect for human rights and democracy. In response to the allegations of Clinton’s connection to election rigging, MSM put forth one article that claimed that because exit polls are inaccurate, there could have been no election rigging. That erroneous article was enough to put the subject at bay, and it was never again addressed by MSM, which continues to ignore the Wikileaks disclosures. Their followers view Wikileaks with suspicion, and thus, those who should be learning the most from the disclosures, are actually learning the least.

The issues such as American warmongering are concealed, and therefore open and honest discussion is impossible. Likewise, Clinton’s unpunished misdeeds, her aggressive rhetoric, and even her health issues are taboo. There is little to no discussion regarding any of these matters. We, as a country, are completely dysfunctional in not addressing the serious matters that lie before us. Without open discussion, there’s no consensus or resolution of the issues. Instead, there is anger, frustration, and discontent. Just as a person who has not passed through the developmental stages ends up in a crisis, so has the United States. And we, as a country cannot successfully move forward until we address and resolve these serious matters.

As Thomas Jefferson famously said, “An educated citizenry is a vital requisite for our survival as a free people.” We are no longer being educated of the facts, and our freedom is gone. Clearly, Americans have been led astray by MSM in order to continue with the for-profit wars. Americans need to wake up and take their country back.