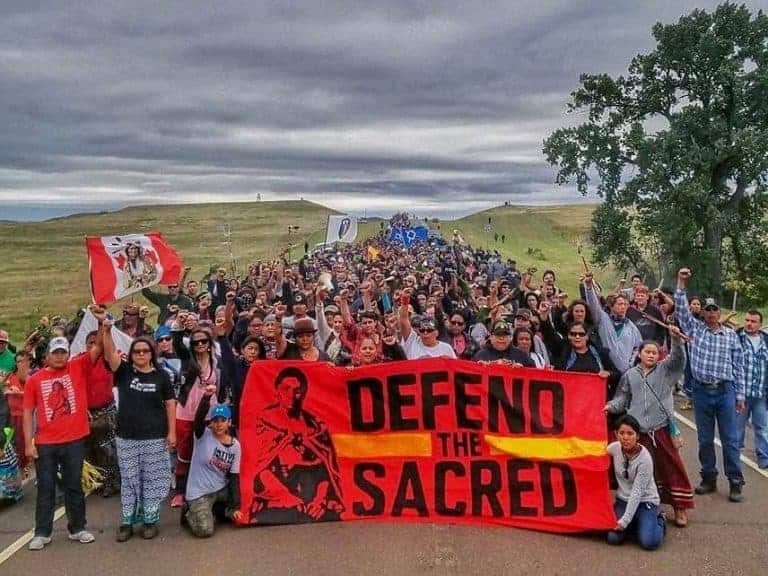 In all of my reporting on the deception of the US media, I can honestly say that I’ve never been as disgusted with them as I am today. If any of their “journalists” had an iota of integrity, they would resign this moment in protest, lest they become the wretched instruments with which the United States’ brutality against our water protectors at Standing Rock is being concealed from the public — but, not only have they remained complicit in this violence, they’ve gone one step further and are now justifying it!

On October 30th, after police shamelessly orchestrated a violent military assault on unarmed protesters over the weekend, CNN released this disgusting article:

Rather than inform the public about the ongoing military buildup against the thousands of unarmed water protectors who are against the pipeline, CNN chose to share with their readers an interview with one guy that does indeed show that “not all Standing Rock Sioux are protesting the pipeline.” This is what you’re all supposed to believe: that CNN thought the public wouldn’t be interested in the unprecedentedly massive demonstrations against the desecration of sacred land by thousands of courageous people & over 100 indigenous nations but suddenly, when militarized police violently disperse them, decided that the public really needed to be informed that this one guy named Robert wasn’t 100% stoked about the protests. I guess that “not all” is some kind of journalistic code for “Robert.”

I’m just going to state the obvious — CNN didn’t publish this article because it was newsworthy. They published it because most people only read the headlines of articles and they knew that, statistically, this article was going to give the impression that native people are divided on whether or not the pipeline might be a good thing or a bad thing. And the timing wasn’t coincidental, either. CNN has become just another public relations firm, rationalizing the unilateral actions of a repressive police-state that’s being peddled by democrats & republicans alike.

Of course, it’s not just CNN…

When I did a search of the words “Standing Rock” on MSNBC’s website the only stories that showed up from September are a short report on the temporary halt of construction on September 10th, a 6-minute segment on Amy Goodman’s arrest, an 8-minute segment on Donald Trump’s financial ties to the pipeline on the 26th, and a 6-minute interview with Mark Ruffalo on the 27th. Evidently, the most interesting thing about #NoDAPL is whether or not it has something to do with Donald Trump, followed by how many celebrities may be involved.

My search of ABC’s news website yielded absolutely nothing in the first 3 pages of results and our lives are far too short to waste time talking about how FOX “News” has reported on the Dakota Access Pipeline — so, if it’s all the same to you, I’ll just skip that one.

CNN, MSNBC, ABC, & FOX Should All Be Ashamed of Themselves

These networks have devoted a pathetic amount of time to covering the courageous struggle of the people who are defending our water at Standing Rock and each second of it has either been because a celebrity has forced their hand or because they’re reassuring the public that, even if it’s not pretty, it is normal & acceptable for militarized bullies to abuse the rights of indigenous people on behalf of — no, not justice, or freedom, or even security — but on behalf of energy corporations.

Now, because the spineless US media lacks the courage to say it, I suppose that, as an actual journalist, it has become my job (and your job, too) to say it for them. Here it goes — the water protectors are not rioters or hooligans or hippies — they are unarmed human beings who are courageously taking a stand against the construction of the Dakota Access Pipeline. This is not a “dispute” & “tensions” are not “escalating” between “protestors” & police — unarmed people are being ruthlessly assaulted by the police-state that we fund with our tax dollars. These “protesters” are not “trespassing” — the pipeline is trespassing on native land but the US government only honors those treaties that are convenient to honor because they have more guns than anyone else.

Our police have become nothing more than ruthless, state-backed mercenaries who answer, not to you or me, but to the abstract & immoral interests of corporations who don’t give a damn about you. If you stand up to defend the environment or the rights of human beings, they will hurt you, lock you up, & (let’s be real, here) even kill you, if they need to & can get away with it — and the media’s new job description is to make sure that no one knows or, at least, that no one cares.

Recent Articles by John Laurits
Progressives, Greens, & Berniecrats: Unify or the Movement Will Break (10/25)
False Story Alert: #PodestaEmails Do *Not* Show Sanders Was Paid Off! (10/16)
US Claims Russia is Influencing the Election by Telling the Truth? (10/12)
How the 1% Rigged the Debates Against 3rd-Parties (9/20)
How Both Parties Ignore the Majority (9/14)
How To Destroy Democracy: A Guide to the Electoral College (9/2)
Why Sanders-Supporters Are Mad (& Why You Should Be, Too!) (8/22)
Why Aren’t Americans More Infuriated? (8/16)
From the Heart of America: #NeverGiveUp (8/8)

*If you appreciated this article, please consider buying John a cup of coffee at this link to his PayPal or, if you find yourself enjoying his articles often & if you have the means, consider pledging a monthly 1$ or $3, using John’s new Patreon page…