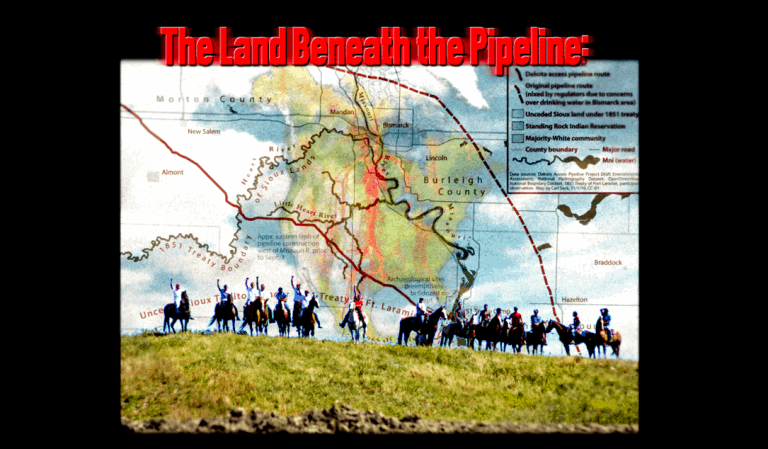 The Land Beneath the Pipeline: Standing Rock & Obama’s Chance to #HonorTheTreaties

Although major media outlets continue to betray their cowardice by remaining silent about the Dakota Access Pipeline & the violence against unarmed demonstrators that enables it, disingenuous articles are nonetheless being written to muddy the issue. Pipeline apologists, like Scott Gates, are questioning whether native peoples have any right to be upset about the construction or whether they have any legitimate claim over the land beneath it. To educate these champions of the fossil fuel industry, it seems that a US history lesson is in order — especially since we find ourselves in the shadow of Thanksgiving Day, a celebration which ought to remind them that the plundering & abuse of indigenous peoples is basically the “default setting” of the United States…

The Land Beneath DAPL: Who Does It Belong to?

I could’ve written a long & boring article, delineating boundaries or making nuanced legalistic arguments — but I’d rather get right at what should be the heart of the issue and that is the fact that none of this would be happening if the United States would only honor their word by keeping the treaties they’ve signed. To learn more about the indigenous history of North Dakota & our government’s history of broken promises there, I interviewed a good friend of mine — Andy Laverdure, an Anishinaabe man who has been a judge on Turtle Mountain Reservation in North Dakota for 8 years.

The Horse Creek Treaty of 1851

Two months after we first met — when I drove from the DNC protests to Turtle Mountain, which is the heart of the continent — I told Andy of my plan to write about treaties and he graciously agreed to another interview. “People have a really hard time understanding the concept of treaties,” Andy said, “They understand treaties with other countries but they have a hard time understanding the status of treaties for Indian tribes.” From my discussion with Andy, I learned that the treaty which is particularly relevant to the situation in Standing Rock is the “Horse Creek Treaty” of 1851, which was ratified by the senate shortly after being signed by representatives of 8 different tribes & 2 commissioners appointed by the US president. In exchange for yearly payments, the natives allowed the US to build a number of forts & roads on their land but — most importantly — the treaty resolved the territorial disputes between those who signed it. In article 5, the United States recognizes native sovereignty over their territories and agrees to respect their borders, which are then described in great detail.

The US Promised Sovereignty & Protection of Native Land

The treaty also includes this agreement, in article 3:

In consideration of the rights and privileges acknowledged in the preceding article, the United States bind themselves to protect the aforesaid Indian nations against the commission of all depredations by the people of the said United States, after the ratification of this treaty.

“Depredation,” a word which I admittedly had to look up, is defined by the Oxford Dictionary as an act of “attacking or plundering” and is synonymous with “devastation,” “destruction,” & “damage.” When the federal government negotiated & signed the Horse Creek Treaty, not only did they promise to respect the natives’ sovereignty but they committed to protect that land from any attack or plundering by US citizens, too.

Individuals make contracts or agreements but treaties are — by definition — between countries.“It’s really complex to understand treaties,” Andy said, when I asked what he thought people weren’t understanding about the issue, “A person has to understand a lot of international law.” When the United States signed the Horse Creek Treaty & others like it, they were negotiating agreements with other, equally sovereign nations. “That’s what a treaty is!” Andy laughed, stressing the last syllable the way one does when explaining something for the 100th time. “And that‘s what people don’t understand. They think that treaties with other countries & treaties with Indian tribes are two different things — but it’s no different than having a treaty with Canada or England.”

But What Happens When Other Countries Break Treaties with the United States?

Hypocrisy. Hypocrisy is what happens when other countries break treaties with the United states.

In July of 2014, Barack Obama’s administration accused Russia of violating a cold-war era treaty which restricted production of specific types of missile-delivery systems. The president was miffed enough to personally write a letter directly to Vladimir Putin and White House spokesman Josh Earnest told the public that the breach of treaty “merits the serious attention of the leaders of both the United States and Russia.”

Earlier that year, US public officials had been freaking out because they believed the Syrian government had broken a U.N. treaty. “Obviously there needs to be an investigation,” said a State Department spokesperson, matter-of-factly, while Senator John McCain exhorted the White House to “force a price” for Syria’s alleged breach of the agreement.

And, of course, who could forget the recent drama in Ukraine? Remember? That was the time Vice President Joe Biden flew to Poland so that Russia could hear him accuse them of breaking international treaties by annexing Crimea, right before we teamed up with Europe to place travel bans & asset freezes on Ukrainian & Russian officials. Russia’s “brazen military incursion,” said Biden, was “nothing more than a land grab” which had “ratcheted up ethnic tensions” Wait… so, the United States thinks it’s wrong for large countries to disregard international treaties by forcibly taking land from sovereign neighbors and they’re concerned that it’s making ethnic minorities tense?!

Among the powers granted to the president by the constitution is the power to negotiate & ensure the enforcement of international treaties. That means that Barack Obama has the ability to halt the construction of DAPL with a tiny stroke of his fancy, presidential pen — and, if he really believed what he himself says in public, he would do so. There’s no need to prattle on about easements nor is there any need for lengthy arguments in favor or against– for the United States, the decision is simply whether or not we’re going to continue the shameful American tradition of cheating & straight-up lying to our indigenous communities and then laughing all the way to the bank.

It’s not complicated — this is about doing what’s right.

It’s Not Just About Water: Standing Rock is Part of a Greater Issue

“These oil & fracking companies — everything that they’re doing affects all of us,” Andy says, “Indian & non-Indian, alike.” He spoke to me about the plights of other indigenous communities, the challenges they faced, & about how Standing Rock was one among many similar struggles around the world. People have come from all over the earth, hundreds of nations are gathered at Standing Rock, and — though the reasons & causes are many & unique — their struggles here seem to have mysteriously become the same. And now, whatever happens at Standing Rock, it will surely be felt — not just in North Dakota — but around the world. I asked him what it was that made him want to drive each week all the way to Standing Rock. He said:

“They’re destroying the planet. This isn’t only about water — although the water is absolutely the most important aspect of it. There’re all these other issues, too. The things that are happening in Standing Rock are things that affect everybody in every state — in different countries, nations. We’ve got to get a hold of this — we’ve got to stop these guys. No matter where they are, no matter what — they have to be stopped.” â Andy Laverdure

“And do you believe that we will?” I asked, “That we’ll stop them?” And with literally no hesitation, he responded, “Oh yeah, we have to!” “This isn’t something where you just stand up for a few days & then stop, once it’s resolved a little bit,” he explained, “What’s scaring them right now is that this is becoming part of a greater issue…”

And I’ll leave you with that — thanks for reading.

P.S. If you have a minute, please take a moment to watch the video I made for my new GoFundMe, “Send John Laurits to Standing Rock!”

Other Recent Articles by John Laurits

The US Media is as Guilty as the Police at Standing Rock (10/31)
US Claims Russia is Influencing the Election by Telling the Truth? (10/12)
How the 1% Rigged the Debates Against 3rd-Parties (9/20)
How Both Parties Ignore the Majority (9/14)
How To Destroy Democracy: A Guide to the Electoral College (9/2)

Notes Here’s the link to Scott Gates’ Facebook note (which has 10k+ shares, at the time of writing). It’s an exhausting, legally-minded smear against the water protectors at Standing Rock.
Read my first interview with Andy Laverdure in the article, “From the Heart of America: #NeverGiveUp”

*If you appreciated this article, please consider buying John a cup of coffee at this link to his PayPal or, if you find yourself enjoying his articles often & if you have the means, consider pledging a monthly 1$ or $3, using John’s new Patreon page…