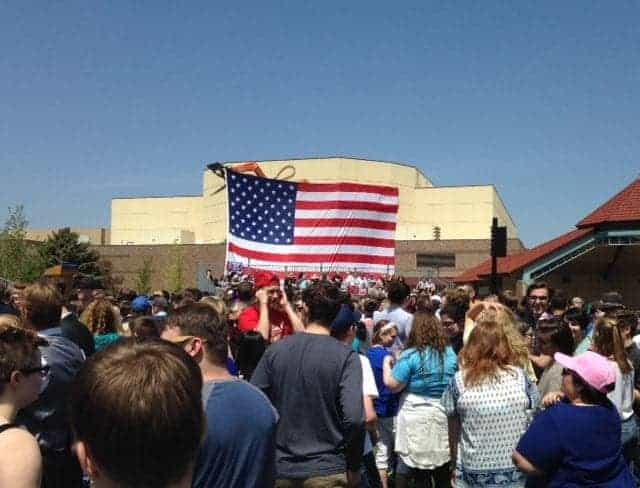 Democracy in America is only a word now; nothing more than an ironic name for one-half of our openly corrupt government. The illusion of choice that is the two party system grew stagnant a long time ago, and in its stagnation it became repugnant. We are a ruled people. We have been so for longer than we care to admit because we are afraid. We are afraid of our masters, the rich and important people who write our laws yet walk above them. We are afraid of their power—and that’s the trick; it’s not actually their power, it’s ours. We are their power. We sustain them, for now. They want us out of the conversation, though; that much has been made abundantly clear over the last year and a half. We’re treated as livestock and encouraged to behave accordingly. The American people are not led, we are herded. The Democrats defied the will of the people, and in doing so allowed a man to propel himself into the White House by harnessing America’s helpless rage.

They don’t care about our safety, or our water, or our voices. The Democrats and the Republicans both work for the oil industry, and the weapons industry, and essentially anybody else who will fund their next campaign. President Obama could stop the Dakota Access Pipeline with the stroke of a pen, but he hasn’t. Donald Trump is an unpredictable man. It is still too early to tell what kinds of actions he will take as President. There have been signs, but regardless of the choices he makes over the next four years, his election has already served as a lightning rod. Change is coming to America like a force of nature. It won’t be the change we heard about in President Obama’s beautiful campaign speeches. It’s just too late for that; the anger of the poor has been ignored for too long. This is a change that will destroy us if we let it– but it can save us if we make it.

Drop the Two Parties. Boycott them; refuse to participate in their primaries. Ignore their media circuses. Stifle their echo chambers. Replace their narrative with our own. And read. Read every day. Read for hours at a time. Read outside of the established narrative. Read the things that people in power don’t want you to read. Read Wikileaks. Be bold. Violent racism is walking openly in America again, fueled not only by what Trump’s election has come to represent but also by the constant repetition of a dangerous narrative, propagated by a media machine intending to drive progressives to Clinton out of fear. In their arrogance, the machine’s operators never stopped to question what might happen if she lost. Now people across the nation are paying the price for this manipulative political “strategy”—people with no access to justice inside this corrupted empire.

It is not enough to wear a safety pin. The time for symbolic stands has passed. It’s time to prove that the American people are still a force to be reckoned with. To prove that we are still here.
Organize to protect each other. Organize both locally and nationally. Use the internet, and not just Facebook and Twitter. Utilize forum based sites, like Reddit, and Pastebin, or the Anonymous-affiliated site, Minds.com.

It’s time to move outside of the established political system. We have already been shown the door. It’s time to stop asking and start doing. If you are a decent person, if you give a damn about the world in which you live, then it is time for you to stop watching it from the sidelines that only exist in your mind. We don’t need to ask for permission to speak. We don’t need to ask the Democrats or the Republicans or their bosses for anything. They need us to think we do, however. That’s what their control comes down to. Smoke and mirrors. They control what we see and what we hear, and that’s how they control the conversation. All we need to do is stop focusing on them.

It doesn’t matter what your voter registration says. If you aren’t rich, or powerful, or ruthless, then you aren’t the Democrats or the Republicans they care about. We need to find common ground. We the people. Regardless of your political views, if what you genuinely want most is what’s best for our country, then we need to work together. There is more that unites us than divides us. We are a generation of people who have been assured that their voices don’t matter; that they shouldn’t. We have been shut out of the two party system. We are the defiant, abandoned dreamers of America. We are the Third Party.