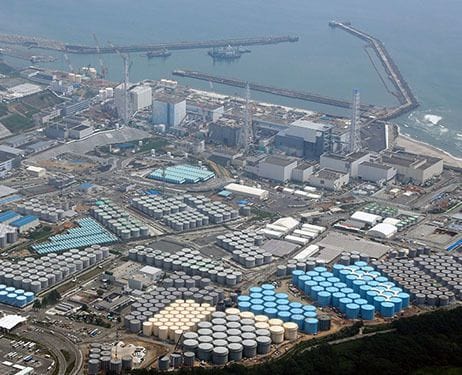 Fukushima and the Pernicious Lie of the Sustainability of Nuclear Power

Fukushima Daiichi was back in the news this week after another offshore earthquake triggered a new tsunami warning in the prefecture of the tattered nuclear plant. Fortunately, this time the tsunami was miniscule compared to the one that led to the original meltdown, but the problems at the plant, like the problems with nuclear power in general, remain both omnipresent and potentially catastrophic. It is imperative that we, as Real Progressives, realize that nuclear power is neither green nor sustainable, and that, like the petroleum infrastructure, we are forced to live with the myriad of established installations. We must look to truly sustainable options for any new construction and any incidence of governmental subsidy.

On March 11, 2011, a 15-meter tsunami triggered by a 9.0 magnitude offshore earthquake tore through the coastline of Fukushima prefecture, Japan. Earthquakes and tsunami are not uncommon in the region; however, it didn’t stop anyone from building a nuclear power plant atop a bluff overlooking the ocean where the tsunami struck. Although the earthquake and tsunami were clearly an “act of god” due to the failures and incompetence of engineers and corporate management, the resulting nuclear meltdown and accompanying radioactive releases were wholly manmade disasters. A resulting report concluded “[All parties] failed to correctly develop the most basic safety requirements” such as assessing the probability of damage, preparing for containing collateral damage from such a disaster, and developing evacuation plans for the public in the case of a serious radiation release. [1]”

Despite the historical record of tsunami occurring in the region on average every 12 years (with the highest in the past century being 35 meters), the nuclear plant at Daiichi was constructed at only 10 meters above sea level, with the cooling pumps located at only 4 meters elevation. [2] In the 1990s, while the plant was already in operation, scientific evidence emerged that confirmed the possibility of a large earthquake creating a 15+ meter tsunami specifically in the Fukushima region. TEPCO, the agency in charge of the reactors, failed to revisit their emergency protocols for shutdown or evacuation and did not rethink the location of their cooling pumps. This inertia of failure of the corporate bureaucracy would prove to be fatal.

The reactors themselves at Fukushima Daiichi survived the earthquake but their cooling and electrical systems succumbed to the subsequent tsunami. The placement of the cooling pumps and the backup electrical systems (in basements) made them especially prone to flooding. The reactors were shut down, but continued to create considerable heat (2 ” 3 MW per reactor) due to residual fusion reactions. For this reason, cooling water circulating in the reactor cores is critical to maintaining their integrity. Without the cooling pumps the water levels dropped and exposed the cores to air, resulting in a buildup of internal heat that resulted in the melting of the fuel rods. The fuel rods in unit 1 melted completely through the bottom of the containment vessel into the concrete below, and units 2 & 3 at least partially melted. The zirconium cladding on the structure in unit 1 began to create hydrogen gas due to the high pressure and temperature resulting from the meltdown, and subsequently produced an explosion that further exposed the environment to several radioactive particle release events. The incident was rated a 7 on the International Nuclear and Radiological Event scale (its most serious designation). [3]

The subsequent containment, shutdown, and cleanup operations quickly proved the fact that the nuclear power industry (as well as the scientific community at large) was significantly unprepared for an event of this magnitude. Despite the number of operational reactors world-wide and the designation of nuclear sites as possible terrorist targets, it appears that there was either little preparation made to address the shutdown of a partially destroyed reactor or that preparation was wholly inadequate. To determine the extent of internal damage, a series of robots have been sent into the wreckage. These robots, however, proved inadequately robust to operate in the extreme conditions present. The radiation attacked the wiring and circuitry disabling their ability to operate. To this day, they still do not even know with any certainty the location of the melted fuel from unit 1, as all technology has apparently proven inadequate to assist this seemingly simple task. Without knowing that, complete decommissioning of the reactor (or even a meaningful estimate of when it could be accomplished) is virtually impossible. [4]

The legacy of the cooling system and reactor vessel breeches is readily visible at the site today. Thousands of water tanks cover every square foot of open space, arranged in neat rows like electrolytic capacitors on a circuit board. The damage to the reactor vessels was so complete that restoring the cooling pumps created another major ecological nightmare. Once the cooling flow was returned the water could no longer be contained within a sealed system. TEPCO scurried to pump up the leakage as it escaped but had no place to store it on site nor any way to transport such voluminous hazardous cargo. The forest of tanks at the site is only a feasible solution for the present, however, seeing that they have run out of room to build new ones and the storage capacity in the existing tanks has been reached. Their answer for the lack of storage seems incredulous, even from a company who has demonstrated repeated incompetence and criminal activity. They want to simply release it all into the ocean. [5]

TEPCO claims to have isolated the most hazardous radioactive isotopes from the waste stream (cesium and strontium) via filtration, only leaving tritium behind. Tritium is a radioactive isotope of hydrogen and can be present in virtually any molecule that hydrogen can. When tritium is incorporated in water (tritiated water), it can be rapidly and effortlessly taken up by biological tissues. While radiation from tritium outside a living body would pose close to no damage (it could not penetrate the skin), once within the body it is far more pernicious. Tritiated water can also very easily evaporate and become airborne as a vapor, leading to inhalation by living organisms, both plant and animals alike. Even though the concentrations of tritium in the waste water at Fukushima is minuscule, the volumes of water present waiting to be released mean that the overall amount of tritium is far more substantial.

Since it is against maritime law to build a pipeline to dump waste deep at sea, TEPCO plans to release it all from the shore. This means that the local ecosystem will bear 100% of the impact from the releases, and only through slower diffusion into the volume of the Pacific Ocean will it be dispersed. Not to mention it begs the question that, if this waste was safe to be dumped, why did they go to all the trouble of building thousands of tanks to store it in the first place? Additionally, the word of TEPCO is virtually meaningless at this point and there must be independent verification that the cesium and strontium have indeed been removed as well as of the amounts and rate of the efflux of tritiated water from the site.

It is difficult to impossible to estimate the ecological impact from the planned releases of tritiated water due to the paucity of research data available. The clear majority of research on the impact of radiation has been limited to exposure and subsequent health effects to humans. It has been assumed that whatever was adequate to protect a human would be equally as effective to protect, say, a mollusk. The only thing clear at this point is that we need more studies to make any meaningful conclusion. To allow the release of tritiated water without actually understanding the impact seems to rank somewhere between “the height of folly” and “criminal misfeasance.”

Overall, nuclear power is neither green nor sustainable. In fact, nuclear power can only be remotely considered “carbon neutral” in its immediate operational phase. In other words, you must completely ignore the mining and processing of the ore to achieve fissionable material, as well as the construction of the plants themselves (with the vast amounts of concrete involved). Likewise, the sustainability of nuclear power is negated by the lifetime of the danger of the waste generated by the process and the lack of long-term solutions for its safe storage.

While clearly the number of operating nuclear plants (and the time required to decommission one) dictate that for the foreseeable future they will remain a part of the energy portfolio of the western world, like petroleum we must cease new infrastructure construction and make plans for the elimination of those plants currently in operation. The favorite argument of the nuclear power proponent is the safety record of the majority of plants currently in operation. To counter that we must raise the case of Fukushima Daiichi as what can happen when things go wrong, and remind them of the inanity of any guarantees of safety over the lifetime of the required storage of the waste.

The other danger involved relates to the plant operators themselves. Huge corporations, when given secrecy by governments, tend to extremes to maximize revenue by minimizing operational expenses, as happened at the Davis-Besse reactor. [7] Without a public eye on their operations, we can only find out about their mismanagement when a catastrophe such as Fukushima happens. We simply cannot conscionably rely upon their honor and integrity. To steal the aphorism of the George W Bush administration, “we can’t afford for the smoking gun to be a mushroom cloud.”