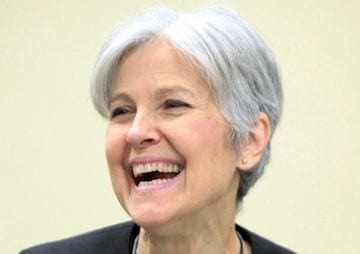 The Amazing Hubris of Hillarites

There seems to be no end to it. In its current incarnation, Clinton’s sheep are convinced that Jill Stein’s recount efforts in Wisconsin, Pennsylvania, and Michigan are centered around trying to prove out Clinton wins. Sure, Hillarites, because that’s what we’ve really wanted this whole time – Clinton in the White House. I’m going to try and help you pull your heads out of the sand as a free public service.

Stein was polling nationally at 3% and came out of the election at 1%. A recount will provide a clearer picture of how much of the vote Stein got. At 5%, the Green Party would receive 10 million in public funds in the next general, so not only is that a goal for the party, but also an opportunity for the establishment to minimize the percent of votes for the Green Party to keep their two-party trap in place. Given the Democrats’ penchant for election fraud, a recount is essential in these 3 states to determine more accurately what percent the Green Party got in the general. It’s much easier to strategize for a 2% gain in the next election than for a 4% gain.

Michigan: Stein polls at 3% in half their polls, averages 2.3% in all polls. Results of the general were 1.1%. When you’re striving for 5%, that’s worth a recount: http://www.realclearpolitics.com/epolls/2016/president/mi/michigan_trump_vs_clinton_vs_johnson_vs_stein-6008.html

Wisconsin: Polled at an average of 2%, general results were also 1%: http://www.realclearpolitics.com/epolls/2016/president/wi/wisconsin_trump_vs_clinton_vs_johnson_vs_stein-5976.html#polls

Pennsylvania: A drop from 1.5% to .08 percent: http://www.realclearpolitics.com/epolls/2016/president/pa/pennsylvania_trump_vs_clinton_vs_johnson_vs_stein-5964.html

These are vast numbers of likely votes that apparently disappeared like a fart in the wind. Even if a recount only brings Stein from 1 to 2 percent, it makes a big difference in the allocation of funds and resources in 2020. We understand your inability to accept the results of the general, Hillarites. She was your anointed queen who had fixed the primaries to win before a single vote was cast. It was a slam-dunk that rimmed out and you’re angry about it. But this isn’t for you at all. This is about building third-party relevance. Thank you, though, for your misinformed financial contributions to the recount cause. We’re spending your money wisely. And if there’s any money left after the recounts, we get to use it for 2020, so for once, you’ve actually done something for the Progressive cause whether you intended to or not.  Much appreciated.