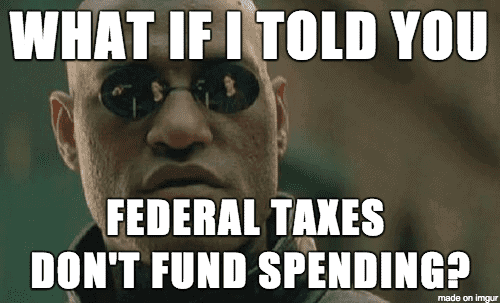 What the Government Doesnt Want You to Know: It Can Fully Fund Anything

What if I told you that everything we have been taught about US economics is wrong? Before your eyes start to glaze over in anticipation of boring economic jargon, let me acquaint you with 5 simple facts that might just wake you up.

The way money works has changed significantly since 1971

Until 1971, federal spending was limited by the amount of gold it had available (the gold standard). The amount of dollars in the economy could not exceed the amount of gold in our reserves. Now, the dollar is no longer pegged to gold, and the US is monetarily sovereign (meaning the government is the sole issuer of the US dollar) the government can create as many dollars as it needs, up to the value of the countrys human and real resources. This economic concept is referred to as Modern Monetary Theory (MMT). It explains how economics works in any monetarily sovereign nation.

The main reason Americans pay federal taxes is to prop up the value of the dollar. Since we can only pay our taxes in US dollars, that creates a demand for them, which gives them value in the market. Taxes are sometimes also used as lifestyle modifiers, such as imposing taxes on cigarettes but they do not fund anything.

All government programs can be fully funded with only the approval of Congress and the President. Read that again, in case it didnt sink in the first time. The Congress can decide that this year we need another $5 trillion to fund universal health care, convert the US to 100% clean energy, pay for everyones college education, etc. No problem. Once the proposed budget is approved by the President, the Federal Reserve will authorize an additional $5 trillion to be created and spent into the economy. No government program needs to be cut to fund another.

This works because the US government budget is nothing like a household budget. For you and me to buy things, we need to first get US dollars to pay for them, either through work or by some other means. The Federal government does not operate in this manner. As the sole issuer of the currency, it can create as many dollars as they need to pay for teachers, doctors, bridge repairs, renewable energy, etc.

So what is keeping us from funding all the programs that everyday Americans so desperately need? A combination of ignorance and economic Calvinism. You remember Calvin. That fun Renaissance theologian who hated anything that smacked of pleasure or leisure. He believed the accumulation of wealth was a sign of Gods grace and the only way to gain entrance to heaven was through continual hard work. Taking a day off was frowned upon, and anyone who was not bedridden was expected to be performing some form of labor for the greater part of their day. Nice philosophy for the Capitalist business owner, but not so great for the average Joe.

Why is it that the requirement to work is so deeply ingrained in our culture? We tend to view the jobless as lazy and unmotivated. Do we ever consider that maybe there are no available jobs to match their talents? Or that there are 500 other people competing for the same job? Why should people have to work in some soulless minimum-wage job just to keep a roof over their head and food on the table?

The excuse Well, I worked hard for my money, why should they get something for nothing? doesnt apply in many cases, particularly in the case of the ultra-rich. They tend not to work for their money certainly not for the millions they accrue on a daily basis. They take the money they have, invest it in something, or just put it in the bank, and their investments earn interest. They didnt lift a finger to work for that interest. It just accrued in their bank account. Somehow thats ok for them, while a single mom barely making surviving working a minimum wage job who needs public assistance to feed her kids is somehow mooching off the system. Do you see how there is something wrong here?

With increasing automation, many jobs will be gone in the next few years. Why should we struggle to create work for the sake of work when everyone can enjoy more hours of leisure or time with their family? The idea that someone somewhere is getting something for nothing enrages some people. Yet do we think a child receiving a mothers care is getting something for nothing? When we enjoy the feel the sun on our face, do we have to pay for that? There are countless instances of enjoying things that we do not pay for.

Although work should not be necessary in order to live, I suspect that most people want to do something productive with their lives. Everyone needs a sense of purpose, whether that is caring for a child or researching cures for cancer. There are few people who would just sit on the sofa all day watching reality TV. And what if they did? Would that be so terrible if you were assured you would have everything you and your family needed? And remember, your tax dollars are not used to fund anything, including government assistance programs. You are not paying for someone elses rent or food.

If the government instituted a Federal Job Guarantee, for example, those willing and able to work would be paid to do whatever job is right for them, whether thats planting trees, performing medical research, or caring for their family. The rest, such as the elderly, children, infirm, etc. would receive a guaranteed basic income.

Weve got to get past the idea that people have to suffer in some way to earn their right to live on the planet. We now have the technology to manage the earths resources for the benefit of the entire population. The only thing standing in the way is greed and the belief that some people deserve more than others.

Imagine: the government decides to fund universal health care, pays for higher education to train the workers needed to sustain the economy, and institutes a Jobs Guarantee/Basic Income. People would not be burdened by health care or college education costs, while being trained in their field of choice to produce goods and services to meet everyones needs while not having to worry about basic food and shelter. This is all easily achievable with simply the approval of Congress and the President.

No, it will not cause runaway inflation. Only when there is full employment would inflation be a problem, and at that point the government can control it by adjusting interest and tax rates. As it stands right now, we are still nowhere near full employment.

We must educate ourselves and our congresspeople about MMT, and demand they fund thee essential programs that will provide income to the people, rather than the current system that funnels all profits to the people who need it least.

For more information on MMT, check out Ellis Winninghams website and follow the Real Progressives Facebook page for videos and livestreams that help explain modern economics so you can see for yourself what America is capable of achieving.