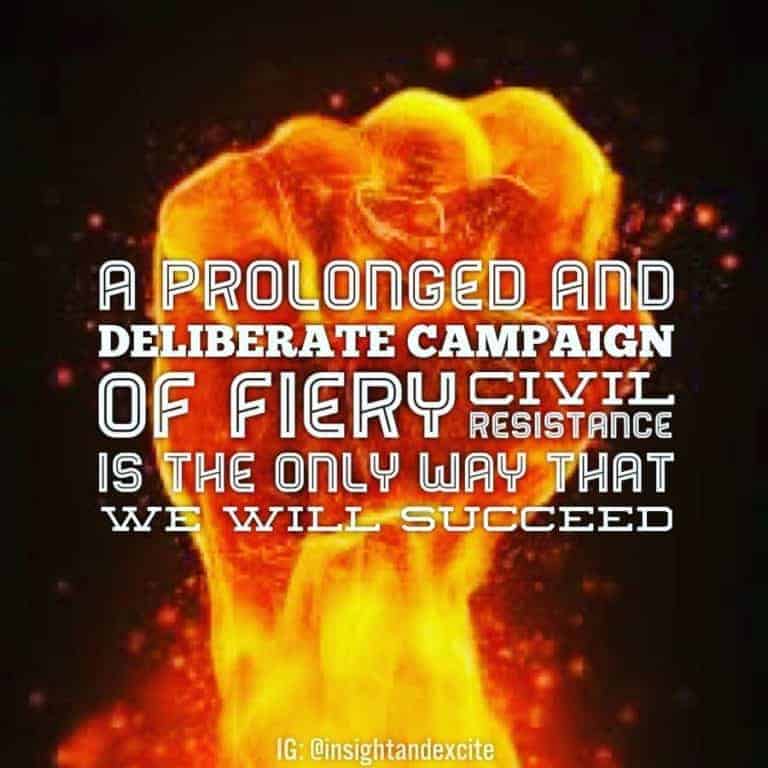 ” The Left stands agape at the precipice of the Trump presidency; a long and excruciating rollercoaster climb through the first couple of weeks of bad decision after bad decision, waiting for the horrifying freefall when the shit hits the fan. We had felt the emergence of Bernie Sanders signaled the beginning of a great movement to fight for the people but instead have been given the least qualified person in history for the most powerful job in the world who is beholden only to himself, his circle of Bond-esque cronies, and the corporate interests that serve the wealthy and no one else. It is incredibly disheartening and can feel overwhelming. What are we supposed to do? How can we reverse this? How can we turn the tides?

While the path will be long and arduous, the reactions to the administration so far give hope that this can be used to build a real movement. There is little that can be done in the halls of Washington DC unless the DNC rejects the corporatist path wholesale, and becomes a revolutionary party interested in helping everyone, and not just giving lip service to doing so while ceding ground left and right to the moneyed interests in order to not offend donors. Since that is highly unlikely, albeit faster than trying to upend election laws across the nation to allow for a truly Left party to emerge, the majority of the progress at this time will have to be done in a grassroots manner. We the people will have to organize in a large enough way, like in Standing Rock, to gain recognition of our demands and a platform to espouse our beliefs. The question that seems to be most pertinent then is how to do so. How do we get our voices heard if the powers that be have no intention of listening unless forced to?

After the election there were several days of protest in the streets all over the country, from sea to shining sea, and the scale of these protests forced the media to take notice and report. As such, the first step that we should take is to establish a continual protest. Not necessarily daily, because we all obviously have lives to live and bills to pay, but a weekly mass protest. Perhaps on Saturdays or Sundays, in as many cities as can be organized, the people should take to the streets to express our dissatisfaction with the new direction of the country.

It cannot be bound to a single cause except in that we do not want the country we love to be decimated by the ignorance and policies we see the Republican-controlled Congress and Trump are enacting on behalf of those who want for nothing except more power. It must be inclusive, supportive, and open. We cannot splinter and bicker over semantics and technicalities when there is a bigger adversary for us to face. Individual causes will be welcome to be represented within the weekly protest, to draw attention to what they feel most passionately about, but the overlaying purpose will be to give a voice to everyone who understands that people should matter more than property and we will no longer be collectively silent in our demands that the direction of this country changes. The majority of people understood that progress was being made even if slowly, but the new administration means going backwards.

To support this effort an organization may need to be formed to coordinate. It will not and cannot run each individual protest in order to avoid allowing an easy target for the Right; it will exist only to promote the protests and try to bring people together. If we can continually grow these protests and create enough of a presence in the eyes and minds of the people, then we can establish a base to really push for the change that is needed to create a country that works for the people and not for money. Without the continual acts of protest and resistance, the masses will lose interest and the horrible policies of the Right will become commonplace and accepted, and the common person will stop paying attention.

One hurdle that will need to be overcome is protest fatigue. A continually heightened sense of outrage and repetitive action can be exhausting. This is why we need to build a base as quickly as possible in order to ensure that when someone needs a break there will be others to take their place. And breaks will be needed. There is no doubt about that. Prolonged protests are high stress and prolonged stress can be traumatic. If one starts protesting and resisting continuously and they feel the weariness setting in it will be important for those who are around them to speak up if they aren’t taking care to rest and insist on it. As such the answer is to build communities of resistance.

The hope is that establishing a sense of community around the protests and building connections will help in a myriad of ways. First and foremost is the obvious growth of the movement itself, but beyond that we can help each other in two other very important and strategic ways. One is that they can help spread the word and get people out. If you have a group of friends new and old that are all in this together, then when word of a protest goes out you can inform each other and plan to go together. In addition to this, the community can support each other. As noted protest fatigue will be a very real thing, so having a group that can support each other and help when someone is getting burnt out will make sure that the movement isn’t losing anyone along the way.

Another possible way to help the resistance and the protests will be for the aforementioned organization, or perhaps a completely different one, to provide assistance to the protestors. By assistance I do not mean the ridiculous idea of paying people to protest, because we need people who are actually in this to express their values and not because someone gave them a check to show up. Rather by assistance I mean that this organization can help to coordinate things like food and water for protestors, warm clothes or blankets in the cold months of the year for those who may have not layered enough for the weather, shelter for longer protests like the one in Standing Rock. An organization such as this would be able to help sustain the movement, and provide an outlet for those with the monetary means to support the resistance but cannot for whatever reason actually get out in the streets.

If we can create a media visible movement that does not end, we can shift the political tectonic plates of the US. The DNC has largely ignored the Left because we have been fundamentally silent and complicit in their governing. No more. They will either listen, or they will be replaced, and Trump will see that he is not a representative for the people. This is not a matter of if, but a matter of when. It is time for those who believe in having a society that is of the people, by the people, and for the people to stand up and be heard.