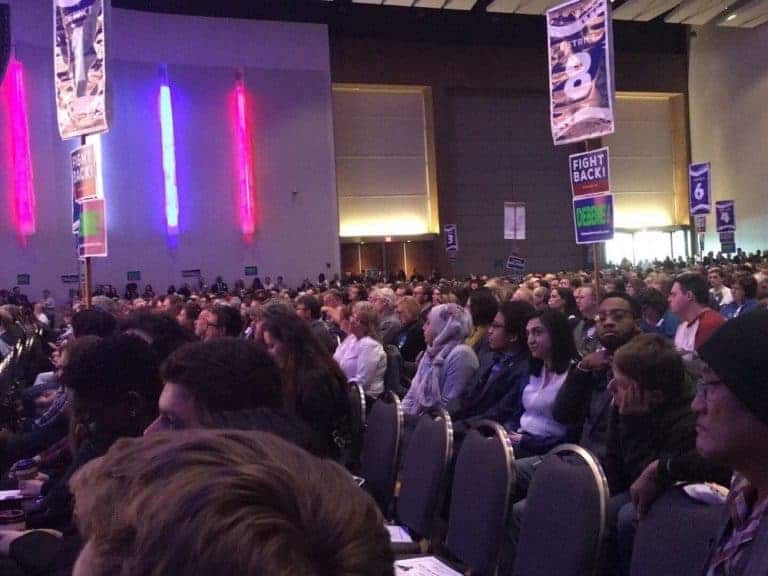 We Progressives won big in Michigan!

And I am already being “trolled” by so-called progressives, that want nothing more than to create chaos for the Dems, like Donald Trump does for the GOP.

I won a State Central Committee Delegate position in the 13th District. And I won an Executive Board seat on the MDP Black Caucus. We ran a slate called The New Black Progressives: The Game Changers. They never saw us coming!

But, I guess some progressives think that if a Berner is “in the game” they are now all of a sudden “the enemy””—”which is sad. This “purist” movement has nothing to do with what Bernie’s ACTUAL vision is.

I am an advisory committee member of Michigan To Believe In:

Michigan to Believe In
We’re an action-oriented coalition of grassroots activists who are working inside and alongside the Democratic Party to…www.michigantobelievein.com

and our goal is to work towards the vision Bernie campaigned on. We partnered with Labor to Win on 2/11/17 in our congressional districts, like they did in CA.

Bernie said, BOTTOM ON UP change; and people are still obsessed with the Democratic National Committee (DNC), like they actually sit on that committee. Well, where do you think 208 people of the 447 DNC members come from? They are voted onto the DNC by people like me, that just won seats on our State Central Committee and other progressives that won as Chairs of our Districts.

Our State Central Committee now has more Berners as delegates, than ever before. And that is now a bad thing? Wow. Maybe you need to rethink YOUR strategy if you need to hate on the wins we had in our state party.

I am looking forward to working with my Bernie family, who have won seats inside the party”—”at every level. To me that is WINNING. We went through the most contentious primary together, we worked on the platform, Rules and Credentials Committees together, we went to the National Convention together, and we are standing tall today and ready to keep fighting for Bernie’s vision.

About that State Chair:

Berners like me actually nominated Brandon Dillon to be our Chair, again (pictured: Michelle Regalado Deatrick, Lena Thompson (me), David Benac and Darrin Camilleri). For me, my decision was based on talking to other active Berners, that have actually talked to and worked with Brandon Dillon, since the National Convention. They worked with him, through this horrendous election season and have come away with a sense that he IS listening and that was good enough for me.

You know, all those pictures floating around on social media and used in articles, to show how angry we Berniecrats were at the National Convention, the folks with blue tape on their mouths…that’s the Michigan Delegation. Our delegates were allowed to DISSENT at the Democratic National Convention in Philly, while other state delegates were being de-credentialed and thrown out. Huge contrast. And something those of us that are actually participating, instead of pontificating, witnessed. Brandon Dillon allowed that to happen, because he was the Chair of the Michigan Delegation.

Yeah, he ended up voting for Hillary, as a super delegate; but he remained neutral, until he cast that vote in Philly, unlike some other SDs. I got nothing to say about that vote he cast, other than the fact that ALL the SDs need to live with what they did, as they watch fellow Americans being terrorized by a crazy pathological Cheetolini.

But, I want an apology!

Many Berners went to Convention thinking they were going to get a chance to litigate the Primary, and a chance to punish the Super Delegates that voted for Hillary.

My suggestion: find the proper forum and take your grievance there. The MDP Spring State Convention was not it”—”unless you proposed a RESOLUTION in which the MDP resolutions committee approved, to be voted on at Convention.

There could have been a Resolution to acknowledge some sort of apology and we ALL would have to vote on it. However: THAT was not done. And I doubt the Resolutions Committee would have approved of such a thing. But, the process for something like this, is there.

Let’s say you wanted a Resolution to address your anger at the Democratic Party. Here is an EXAMPLE:

Whereas, the primary election was stolen from Bernie;

Whereas, the super delegates cast their votes against the outcome of the election;

Whereas, the chair of the DNC (DWS) placed her thumb on the scale for Hillary;

Let it be resolved, that the MDP apologizes to all Berniecrats for cheating us out of the best presidential candidate in recent history.

Anyone could have submitted that Resolution in your County or District convention in January, for the Resolution Committee to consider. IF it passed muster (based on the resolutions committee members, that were voted on from around the state), we would have voted on that Resolution as a complete body of the MDP. But that did not happen. And I doubt it would have happened.

So now, it’s time to move on. You had your chance. We have a new party now.

But I want to burn it down and I hate the Rules!

Well, the change is occurring right in front of you and all around you. People have stepped up and gotten involved. Bottom on up change. Exactly what Bernie said to do. Now, we work with the new team we have elected.

But what I hear instead, is that the Berners that actually stepped up and decided to continue the work with the people we had in power before the election, are now considered “the establishment”. We won seats inside the decision making body of the party. And we are now being called, “the establishment.” Wow. Talk about circular logic.

And the rules…don’t even get me started on the rules. The MDP uses the Roberts Rules of Order. I am no expert, but I did at least watch a Youtube Video the night before convention, to get a basic understanding about what the Rules are and why they are used. Did you know the Rules are actually designed to allow the MEMBERS to have control, not the Chair? But if you are yelling out foolishness and not being recognized by the chair and have no properly formed Motion to vote on, NOTHING GETS DONE!

Our CD was so out of order: folks were screaming at the Chair without being recognized. It was so bad, that the chaplain in our CD, called out folks by name in the opening prayer and said “bless those, even the disrespectful.”

Don’t get me wrong,

We need to celebrate our victories. If you can’t be happy for the progressives that won, then you really don’t support progressives.

While we don’t have the final tallies (some CDs haven’t reported final results, and 3/14 have contested results), here are some major highlights:

Progressives from the statewide group Michigan To Believe In won:

The Progressive Unity slate, which was a coalition slate of progressives from Michigan to Believe In working with Labor, won the vast majority of seats on the State Central Committee and in Congressional District Leadership

SO I will say it again….

Today is a new day, for the Michigan Democratic Party.