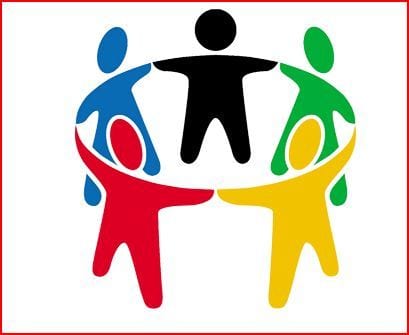 As we’ve seen with the rebranding of racists and Neo-Nazis as the Alt-Right, there is still plenty of racism and discrimination left in this country. We, as both minorities and allied whites, have nibbled around the edges of this conflict for hundreds of years. Since I am a black man myself, I am privy to how damaging racism is on a personal level. At the same time, I can recognize that racism is only a method of division that works to enslave the majority of the populace. It’s time we recognize the real problem (economics) and work together to solve it by implementing strategies using the knowledge of economic reality (MMT).

As seen in this article by Jonna Ivin, poor whites have been pitted against minorities for almost as long as this country has existed. In fact, the trick of dividing minorities from the poor majority has existed way before the idea of the United States of America was ever even thought of. By using one faction against another, the powers-that-be of this country and others before us have been able to distract the masses from their rape of real resources from the rest of the population.

Minorities too have been duped by this narrative. By focusing only on the transgressions of the poor majority, they have overlooked the bigger picture. While the suffering inflicted by poor and working class majorities has hurt, it does not compare to the institutionalized racism and economic destruction that the powers-that-be have created that has thoroughly destroyed many minority communities, especially those in the inner city.

In order to change the dire economic conditions of all poor and to lessen the oppression of racism on minorities, we must make drastic changes to how the economy functions for the 99%. Creating solutions based on the power of the federal government to spend money into existence, makes the arguments about who needs to be taxed to fund those programs moot. Understanding how each solution helps to eliminate the strata, artificially imposed on the population by those who benefit from the divisiveness of racism, will open our eyes to new horizons. By understanding how the economy actually works, we can then pressure politicians or vote in new politicians who are ready to serve the public purpose. This will allow the economy to become much stronger at the bottom than ever, making it much harder for the powers-that-be to use their bait-and-switch games to distract us from pulling up the 99% from the dredges of Neoliberalism. Without the ability to use identity politics and false narratives to distract whites and minorities from working together for the common good, it makes it possible for all in the 99% to respect each other and cultures. Some of the programs that can work for us all and reduce discrimination include universal healthcare, a jobs guarantee, free higher education, and green energy & environmental protections.

Progressives already know that obtaining universal healthcare (not insurance) is a very important cause that will help all, but there are other programs that can be implemented that will lessen the burden of the less fortunate. By making sure all Americans have healthcare, this would eliminate the need for Medicaid. As we have seen, Medicaid has been used as a wedge issue to justify reduced spending on the healthcare of everyone, not just minorities. Removing this stumbling block will make it easier to unite disparate groups of Americans.

A jobs guarantee coupled with a basic income can also be used as a tool to lessen the differences amongst minorities and whites. By making a job available to all able-bodied Americans, this would destroy the notion that minorities of any group are lazy, based on statistics that are cherry-picked to begin with. Also, a basic income for those unable to work would allow the disabled and elderly to live their lives in dignity, allowing whites from those groups to not look towards minorities with hate for ‘stealing’ money that could be earmarked to improve their lives.

Free college and trade school education will also destroy boundaries between the majority and minorities. By allowing all students with the desire and ability to continue their education beyond high school, this would allow people from different ethnic groups and ways of life to interact in places of higher education, breaking down the walls of confusion and separation. Also, by allowing everyone a true and honest chance of bettering themselves, it will allow us to educate the populace for the changes of the 21st century. Programs mentioned in the last 2 paragraphs would make identity-based programs such as affirmative action obsolete, therefore eliminating another source of division to be eliminated.

Green energy and environmental protections go hand-in-hand to help all Americans. By investing in solar and other forms of renewable energy, we will be able to create jobs that can lift people from all walks of life out of poverty. Also, by working to keep our environment free of pollution, we make sure that there are homes and leisure areas safe for all Americans.

While this is not an easy process, it is a necessary one for us to mend the wounds that racism and other forms of discrimination have caused since America has existed. Unlocking the potential of the economy for ALL of the populace makes it much more difficult to divide us. Once we can all have a true chance to succeed, the scourge of discrimination can be reduced and all Americans can prosper!