In October of 2016, soon after the Wikileak entitled “The Podesta Emails” was released, in the middle of pages and pages of controversy about Hillary Clinton and the Clinton Foundation, it was reported that Obama’s cabinet was almost entirely hand picked by the 1%, and presented by Michael Froman, who at that time was an executive at Citibank.It was regarded by many to be the major unsung bombshell from the whole leak, and with good reason; it shows that the corporate elite were entitled to make these kinds of decisions, which would affect every citizen of the US. It also showed the secrecy with which all of these decisions were made, in ‘smoky back rooms’, far from the prying eyes of those who might object to what was really going on.
The big bombshell was accompanied by a smaller bombshell, and that was the timing: Froman was dropping lists of ‘suggestions’ for Obama’s cabinet at least a month before the November election, even stating that there had been earlier versions of the lists.

But those who are prone to defend Froman, saying the lists were mere ‘suggestions’ that just happened to have manifested in reality almost exactly, are also quick to point out that he stated: “While you did not ask for this, I prepared and attached a similar document on women.” …Which strongly implies that he WAS asked to produce the first list. But the question is this: WHY is an executive for a bank that profited so handsomely from the bailouts, being asked for personnel advice by the not-even-yet-official-Obama administration in the first place? Was this just considered ‘standard procedure’ in 2008?

Particularly telling perhaps, was Froman’s assurance that the lists would “continue to grow“.

Not only were they intended to grow to cover more positions within the executive branch of our government at the time (the brand new Obama administration), but these lists grew to actually cover positions outside of the executive branch, into the other branches of the government, IE independent, Judicial and Legislative branches responsible for law enforcement, lawmaking, and oversight of the other branches of our government. The problem with that is that our government is basically held together by a system of checks and balances, which maintains the balance of power between each of its branches. 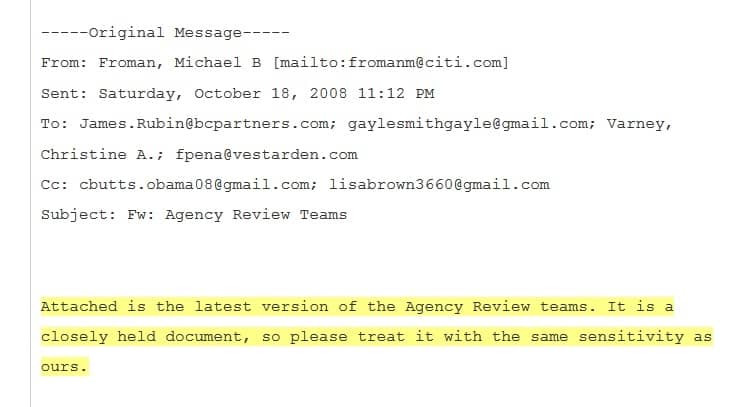 They planned to do this by hand-selecting agency review teams, which would transition the various agencies into the new administration. The question was posed in response to an earlier email entitled “Agency Review Teams”, which Michael Froman of Citibank received from Lisa Brown, of the law firm of Hussain and Haider, and then forwarded to several people, one of which was Christine Varney of the DoJ, who responded:

The “separation of powers issue” she’s referring to, is the exact same as the “checks and balances” issue referred to earlier, and it isn’t “arguable”. It’s what’s supposed to keep our government together. Just him contacting her about this raises the issue of treason.

Imagine, not only having planted operatives that will do your bidding, almost totally comprising the President’s cabinet, but also in the agencies which are designed to keep you in check. One step is an insurrection, one more step is a cabal. It doesn’t take much to understand the implications of this, and even the potential illegality of it.

And Michael Froman acts as a voice of reason in this. While the last revelations on the subject put Froman into the spotlight as a major perpetrator, this set of emails paints him more as a reserved harbinger of doom. He doesn’t want to “do what’s right”, he wants to “not get caught”.

Naturally, there were others with reservations. Here is Todd Stern’s response to the email.

What’s interesting to note in that, is how patently obvious the struggle is, as they try to square what’s really going on, with the image they’re trying to paint. You can almost feel sorry for them. …Almost. Also interesting to note, though Stern has a strong connection with the US government (as did Podesta and Froman), and seems to be speaking in a government capacity here, at the time of this email exchange, he was working at Wilmer Cutler Pickering Hale and Dorr LLP. The line between ‘public’ and ‘private’ seems to have been blurred, even then.

Just to clarify, what we’re talking about here, is the elite of the Democratic Party, together with the elite from Wall St., hand-picking individuals not only for the Democratic party cabinet, within the Executive branch, but for regulatory agencies within the other branches of our government, and independent agencies as well. They planned to ultimately fill those agencies with planted heads. That was clearly their intention.

And to hear them talk about it, this was always an option on the table going back at least to the beginning of Clinton’s term.

This is a complex situation, without a doubt. And while it may be true that a lot of what is being talked about is an interim government, or ‘temporary’ government set up for the transition from one administration to the next, this ‘transition’ was guided by corporate elite. Notice in that message, there is a file attached. These notes are sent as a response, from Harrison Wellford, CEO of Wellford Energy, who advises caution when saying things that might imply that review team members might find permanent positions within agencies because they want to “downplay that”.

He also advises caution when saying that the interim teams would be more powerful, and last longer than usual. They are meant to do their job and get out.

But, even if the teams are temporary… WHY is the CEO of Wellford Energy involved in the process in the first place, let alone in a position of such influence? Why is he sending that attachment to Lisa Brown?

Just to further clarify, as this is a lot to process at once, this list was compiled from “multiple sources“, given by Lisa Brown of Hussain and Haider to Michael Froman of Citibank, then forwarded by him to multiple people, including Christine Varney of the DoJ, who then forwards the email to John Podesta. That is the only reason why we are talking about this. At some point before reaching Podesta, the attachment from the message was unfortunately lost, because what we have reached him does not include it.

However, we have tantalizing evidence that remains, including five agencies (four independent, one judicial), and two names:

One can easily see how the 1% and the DNC establishment might want to have their fingers in all of those pies, particularly in light of their activities during the last 8 years.

And two names are left for us to consider; Bill Baer, and Phil Weiser.

Christine Varney had this to say: 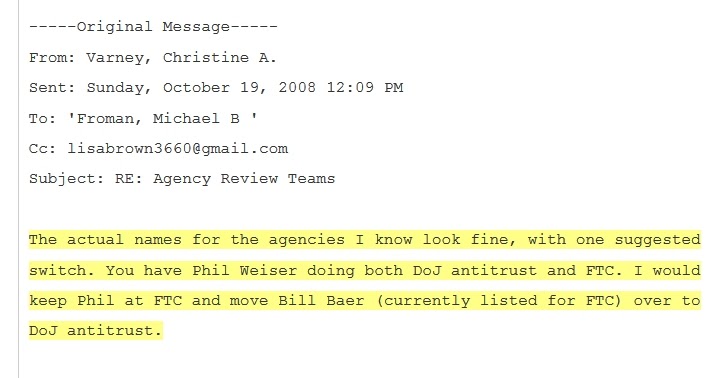 So many ‘suggestions’. Who knew picking our government was such a group effort!

But were her suggestions heeded?

Yes, and no. They decided to keep Bill Baer on DoJ Antitrust, but Phil Weiser was put on both. There’s simply no telling what other names were on that full list, but so far they are 2 for 2. Phil Weiser also was lead agency reviewer for the Federal Trade Commission as part of the 2008 Presidential Transition.

Keep in mind, these were merely interim teams. They weren’t ‘supposed’ to produce heads of agencies. But even if they didn’t actually wind up doing EXACTLY what they conspired to do, and then worried about getting caught for, the fact remains that a fairly substantial group of people is implicated in their attempts to do it. But the fact is, they DID do it.

With all this work to compile the best team to represent corporate America, one must wonder if it was all worth it, when it was all said and done, and we now can know what they were up to.

The Democratic party, clearly thought their relationship in everything would empower them against their Republican rivals, and no doubt the promise of this is what involved them in the first place. It’s also why they accused Bernie Sanders of leading his followers astray. They knew who was really behind everything, and who really made the major decisions in our government.

There are strong indications that what we’re looking at, in these emails from 2008, is evidence of a transition government on two levels. On one level, it’s a transition from a Republican administration to a Democratic one, but on another level, it’s transitioning from Democracy to Oligarchy.

It’s easy to suspect that the transition is much further along, 8 years later.

It’s also easy to suspect that the Democratic party was simply used for a larger purpose: to infiltrate major positions in our government. Their promises of empowerment were ultimately fruitless for the DNC, but look what the 1% accomplished.