Another Modest Proposal: The Future of Austerity Politics

“I have been assured by a very knowing American of my acquaintance in London, that a young healthy child well nursed is at a year old a most delicious, nourishing, and wholesome food, whether stewed, roasted, baked, or boiled, and I make no doubt that it will equally serve in a fricassee, or a ragout.” (A Modest Proposal, Jonathan Swift, 1729)

Although we have solved many modern problems in our society, there are countless more that seem to elude us. Millions are still without work, and those with work often do not earn a living wage and don’t have adequate medical coverage. Many of us are homeless, forced to live with relatives, or incurring ever larger debts to survive. The problems facing struggling Americans need an answer, but there seems to be no solution in sight. Politicians preach over and over that they will provide more jobs and change the economic tide of wealth towards the poor and middle class, yet it never happens. Political promise-breaking is almost as commonplace as poverty itself. More jobs are lost every year, public programs still lack funding and our environment continues to tread to an inevitable breaking point.

In 1729, Jonathan Swift wrote his satirical essay, A Modest Proposal, and it brought a solution forward (albeit outrageous) to help with a similar problem occurring in Britain at the time. As I was contemplating the current issues facing our country I had a revelation: Swift had it right all along! We can implement his ideas to help stop world hunger, lower the unemployment rate by creating jobs, put more money into the economy and possibly even strike fear into our enemies! What could this solution be, you ask? It’s turning the children of the poor into food for the rich. How else will they be of use to our country, if not for being the next “other white meat”? The system would finally treat the poor as the creators of a supply that is demanded by the rich. The debtors would be given incentives to treat their debtees fairly and the poor would finally earn their keep. It’s a delicious win-win right? I can see the billboards now: 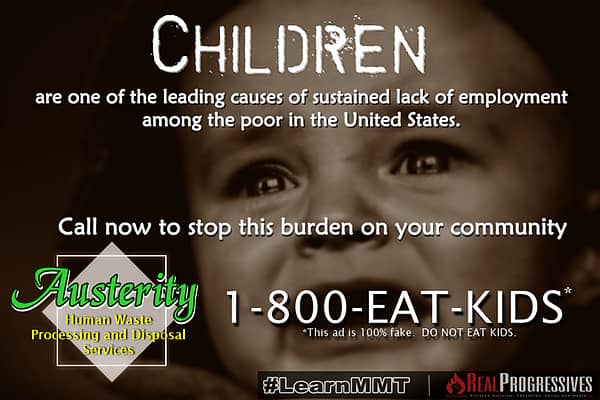 (Of course, this is also satire. I am not suggesting anyone eat anyone else, or their children.)

Swift’s essay is filled with blunt statements on the benefits and how such an absurd solution could be implemented in everyday society. His hypothetical proposal showed the reality of the harsh conditions of the poor. It also brought to light how the elitist classes were trivializing the worthiness of the layman’s plight. In the face of such horrific storytelling, the British government had little choice but to enact social reforms in an effort to hold the aristocracy responsible for their abysmal treatment of the lower classes, putting more programs in place to prevent the poor from falling through the cracks.

Now, of course, nothing is perfect, and we still have a long way to go before the 99% are on an even playing field with the ultra elite. A Modest Proposal and it’s dark analogies still have relevance today. The US Congress and other legislative bodies are giving little thought to investing in real resources, like education, job training, and infrastructure. They cry out about the terrifying “National Debt” as if it’s any more than a fantasy in our modern economy. The reality is, the national debt is just a number in a ledger that has no bearing on whether or not our country can remain solvent (learn MMT). The worst part of these debt fears, however, are the spending cuts imposed which limit the amount of real resources that we could be utilizing to build an economy that benefits everyone.

Congress holds the power over the Federal Reserve as well as the ability to completely fund the needs of the public. Instead of spending for the public purpose, however, our elected representatives have focused their efforts on distracting us with more fear and insignificant matters like the President’s tweets or some unnecessary government shutdown. The fact that programs which benefit the poor and middle class are not getting federal funding is entirely the fault of our federal government. When there is a public demand, the government is supposed to supply. Their purpose is to provide for the needs of their citizens.

We are the ones who help add value to our economy and country as a whole. Our apathy and acceptance of the federal government’s austerity measures is an agreement for more of the same. It’s as if we are pawns in some evil game of Parcheesi, and the spoils are the chance to waste even more of our time with lies, degrade more of our resources, all while somehow maintaining public confidence because we refuse to pay attention. We’re focusing on what’s trending while accepting that things are not OK. Bad has become the new normal. Even mass shootings of children and instances of our government poisoning public water and lands are shrugged off as some macabre occupational hazard of living in “the land of the free.” Those of us that are looking ahead with open eyes, preparing our minds to handle another disheartening election cycle, realize none of it really matters if we aren’t prepared to care about one another or hold those in power accountable to the will of the people. 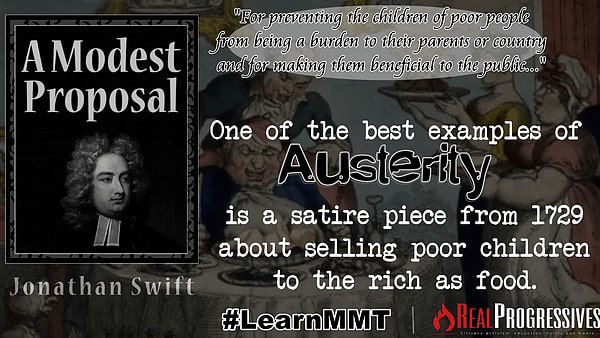 In Swift’s time, the public needed to be shocked to their core. Maybe a damning, revolutionary piece like A Modest Proposal needs to come to fruition in our time to force an apathetic public’s eyes open to the truth. Those who see clearly are aware that not everything is as cut and dry as impeaching Trump or going to war with whoever because ‘Murica. Not everyone has a part in why we are where we are, but everyone has a part in how this plays out. It’s not about who voted for which president, it’s about what your values are and supporting who promotes them and is willing to fight for them, no matter who they are or what anyone else says. It’s about finding your truth and not settling for anything less. If you want a revolution, speak that truth to power.