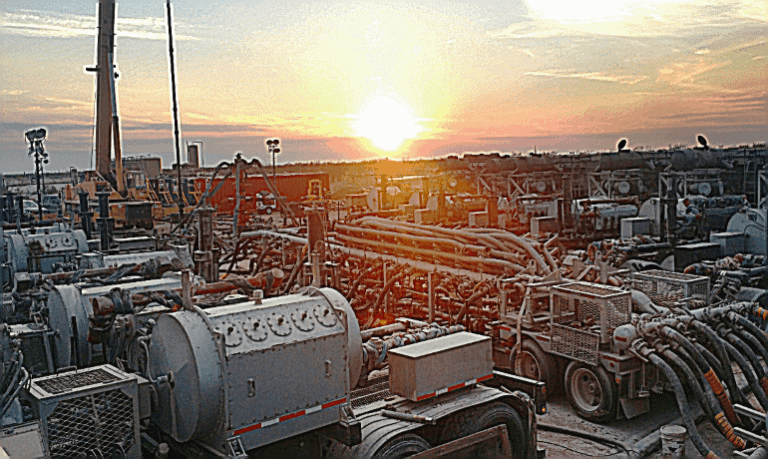 The Environmental Impacts of Fracking in the United States

Fracking is completely safe, right? Our oil and gas companies, the media, and even the government agencies designated to protect us have led us to believe the process is safe. But is it?

This very controversial practice of injecting water, sand, and other chemical materials into fissures of shale formations, found in the earth’s crust to extract natural gas has been known to pollute air quality, cause earthquakes, contaminate water, and create sinkholes.

So is it safe?

The Definition of Fracking

Hydraulic fracturing, or as it is often called, “fracking,” is the process of extracting natural gas and oil from shale rock formations beneath the earth’s surface. There aren’t many individuals who actually understand the process of fracking and what it entails. To sum it up, only one surface well has to be built in order to tap the gas trapped over hundreds of acres of land. Therefore, the area needed to build this one surface well is only about 5 acres but the area impacted is hundreds of acres. Since the drilling is happening far beneath the earth’s surface and under homeowners properties, property/homeowners do not have to be notified and often do not even realize what is happening far below them.

The drilling that occurs is first vertical until it hits the shale formation. It then becomes horizontal drilling. Drilling often occurs in several directions (often described like the spokes on a wheel). At this point, the well is encased with steel and cement, which is meant to keep gas and frack water from leaking out. Explosives are then used along the steel casing to make holes to allow for the gas to flow up to the vertical sections of the well. At this point, a mixture of chemicals, sand, and water are forced deep into the earth to create cracks and fissures in the shale rock, allowing the natural gas to flow through to the surface (http://stateimpact.npr.org/pennsylvania/tag/fracking/).

It has been proven that the fracking process causes earthquakes. Over the last few years, formerly geologically stable regions of the United States including portions of Alabama, Arkansas, Colorado, Kansas, New Mexico, Ohio, Oklahoma, and Texas, have experienced movements in faults that haven’t moved in millions of years. These are very ancient fault lines and fracking is causing them to slip. It is reported, that fracking is likely the cause of the six-fold rise in seismic activity between 2000 and 2011 (http://naturalsociety.com/fracking-linked-tremors-sinkholes-media-wants-admit/). In Oklahoma, there were 585 earthquakes in 2014 alone, more than in the last 35 years combined (https://www.alternet.org/environment/8-dangerous-side-effects-fracking-industry-doesnt-want-you-hear-about). When fracking was at its most prevalent earthquakes were a daily occurrence in Oklahoma, but there were three in 2011 that were bigger than the rest. One was a magnitude 5.6, the largest in Oklahoma’s recorded history. It damaged a part of St. Gregory’s University and it severely damaged 14 homes. This is a place where nobody carries earthquake insurance, so who compensates them? Particularly when they know fracking causes earthquakes. None of the victims have received compensation.

Lesser known, and much lesser reported is fracking’s link to massive sinkholes. These sinkholes often “appear overnight and leak radiation across the nation” (http://naturalsociety.com/fracking-linked-tremors-sinkholes-media-wants-admit/). There have been no mainstream media outlets investigating or reporting on the connection of fracking, drilling, and mining to these massive sinkholes. Massive sinkholes are swallowing up entire forests and swamps, but have also displaced many people. On top of this, the areas where the sinkholes occur are often highly contaminated and very flammable. Often, nothing is done for the displaced individuals who are the victims of sinkholes.

According to a study done by Environmental America fracking causes 450,000 tons of air pollution per year. The primary air emissions are methane emissions from well and compressor stations. In one recent study, it was found that at the very least 30% to perhaps 100% of the methane from shale gas production escapes into the atmosphere because of fracking than from conventional gas production. This methane gradually breaks down in the atmosphere forming carbon dioxide. This means at our current pace our greenhouse-gas footprint from fracking will exceed that of coal and oil in 50 years-time (https://www.sourcewatch.org/index.php/Environmental_impacts_of_fracking). Others have criticized this study as flawed stating it does not take into consideration green technologies and it over-estimates the fugitive emissions.

Testing near drilling sites is often testing above national air quality standards. In one area in Texas, there were “elevated levels of disulfides, benzenes, xylenes, and naphthalene detected in the air, emitted from compressor stations” (https://www.sourcewatch.org/index.php/Environmental_impacts_of_fracking). It is often common for people living near these places to complain of nosebleeds, dizziness, headaches, diarrhea, muscle spasms, blackouts, and multiple other health issues. The same types of issues have been reported around areas where there are high concentrations of drilling rigs and around drilling sites.

According to a study done by Environment America, 280 billion gallons of toxic wastewater was generated by Fracking in 2012 alone. Where does this waste water go? According to the oil and gas companies it is properly disposed of (within the earth). 72 trillion gallons of water are needed to run current gas wells. 90 percent of the water used in fracking never returns to the surface (due to the fact that it is contaminated) and is permanently REMOVED from the water cycle (https://www.alternet.org/environment/8-dangerous-side-effects-fracking-industry-doesnt-want-you-hear-about). It seems that investigations by the Environmental Protection Agency on Fracking’s potential harm on drinking water have been narrowed in scope for many years and negative findings have been removed due to industry and government pressure (http://www.sourcewatch.org/index.php/Environmental_impacts_of_fracking). In cases where it is believed that water has been contaminated or individual well water has been degraded due to fracking in the area, the EPA states it has no power to regulate in cases where fracking is involved, such has been prevalent in the state of Pennsylvania. This is due to an exemption put in place in 2004 by Vice-President Dick Cheney, Former CEO of Halliburton, an oilfield services company that pioneered the use of Fracking. Cheney was in charge of the energy policy for the white house, which has prompted critics to call this provision the “Halliburton Loophole” (https://www.huffingtingtonpost.com/entry/pensylvania-fracking-water_us576b76e4b0c0252e786d5e). More recently there have been elevated levels of iodine-131 found in drinking water and milk in areas near fracking sites (this is a radioactive chemical tracer patented, among others, by Halliburton). Often states are on their own to solve their individual water crises due to fracking. Most don’t have any regulations.

A comprehensive study out of Cornell discusses hydraulic fracturing waste spills occurring or being improperly disposed of (dumped in rivers and ponds) such is often been found to be the case in Colorado, Louisiana, New York, Ohio, Pennsylvania, and Texas. These cases report hundreds of cows dying, as well as stillborn and stunted calves after exposure to the contaminated water. The Industry’s strategic lobbying has resulted in legislation that has allowed the oil/gas companies to keep their chemicals in the hydraulic fracturing secret, which then protects them from being held legally responsible for contamination (http://www.sourcewatch.org/index.php/Environmental_impacts_of_fracking).

Between 2007 and 2016 at least 2,800 water-related complaints have been investigated by the Pennsylvania Department of Environmental Protection’s Oil and Gas Program (these are just the ones reported, and others were settled privately). Many residents have gone months, even year without clean water. The DEP must first prove there is a connection (which often does not happen), then relief is often unsatisfying (endless supplies of bottled water and shrunken property values) and any outcomes are very slow to come (https://www.huffingtingtonpost.com/entry/pensylvania-fracking-water_us576b76e4b0c0252e786d5e). In Pennsylvania, it is not uncommon for private wells to be ruined. Residents will complain of brown, bubbly, sandy or flammable water. The problem is the DEP rarely finds the proof of a connection. Even if the DEP finds chemicals in the homeowner’s water, they do not have a “˜before’ specimen proving the chemicals weren’t there prior to the drilling (which often clears the fracking company).

Fracking took hold in Pennsylvania before the potential health impacts were even considered and the extent of the impacts remain unknown today. The state didn’t actually start to establish protocols for gas related water investigations until 2015. Not surprisingly, the natural gas industry wields considerable power in Pennsylvania. In 2014 and 2015 it contributed $2.7 million to political campaigns in the state and spent about $17.5 million lobbying. It has been cited that the money certainly creates ties between fossil-fuel interests and legislators who are supposed to be creating laws to create cleaner air and water for the people of Pennsylvania. Wells have been found to contain benzene, methane, propane, toluene, aluminum, iron, manganese, di-ethylhexyl phthalate, iodine-131, etc.

In places where fracking is prevalent, we have seen an increase in radon exposure by 39 percent. Radon is a naturally occurring radioactive gas formed by the decay of uranium in rock, soil, and water. It is an odorless, tasteless, and invisible gas that moves through the ground and into the air. It is the second leading cause of lung cancer after smoking. Since drilling began in Pennsylvania the incidence of radon in basements has steadily risen (https://www.alternet.org/environment/8-dangerous-side-effects-fracking-industry-doesnt-want-you-hear-about).

National standards for Safety Regarding Fracking

Who is keeping your family safe? Good question. It seems we typically look to our elected officials to ensure the safety of the people. It seems contributions from fracking companies to congressional candidates of ” state and districts where fracking occurs rose more than 230 percent between the 2004 and 2012 election cycles, from $2.1 million to $6.9 million” (https://www.alternet.org/environment/8-dangerous-side-effects-fracking-industry-doesnt-want-you-hear-about). This completely outpaces contributions from the entire oil and gas industry to all congressional candidates. We can draw one big conclusion from this: The fracking industry holds a big stake in the current laws remaining as they are. Republican congressional candidates received 80 percent of fracking industry contributions made, proving that fracking isn’t just good business for oil companies.

Representative Joe Barton (R) from Texas received the most contributions from the fracking industry at $500,000 between the years of 2004 and 2012. This was $100,000 more than any other candidates. It was Barton who sponsored the Energy Act of 2005, which exempted fracking from federal oversight under the Safe Drinking Water Act (https://www.alternet.org/environment/8-dangerous-side-effects-fracking-industry-doesnt-want-you-hear-about). With no federal oversight, states have created their own non-uniform and often incomplete set of regulations if they have any at all. For example, Illinois requires companies to disclose information about chemicals they use before they drill and monitor groundwater through the process, while Virginia requires no disclosure. Exemption from the Federal Drinking Water Act has allowed the fracking industry to essentially control large aspects of public health and the environment. If fracking were a part of the Federal Drinking Water Act then the Environmental Protection Agency could directly regulate fracking and other aspects of oil and gas production and set sensible safety standards and regulate the chemicals used.

How is it that when we have the technology, the policy tools, and even the economic ability necessary for radical change and action here in the United States to move away from gas and oil, that we aren’t? It is because we essentially lack the political will and backing to do so. We live in a political system where money talks and the corporate voice is much louder than that of the people’s voice. Many here in the United States are in support of a Green New Deal, aimed at reducing America’s carbon emissions as rapidly as possible, this would, however, take away the power and profit from the oil industry.