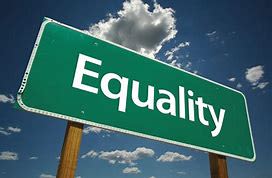 Remember when Martin Luther King Jr. urged the disenfranchised, 15% of the population, to relax and leave their aspirations for equality in the hands of the Democratic party leaders? Remember the speech he gave at Hunter College on Human Rights day? Remember the line, “Let my people go, but only a few at a time because covering all at once is too idealistic and impractical?” Neither does anyone else. It was all or nothing and it was already 178 years overdue.

We all know what followed. Both parties were redefined and realigned as a consequence of King’s direct action. Pushed by King and so many others, like-minded people stepped forward and coalesced around the Democratic party. They transformed a political entity to their purpose and only then were they led by President Lyndon Johnson to implement legislation.

I’d have loved to see Hillary Clinton and Nancy Pelosi standing astride that movement yelling, “Stop” . This is exactly what they are attempting to do with their continued support of Healthcare for profit. It’s called managing expectations. Yes, we have a greater percentage covered under the ACA. It’s a gain. It isn’t equality. It’s effectively hindered progress toward that end. Ten years have passed. Another two to six will pass before we place a mute on the Trumpet. If we elect a Clinton or Pelosi we’ll have another four to eight to add to the total. Because all focus will be directed toward yet another inequitable fix. The issue of healthcare is 50 years past due. Richard Nixon first identified it as a growing problem. Both parties are still kicking the ball. Those stuck in the middle are being carried off the field while the parties continue playing “their” game.

What do you suppose would have happened if the Leaders of the Civil Rights Movement had decided to settle, deciding that parsing out rights was the pragmatic approach? What if they decided to do it state by state? Or given states the ability to opt out under particular circumstances? A slow dribble until finally, everyone had their Constitutional rights secured. They’d have never succeeded. The fail would have been due to the classic “have and have not’ dynamic. No one was running around advocating for an “Octoroon first” or a “High Yellow first” model. The movement would have ended, divided and conquered.

While I applaud the efforts and accomplishment of getting the “least among us” adequate healthcare, the ACA has a gap. Whether by design or an inattention to the lessons of history the gap exists. The consequence of a “healthcare for some” policy has been divisive. That gap has provided a lovely home for an opposition wedge. It’s also left millions of Democratic voters feeling like justice has passed them by, another wedge. You can’t give three of your four children ice cream and expect good results.

Most conversations on Healthcare take shape around economics. Those of us who understand MMT realize this is a distraction, an excuse not to act. The U.S. Constitution reads, “Life, liberty and the pursuit of happiness.” Not, “Life (if you can afford our product) Liberty (as long as your health holds up) and the pursuit of happiness (for those covered under section 15.c).

This is a nation based on the principles of equality and justice. Inequitable solutions won’t work with Healthcare any more than they would have during the Civil Rights movement. There are many well-thought out rationales in defense of the ACA. No one laying in their deathbed is going to be moved by them. Neither will the countless others who have an inability to differentiate between issue and policy. Incrementalism isn’t the solution. It doesn’t matter that you understand the how and why and who to blame for them sitting uncovered in the gap. They sense inequality. The only way to unity is a just healthcare system inclusive to ‘We the People’!