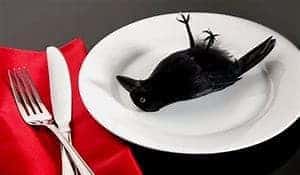 Few people know that turkey was not served at the first Thanksgiving. It was there. It just wasn’t served up on a table. What followed was a bloodbath. More on that later. Why did I not know this? How is it that I, a product of our public school system, did not know what occurred that fateful day at the Alamo? Sure I knew about the buckle people and their long trip in that Plymouth Chrysler. But I obviously didn’t have the whole story. I blame complacency of that era’s mainstream media.

Soon after crossing the Rio Grande, the buckle people decided to live up to their name. They dismantled the Plymouth they had pilgrimed in. Some of the shiny parts were fashioned into buckles. An idea most supported as they believed in recycling and wanted to create jobs.

Early model Plymouths were hand carved from massive blocks of solid iron, With all this iron laying around and buckles being worn a huge meteor was attracted. This rectangularly shaped sky chunk crashed into the earth and landed on a bunch of people. The next thing that happened was that these pilgrims began flying toward the rock and getting stuck to both sides.

All this took place without one lunch break. No one had noticed because they were focused on production. Mitch, leader of those stuck on the right side of the rock, kept telling everyone to get back to work and tighten their buckles. The leader of the left side insisted she was working on lunch but was being obstructed by Mitch. Frankly, I think Nancy just didn’t understand that you don’t open a negotiation with a low ball compromise.

This went back and forth for decades. Meanwhile, the people worked harder and got hungrier and angrier. Fearing they would lose control the two leaders decided to distract the crowd with a holiday, a day off. The pilgrims saw this as progress. Even though none of them remembered Nancy and Mitch saving them by deftly avoiding a head-on collision with an imaginary wall on their way into the country. It was at least a date set. Kicked down the road a bit but something to hope and be thankful for.

As the new non-national holiday approached the focus centered on the menu. The people wanted turkey but they only had one. It belonged to Mitch who decided he wasn’t sharing. Being stuck to the rock, they had no way of knowing that turkeys were being spent into existence in the hills surrounding them. They thought Mitch had greedily hoarded the only one in existence and they wanted it. For a time, he gained some support by appealing to fear and superstition. Arguing that if his turkey was used they would go into a poultry deficit and end up in debtors prison. No way could they eat the turkey until they have an equal replacement. It seemed to make sense. Some even struggled against the forces of buckle and rock to lean toward Mitch’s side.

Nancy saw an opportunity, to not only gain favor but to get rid of the crow perched on her shoulder. She offered it up as a meal solution while playing savior. Truth was she had plenty of crows as an entire murder of them had been circling over her head ever since her healthcare plan flopped. No way one crow would feed them all. She insisted it was better than nothing and promised to work toward a grouse for the following year’s meal, a pheasant for the third, incrementally working their way up to a turkey. Again, a slight shift occurred and many now leaned toward the left.

The people kept toiling away at the buckle factory and hunger increased. All they wanted was a decent meal and all they were getting for sustenance were spoonfuls of rational and reduced calorie promises, no meat! The spell was broken when they were all served Nancy’s paltry portion of crow while watching Mitch’s fat turkey scratching around on his shell. This was not progress, this was a holding pattern.

The volatile situation exploded when Sacagawea showed up and informed everyone that the hills were alive with the sound of turkey. (to this day some believe that “Sacagawea” was actually Elizabeth Warren’s social media handle). As they were literally eating crow, they decided to eat it figuratively too and admitted they’d been duped. At any rate, the left revolted and began hurtling their buckles at the two manipulators. This, of course, released them from the magnetic pull of the Plymouthized Rock and the hypnotic spell of the witch and warlock. Once free, they went out to take advantage of the land’s ability to generate its own Butterballs at will. The right side witnessed these events and cautiously began discarding their labels too and chasing turkeys.

There are many lessons to be learned here, The space rock slipping past their defense, the lack of a Dept. of Labor, a flawed healthcare bill, the lapse of media, the unsolved mystery of Elizabeth Warren, the fact that my education has me thinking the Alamo was somehow connected to the Pilgrims. All are a result of Nancy and Mitch running around with scissors in their hands like a couple of toddlers cutting everything in sight to justify not meeting basic needs.

Another lesson is that Nancy and Mitch have long exceeded their expiration date for use at any Thanksgiving Dinner.