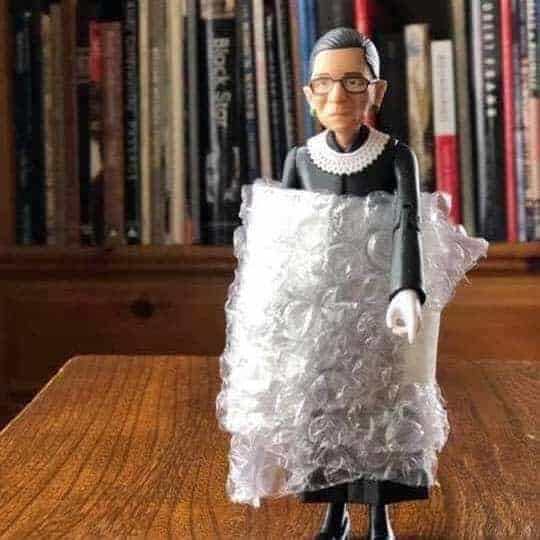 The Abuse of Ruth

The Abuse of Ruth

If nothing else, Supreme Court Justice Ruth Bader Ginsburg is emblematic. Her virtues are legendary and need not be recounted here. As a human, as a woman, as a public servant, she is exemplary. We all could and should find much to emulate. Why then are we abusing her and how?

It’s nice that you want to wrap her in bubble wrap and all and see her live to 120. But let’s face it, you want that for what she can do for you. Your intentions may be good but we all know about hell’s highway and paving material. Set that aside and your assessment that she may want to serve until the day she dies. That’s no one’s call but hers and is irrelevant to your question’. Boiled down, you’re basically asking an 85-year-old woman to stave off retirement to serve you. “Hey, great grandma, can you do another 15-year shift? Wolves are thinning the herd and we need you to defend the treeline.”

The Ginsburg Paradox is this: if she is emblematic, if she is a standard worthy of staking out and standing by, why is she seen as the last line of defense against the wolves? What happened to all the other mechanisms of defense for our democracy. Where is all the support she supposedly inspired? Isn’t the Democratic party engaged in that activity? Aren’t they supposed be filing all the electable slots with able minds and bodies of Ruth’s caliber? They say they are. They raise up her standards, campaign on them and then begin cutting fence wire and tossing red meat around.

Justice Ginsburg attained her position on the Supreme Court in 1993. I’m going to take a wild guess and say that’s twenty-five years. What is that, step one toward a two-century plan to politicize the Court, incrementally, in their favor? Or did the Dems lose the last two “picks” due to their devotion to the moral high road’ which in practice turns out to be; when they go low we follow but with considerably less skill. Yes, she’s a symbol of all we should aspire to. However, when viewed against their chosen standard, Democrats don’t measure up. Why else the perceived need to cushion, protect and imbue her with a supernatural lifespan? Because they’ve failed at creating a deep bench.

The emblem turns out to be a shining example of that time they did something right a quarter of a century ago. Had they been doing their job we’d have  ‘Bader Badgers” filling the House, Senate and governorships nationwide. They’d be defending the herd legislatively instead of resting on someone else’s laurels and attempting to politicize the one branch that is supposed to be a check and balance on the excesses of politicians.

The Ginsburg Paradox also illustrates another failing of the Party. Politicization of the SCOTUS has been going on for at least a hundred years. A party invested in upholding the foundations of our democracy should be doing all it can to reverse that dynamic and that perception in the mind of the electorate.

Both the Democrat and Republican parties, with an assist by media, have managed to paint a picture of the SCOTUS as a team sport. By cherry-picking cases, to that end, they do the public and the institution a great disservice. And offer us a false image resembling the floor of Congress. It is not that and was never intended to be that. It’s the legal branch based in Law. The Legislature creates and the Court weighs compliance to The Constitution. Justices rarely line up in accordance to Political team or allegiance to who appointed them. They are usually conservative or liberal in terms of their basic interpretations of the Constitution. From their standpoint “conservative” equals constructionist or a strict adherence to original intent. “Liberal” equates with the view that the document is living, requiring application and change to meet the progress of society.

In reality, the court functions more like a game of pool. The balls are set in motion by the stick, law. The justices apply various spins on interpretation and precedent when shooting. Their votes are represented by the balls. That the balls align with any particular side of the table, left/right from a political perspective, has more to do with where the Law propelled them not political agenda. A perfect illustration can be found in a recent case. Scalia sided with political liberals by voting with so-called liberal justices in Bullcoming vs New Mexico. The liberal justices argued the case on a strict conservative constructionist legal foundation Scalia agreed. The balls just happened to have landed on the left political side of the table. Scalia wasn’t Mitch McConnell and Ginsberg isn’t Nancy Pelosi. They work in separate branches each having their own unique tools.

I love Ruth Bader Ginsburg. I want to see her thrive as long as she wants, doing what she loves doing. I damn sure don’t want her restricted by bubble wrap while she goes about it. Or to be weighed down with a burden a multitude should be sharing. I want a world where our most esteemed elders, all elders, can retire without feeling guilty for leaving a gap in the defenses.. Where we can thank them accordingly for their service instead of sending them out alone as the last line of defense.