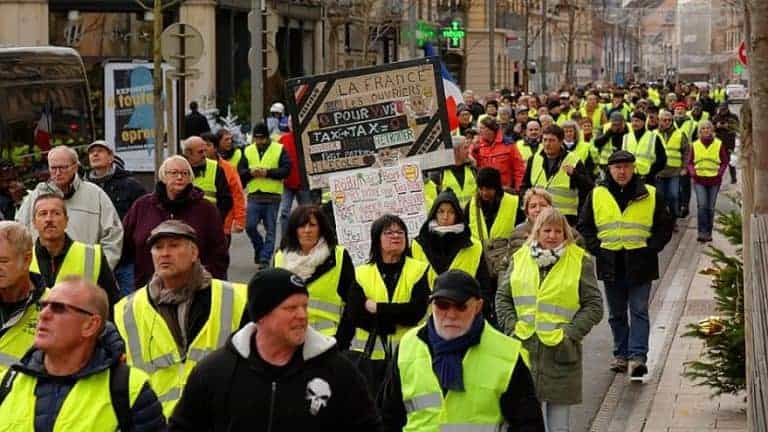 The movement of the Yellow Vests in Italy has officially adopted an MMT program. I refer to the program written by Warren Mosler, Mathew Forstater, and Alain Parguez in 2011, in Rimini, together with the investigative journalist Paolo Barnard (of which I have already spoken here). This program explains how to recover monetary sovereignty and implement a guaranteed work program. For information, we quote an excerpt of the statement published on the national page.

The goal of the Yellow Gilet is the exit from the euro. Objective shared by both the League and the M5S, but for political reasons has not entered the government contract. For this reason ours is not a criticism or a support for this or that other party.

So, even if we do not hide the disappointment from this government for having lowered to the diktats of the EU, ours is an absolutely peaceful and non-partisan movement, and wants the recovery of Monetary Sovereignty, sold in an anti-constitutional way in favor of a supranational organization of clearly neoliberal mold.

The euro is a tool invented to remove the possibility of public spending to countries, which is the tool of the financial elites to destroy the welfare state.

One of the most influential French economists Jacques Sapir, explained that the Yellow Gilet is first of all a protest against the euro, because even if the program contains many points, almost all is unattainable within the eurozone.

So we want to engage in sharing the struggle of our European brothers, and we will do it with peaceful protests and dismantling the hoaxes and media terrorism that fuels the fear of the exit from the single currency.

To those who tell us that there is no plan to exit the euro, we immediately reply that this is false. This plan has existed since 2011 and was carried out during the biggest economic conference in history, which took place in Rimini, which was attended by economists of the international caliber such as Warren Mosler, Mathew Forstater and Alain Parguez.

Among the objectives, also the opposition to the Franc CFA, an instrument similar to the euro but applied in Africa.

It seems legitimate to push the government to denounce in the European institutions the neocolonial instrument called “Franc CFA”, ie the “French euro” with which France subjects Africa and prevents it from developing economically. This is an official goal in the French Gilet program and was rightly shared also by the Yellow Gilet appeared in Africa.

In Italy the person who is more concerned with informing about this is the human rights activist Mohamed Konare, who we invite you to follow while he is still alive.

There have already been some protests, but they will officially start in January. The assumptions are definitely good.