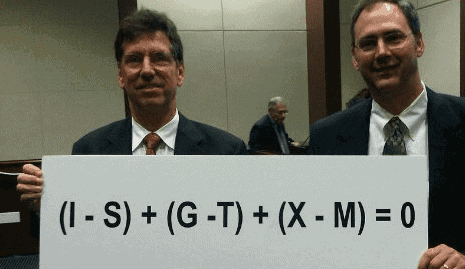 There have been quite a few hit pieces written on MMT aka Modern Monetary Theory in recent months. I assume much of this has to do with the meteoric rise of freshman Congresswoman Alexandria Ocasio Cortez and her connection to MMT economists such as Stephanie Kelton and Pavlina Tcherneva. There are people amongst us that have either a philosophical or opportunistic need to stop the momentum that MMT has picked up in recent years. I recently read a truly egregious article by John Tamny published the 27th of January in Forbes titled,‘The Flamboyant Absurdity of ‘Modern Monetary Theory’. Like all MMT hit pieces, it begins with the premise that it will debunk MMT as just a theory. Little does the author know or at least wants his readers to assume, the theory is just part of the name that developed when economists were still describing and organizing their body of work back in the 90s. MMT is simply an apolitical descriptive currency analysis and describes the economy as it currently functions. If you have not watched it yet, I highly recommend Professor Bill Mitchell’s explanation for the “T” in MMT. Suffice to say that Mitchell’s video will disabuse viewers of any such notions about MMT being just a theory.
To attack this theory, the authors of such pieces start by describing MMT. What follows is typically confounding to those familiar with MMT as the description does not describe MMT, not even close. Could someone who was familiar with MMT actually describe it as Tamny does without an ulterior motive? In the first paragraph of Tamny’s bloviating prose, he states, This most absurd theory of money can be found in the fantasy that is currency devaluation. It is assumed by the author that MMT calls for intentionally devaluing money in the name of trade. This is based on his errant notions surrounding what money is in our modern macro world. It is also based on the fact that he just said MMT was something it simply is not. Prattling on, he then alludes to some, in and out of the Trump administration adhering to such a notion. Here he wants the reader to infer that MMT is simply a theory of currency devaluation promoted by those within and without the Trump administration so that they may associate MMT with questionable sources. Nothing can be further from the truth. MMT has been studied, cultivated, and promoted by the world’s top economists such as Warren Mosler, Stephanie Kelton, Bill Mitchell, and L. Randall Wray for over two decades.

Throughout the article, Tamny engages in tautology. Every declaration is a variation on devaluation or getting something for nothing. He assumes that money is a finite resource, that any increase in the money supply will undoubtedly cause the dollar to devalue. By devalue I assume he is referring to demand-pull inflation where aggregate demand increases due to an increase in the money supply while the production of real goods and services remains flat or falls or as it is commonly described, too much money chasing too few goods. What Tamny ignores is that in our modern economy our money supply is elastic.

Prior to the depreciation of the gold standard, much of what Tamny has to say could be grounded in economic fact. Before 1934 a US citizen could take their US dollars and exchange them for gold and until 1971 and the end of the Bretton Woods agreement foreign governments could demand gold for US dollars. As the value of money was tied to a commodity it would certainly devalue against said commodity unless the increase in money was matched by an equal increase in the amount of gold held by the federal government. Unfortunately for his cause, this is no longer the case and cannot be taken as fact but as mere posturing and longing for his erstwhile gold standard.

Today we live in a world of sovereign fiat currency where the Federal Reserve engages in HPM, or high powered money creation, at the push of the button. Every time Congress approves an appropriation it creates net new dollars and as such destroys dollars upon taxation. This informs us that the government must spend money before it can collect taxes rather than collect taxes or borrow before it can spend. Yes, it is understood there would be nothing to stop the US government from demanding a bunch of existing US bills be deposited in a church collection plate at the end of a gun and then using the proceeds to spend but it simply has no need to do so. As Dr. Stephanie Kelton responded to the question of whether or not taxes fund spending, she simply responded, no, it is operationally impossible. To suggest otherwise claims it would be possible to collect $150.00 in taxes from an individual only holding $100.00.

To further illustrate this I point you to former Federal Reserve chairman Beardsley Ruml’s opinion in the January 1946 issue of American Affairs simply titled Taxes for Revenue Are Obsolete. Ruml’s observation is as simple as it is profound. A monetarily sovereign nation with free-floating fiat currency can never go broke. Neither Ruml nor MMT are trying to make the argument that a government can spend, spend, spend without consequence rather than the consequence will never be running out of money. The body of MMT work simply illustrates that real resources are our real constraint, not the dollars, yet Tamny doubles down on his assertion that MMT is just about printing money. In fact, he asserts that MMT scholars would suggest, Not enough prosperity, just add dollars you can’t make this stuff up! Well, apparently you can make this stuff up as there is nothing in the body of MMT literature that has ever suggested anything so ludicrous. MMT recognizes the real limits of our economy while Tamny does not seem to recognize the real limits of reality. Adding money to the economy, in his mind, can only devalue the dollar. What he fails to mention is that not all spending is the same. For example, spending for a green new deal will actually increase productivity in portions of our economy and increase real wealth in our nation. If we become a richer nation it only stands to reason that more dollars will exist but they will chase more goods and services.

If choking down this puerile view of MMT is getting hard to digest, be forewarned that the most overused and underthought out argument against MMT is yet to come in this smorgasbord of ego-driven drivel. That’s right, inevitable comparisons between the US and countries with different monetary systems, political fortunes, and productive capacities. Enter the Venezuela argument, Back to reality, money is an effect of production as opposed to a driver of it. If you’re productive in ways that others value (call others the market), the money will find you. Evidence supporting this claim comes to the care of the supposed enemies of the U.S. countries like Cuba, Iran, and Venezuela. Amid the slow growth and suffering that is the norm in each, there are pockets of productivity. Crucial here is that U.S. dollars liquefy the trade of that productivity (much of it in the black market) despite unhappy relations between the U.S. and said countries. The author not only makes an asinine assumption about the origin of US Dollars but ignores the significant differences between the US and these other economies.

In fact, comparing the US to Venezuela is comparing apples to oranges. When Venezuela decided to take on debt in foreign currencies it essentially gave up its monetary sovereignty. The US only has debt in US dollars which we create at will. This means we can never go broke nor can the US dollar be devalued as it is not pegged to another currency or commodity. This means the US government can spend without seeing significant inflation as long as aggregate demand does not push past full employment/productive capacity. A better comparison would be between the US and Japan which like the US is monetarily sovereign. Japan currently has a debt to GDP ratio of 260% and still can’t hit its 2% inflation target. The current rate in the US is currently about 110%. Common sense can only tell us we have quite a bit of fiscal space available for ambitious programs such as a green new deal, student loan elimination, and Medicare for All. Tamny bandies about the discussion of resources as if MMT did not recognize the importance of the productive capacity of a nation. MMT clearly asserts that the real constraints of our economy are based on real resources. For someone so obsessed with commodities this should be a fairly easy leap. It is important to remember MMT just describes things as they are. MMT promotes the understanding that while gold is not necessary to create money, it is necessary to create catalytic converters. Tamny would be wise to gain an understanding of MMT before choosing to once more drive off the cliff of reason.