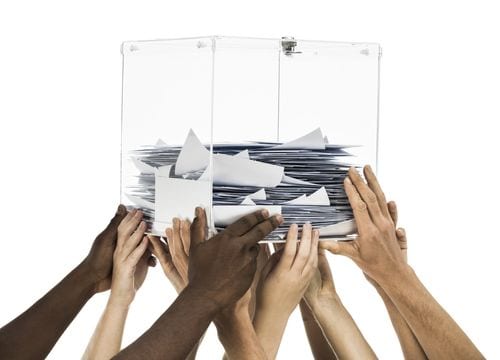 In part 1 of RP’s exclusive interview with John Brakey, we covered the importance of the distinction between election integrity and election transparency, and how John Brakey himself devised a plan of action with which to highlight this point. It isn’t a plan to enact measures ensuring the validity and verifiability of our vote totals, it was a plan to make sure that security measures already put in place were actually utilized and maintained.

In this installment we will explore the necessary methods employed to ensure election transparency, and how they will likely impact the US election process, going into 2020.

These “necessary methods’ usually took the form of litigation, on the basis that public records were not being made public, and in some cases not being protected from outright destruction. As crazy as it sounds, our vote totals are owned and tallied by private corporations, and the only means we as voters have at our disposal to combat this abuse is routinely thrown in the trash.

The craziest thing is that most don’t know about the destruction of the ballot images, simply because they never tried to check them. If they had, they would immediately be confronted with undeniable truth number one: they are not public. Many will not realize that these ballot images are a matter of public record, and therefore cannot legally be kept out of the public record, but they desperately need to realize it. They are counting on our lack of knowledge, and time and time again we are forced to remind election officials that what they are doing is illegal.

That doesn’t mean we need to stop issuing those little reminders, because when we have to fight, we win.

The fact that our system of Democracy depends on an accurately verifiable election system is reason enough to consider it a high priority.

It begs the question: If we can detect that fractionalized voting occurred in a location, can’t we determine what percentage each candidate running in the race was artificially capped at, and use those ratios as a basis to figure out vote totals across all voting districts? Could this then be used to gain a true vote total from the 2016 primaries, or general election?

To put it simply, can we reverse-engineer the slanted vote totals to finally, conclusively determine who really won the last several major election cycles?

In a word, “no” . Those vote totals are gone, likely forever.

As programmer Benny Smith demonstrated in the video “Fraction Magic” , though the numbers can be run through a filter of sorts, all results for all races can be tweaked on the fly. There is no way to reverse the operations used to alter the vote totals, nor is there designed to be one. That would require a record of the events, and the system does not seem to be designed to provide one.

The reason why we can’t determine the vote totals is because we can’t glean a clear picture of their true numbers without two things: A) Hand-marked paper ballots, and B) Digital ballot images. The digital images are easy to store, classify, and access for data, but they cannot be verified without the original paper ballots. They are both important, and must both be maintained and protected.

And yet John Brakey’s work is not spared from attacks from people who say he misses the point with his approach, in choosing to focus on transparency, rather than election accountability.

But those who simply must focus on the black box ask yourself this question: “What is it that I’m really wanting from the box?” If your answer is “A legitimate vote count” , then focus on transparency, and that’s exactly what you’ll get. While the agencies in control can still use their manipulated data to try and swing elections, the fact is that we will be able to conclusively prove that OUR vote totals are accurate, and all they will have is their word; the word that we’ve all been forced to take them at, for years.

They only steal if they have impunity. And they know the systems in every state. The people who do this, they’re masters, okay? In Arizona, if they’re stealing, I know where they’re stealing, they’re stealing in my vote-by-mail because it’s wide open. And they can actually ah, they’re not sorting the ballots in Arizona they’re run through a high speed scanner, one box in Pima County with 1,000 ballots can have 400 different precincts in it, okay? There’s no accountability. How do you do an audit? You’ve gotta sort the ballots out. Now, ballot images? Whoa, I can put ’em on a spreadsheet, attach the images to them, and then say ‘sort them by precinct’. BOOM, there’s precinct 101, whoa, let’s count that one!”

Once more for those in the back: Hand-marked paper ballots + publicly posted ballot images = a true, verifiable vote count that can be conclusively proven against any other tally, obtained by any other means, by anybody else.

That is our vote tally. …Our real one. We made it, with our own hands.

According to Brakey, many states already use ballot images, and many more are set to use them by 2020.

So let’s not let this loss sadden us to the point of inaction, let it strengthen our resolve to do something about this problem, and solve it!

After speaking with John Brakey for a little over an hour, one of the main impressions I was left with was how closely Brakey and his “ET” (election transparency) ilk’s message mirrors Real Progressive’s. Both messages are not only of personal empowerment, but collective unstoppability. Both focus on non-partisan unity, progress, hope, and actionable plans based on verifiable truths.

And both fight against a wall of programmed apathy and hopelessness. …The progressive “give up” strategy at work. When you don’t have an actionable plan based on verifiable truths, what you’re left with is desperate screaming in the wind.

We both offer a way out.

What’s more, MMT activists can be seen as already living the “ET” philosophy in our work. We know about the “black box” , or core of corruption hijacking our economic system, but rather than just attacking it head on, we educate as many people as possible about economic truth.

If we are all educated about our economic reality, then the people on the inside will be compelled to behave. Our collective knowledge will force them to comply, just like the knowledge of our true vote totals will compel the election establishment to comply with our wishes, and stop manipulating them.

The worst thing you can do is “nothing’.

For those who say “What’s the point in voting, when my vote doesn’t count the way it’s meant to?” John Brakey has a message for you:

“Well first off, you need to understand the problem, because it is a very huge problem. In 2016, if “not voting’ was a presidential candidate, they won by a landslide, okay?

Then what did Hillary get, 28%? What did Trump get, 27%? I want you to know, in 1934, Adolf Hitler got 34% of the vote. Our democracy is in trouble because a lot of people, in my opinion, almost including me, want to join the Mark Twain party.”

The true power of election verifiability still rests within all of us collectively, as voters!

Either stand up and demand that election officials provide handmarked paper ballots and maintain their ballot images yourself, or support those who do that with every breath they take.

Why not do both?