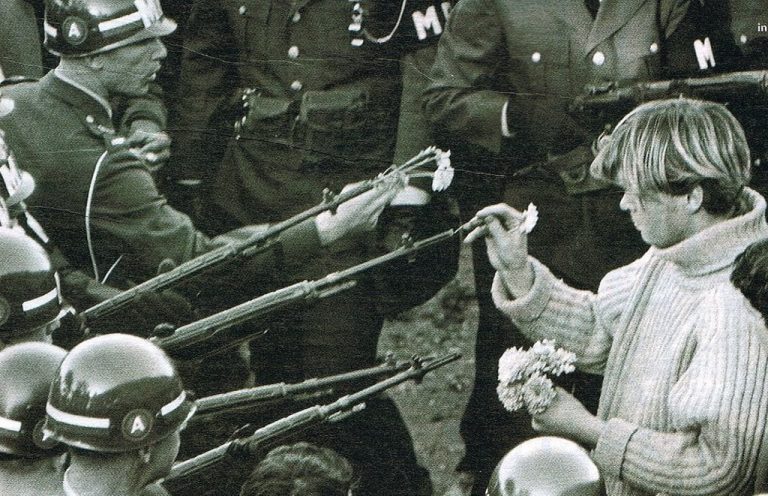 No Justice, No Peace

It is no secret that Real Progressives demand broad, bold, fundamental changes to our society. The price tag on these things is shocking to many, and we are invariably asked to explain how we can possibly accomplish such “expensive” things as tuition-free college, universal healthcare, and a Jobs Guarantee.

When commentators and pundits ask “How are you going to pay for that,” it’s become almost a cliché to point out that we pay more, without complaint, for our military than the next-highest eight countries (China, Russia, Saudi Arabia, India, Japan, France, the UK, and Germany) combined – $611 BILLION in 2016 alone.

This is, of course, a terrible indictment of our national priorities. But there is a lot more to it than just that.

Why do politicians and the elite peddle “sticker shock” at social programs – like a New Deal – yet not the same “sticker shock” at our bloated military costs?  One reason, of course, is that the military budget – much of which ends up in the hands of private corporate contractors – goes into the pockets of those that fund our “representatives’ ” political campaigns. When money is being called into existence “out of thin air” to enrich our oligarchs, but cannot be leveraged to help our own citizens or even the veterans of the wars we’ve started, we can see clearly that the elite have stolen our system of money creation and leveraged it to their own gain and to our detriment.

Another reason is that creating this money “out of thin air” is not actually problematic, as long as enough money exits the system either by fees/taxation, bond sales, hoarding (which the private contractors do) or by actually producing real goods and services. That is why they do not react with “sticker shock” over military spending. It is the production of real resources and their distribution that matter – not money, which simply oils the wheels. There is a lot of reasoning for this position elsewhere in our literature; so I will not cover much of this here. For more on how this really works, see: http://elliswinningham.net/index.php/2017/09/04/federal-taxpayers-not-fund-federal-government-federal-government-funds-federal-taxpayers/

If “inflation” isn’t a concern, the only possible explanation is that those that accumulate vast amounts of wealth love the status quo and will work to perpetuate it. Reducing spending on war for moral reasons – while increasing spending on a New Deal for both moral and economic reasons – is precisely what we want and precisely what they don’t.

If there were a garden filled with various types of crops, but the farmer only watered the beans, the other plants would starve. Yet there are many “crops” in our garden (economy), not just the military. The farmer (Congress) consistently starves many other “crops” while lavishing spending on the military and corporate mercenaries.

Practically speaking, this means the ruling class in America is killing its own people and funding the death of others – for the sake of money.  This is not just a sin of commission (violence) but a sin of omission (the injustice of starving the other “crops” of our economy in the meantime). Creating a shift in this dynamic is what we refer to as “economic justice.”

Martin Luther King, Jr, once said, “True peace is not merely the absence of tension; it is the presence of justice.” This is self-evident, because without justice peace is threatened, and if peace has been violated there has been injustice.

It is not just the reckless arrogance of US foreign policy that Dr. King’s statement applies to, though. There are plenty of examples right in our own backyards.

Consider the constant police action targeting African-Americans in Los Angeles and how it created fertile ground for the growth of gangs, formed in response to such brutality and discrimination (https://www.nationalgangcenter.gov/Content/Documents/History-of-Street-Gangs.pdf). No justice, no peace.

Consider the lack of justice in school funding in these same communities, especially compared to schooling in more affluent areas. This systemic lack of opportunity helps to engender continued and deepening racial economic disparities, leaving more people in desperate situations and thus more likely to engage in desperate behavior (http://open.lib.umn.edu/sociology/chapter/16-4-issues-and-problems-in-education/). No justice, no peace.

Consider the amount of stress Americans are under: wages barely keeping us afloat, student loan and medical debt strangling our ability to live healthy and prosperous lives, lack of savings, rising prices (https://www.cnbc.com/2018/06/26/money-is-more-stressful-than-work-or-relationships.html) – and a complete blockade to mental health care on top of it all (https://www.ncbi.nlm.nih.gov/pmc/articles/PMC5563010/). Seemingly constantly we hear of mass shootings. No justice, no peace.