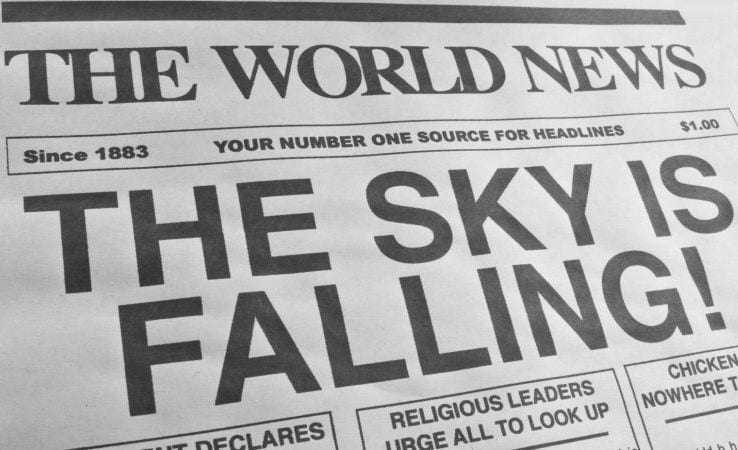 That Thing You’re So Afraid of is Already Here

It’s not unusual to find misinformed people creating spicy word bombs designed to express their undying hatred for “that modern monetary theory” , particularly right now. In fact it’s the similarities between these attacks that are the real smoking gun.

While it’s not unusual for untruths to become propagated and spread as they make the rounds of various news media, the extent and voracity of some of these attacks can only be seen as a widespread smear campaign. It’s also disconcerting to see so many of the same distortions applied time and time again, when so very little actual effort is required to find out otherwise. The desire to know the truth must be present, or no capacity or ability to know will make any difference.

This article is certainly no exception.

First and foremost it fails to comprehend that MMT is a scientifically derived description of the way in which money is already made, used, and taxed away in a monetarily sovereign nation with a fiat currency like the US. MMT already “is’ in the US, and has been since 1971 when Nixon took our currency off of the gold standard.

Therefore fear mongering what might happen if MMT were to “be enacted’ is a moot point.

But along with the normal national debt fear-mongering motif usually found peppering these articles, this one features a fallacy found all too often in these misdirected attacks: the belief that MMT represents totally unbridled, irresponsible spending.

The reason why it “sounds ridiculous’ is because it’s based entirely on a totally slanted, ignorant concept of what MMT is about.

Again, just because sovereign currency issuers producing fiat dollars can theoretically produce infinite dollars, that does not mean that they should, and MMT is well aware of the difference between those two things. If an economy can absorb the influx of new money, then inflation can be avoided. If it can’t then inflation can occur.

In other words, if we want to espouse a trillion-dollar infrastructure deal, and we don’t have enough steel, concrete, man hours, spare manufacturing capacity and machinery, then we can’t afford to enact it. It’s real resources that are the only real constraint, not a shortage of dollars.

But economies can be invested in where it really matters and grown. Once that happens, then we can enact our trillion-dollar budget by ensuring that we have enough jobs and factories to do what we need to do. Part of this can be accomplished simply by bringing some of our outsourced production jobs back home.

But the longer we stand and proclaim the situation, the longer it is hidden, warped, and attacked with empty condemnations by those who seek to continue benefiting from its hidden nature. For the longer the myth that we need billionaire’s money is maintained, the longer they will be able to buy our government. Our government is financially self-sufficient, and we’re promising important cabinet positions to billionaires in exchange for their money.

…Do you see the problem?

It’s not “hyperinflation” or “the deficit” , it’s corruption, and deviation from the intent of the US Constitution.

This is what happens when people take one or two points from an entire system of thought, make up the rest, and call it “a position of informed opinion’. When people do this they either do it out of ignorance, or completely deliberately.

The best way to illustrate this is to go back and read the article again, like this:

“The biggest sticking point to implementing the sort of large-scale military programs championed by American conservatives has always been finding the billions, or in some cases trillions, of dollars to pay for it.

The right wing of the Republican Party has seized upon a convenient solution to this age-old conundrum: Modern Monetary Theory, or MMT for short.”

That is how that article should have read. It should have gone on to say that with MMT, Congress can simply pass budgets which bring forth all new money into existence, without raising any new taxes, or causing hyperinflation, as the Trump administration demonstrated by passing a 1.2 trillion dollar military budget (only about half of which actually went to the military) without doing either of those things.

As long as we have the manufacturing capacity to absorb the new money, there is no hyperinflation. The only constraint is real resources. Republicans prove MMT constantly, while they undermine belief that it even exists for progressives, who simply want to enforce the will of the US Constitution, which was written in order to provide for both the common defense AND the general welfare of citizens. Article 1 section 8 empowers Congress to use its monetary sovereignty to pay for both of those things.

WHY is it these issues only come up when people need to be educated, fed, housed, or healed? WHY isn’t the same standard applied when military budgets are passed? Yes liberals wail and lament them, but without the knowledge of MMT and Constitutional law, they will never have anything backing their distaste for it, except for an amorphous sense that this situation is indefensibly unfair.

MMT is your defense.