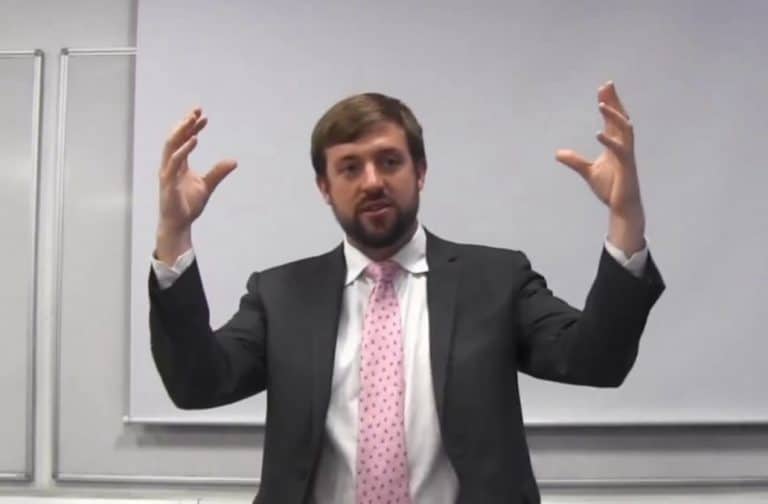 An Interview with Rohan Grey – Part 1

A wet New England day in April, I drove down from Salem, MA to Harvard University in Cambridge, MA and no, I did not park my car in Harvard Yard. If I did, I would have been arrested and my car towed as Harvard Yard is for pedestrians only. The rain was somewhere between a drizzle and a mist, the air chilly, but finally, a spring chill. Even though spring had arrived a month earlier, Climate Disruption had been putting a winter chill in the air. I walked past the entrance to Harvard Yard and an urban intersection later entered Harvard Law school’s main building on campus. Packed with students going to lunch and heading to their next class, I found the small lecture hall that was my destination. Entering the room about fifteen minutes early, I saw the guest speaker, Rohan Grey, talking at the front of the room with another man. We said a quick hello to each other as I sought out Martin, the student sponsor of the presentation. Rohan would be doing a presentation about how we can afford the Green New Deal.

Rohan is currently attending Cornell Law School, but is quite accomplished already. You can read a brief biography here. His presentation lasted about an hour, covering many observations and explanations of why Modern Monetary Theory (MMT) describes the fiscal space available for direct government funding of the Green New Deal. He speaks from the perspective of a person educated in both law and economics. As we will see later, the combination makes for an alternate framing in both disciplines.

Highlights of the presentation got off the ground with a critique of many orthodox economists who lack the desire to apply imaginative thinking about approaching solutions and definitions for long-held economic assumptions. Their thought deficit is clear in many of the critiques of MMT, especially surrounding the subject of debt. He noted that the world debt means that there must be an equal amount of assets in the world, unless Earth owes that debt to Jupiter. Another salient observation was the reliance by media and orthodox economic academia is to rely on future predictions made by economists whose predictions have often failed. My favorite point he made was a restatement of something Prof. Stephanie Kelton noted. She described neoliberals as people that do not understand the fundamental MMT description of where money comes from, which is: money is created when the government performs the act of spending. Neoliberals, on the other hand, believe money grows on rich people and if we just shake them hard enough, we will have enough money to pay for things like the Green New Deal.

Once the presentation was over, and after a twenty minute break, Rohan and I met in a small meeting room where I had the opportunity to talk with him one-on-one for just over an hour. This was the first time I had ever conducted such an interview, so for me it was a big deal. The rest of this article will cover the start of the interview where we explore the intersection of law and economics. A second part will follow covering some ideas on more specific subjects.

I first asked Rohan about how he ended up “specializing” in combining Law and Economics. His response led us back to his childhood. Rohan noted that his father was a lawyer specializing in personal injury cases, many of them involving persons who were injured at work on government jobs. As a youth, he recognized that somehow there was a monetary value associated with associated types of injury and which body part was injured. We have all noted this in insurance plans that will pay out an amount of money for the loss of use of a finger being valued more than the loss of a toe. The connection between economics and the law, was established in Rohan’s worldview. Another part of that worldview is the deep-set dedication to improving society. As he moved forward in his college education, he began questioning how those various calculations are made. Other questions arose about how economics synchronized with the law. As an undergrad he and other students talked often about the Constitution and government agencies. Questions arose around what the impact was economically of fines levied and taxes imposed. Do they serve the purpose they were implemented for? Surely, he thought, graduate school professors would supply the answers.

Soon after entering graduate school, Rohan came to the realization that law professors did not have the answers. Most had taken a fundamental economics course as an undergrad and never gave it much thought afterwards. To fill the gap between the law and how the law can be used to make a better society, Rohan found MMT. The scholars studying MMT were, of course, economists. But unlike many persons studying orthodox economics they focused on how things worked. For something to be accepted as part of MMT, it had to accurately predict results. Over the past 30+ years a set of ideas and hypothesis have come together to create the Theory of Modern Money.

Speaking further about Economic and legal history, Rohan spoke about the past and around 30 years ago there was a movement in legal circles to implement requirements that contracts needed to be written in plain language. Instead of using a lot of terminology that was not accessible to the average person, the inclusion of wording to put all the provisions into plain language made contracts understandable to anyone. Over time that requirement started being ignored and by now, mostly forgotten. MMT echoes that plain-language requirement, because it takes the complex and arcane language of economics and makes it comprehensible. Rohan astutely pointed out that once a person learns MMT, it makes it much easier to further understand economics. So much so, that it “becomes part of your DNA” . Learning MMT and “grokking” it colors your economic, political, and social world view. You can then imagine how the law can be used to improve society.

This concludes the first half of my interview with Rohan Grey conducted at Harvard University on April 18, 2019. Due to the subjective nature of this piece, the recorded version of the interview will be released along with Part 2.