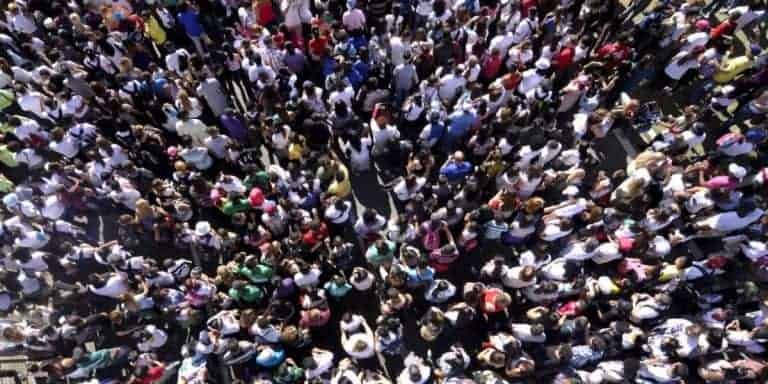 The Problem is Not the 1%

While this statement is an accurate portrayal of the situation we all find ourselves in the middle of, it is misleading in that it suggests an abuser-victim relationship. And while THAT may sound at first to be equally accurate, I will explain why it isn’t. In that relationship are two roles: the abuser, and the abused. The only solution is for the abused to find the strength to escape.

But where would we run to?

Here’s the problem: If we focus solely on the 1%, we take the burden off of ourselves completely. In this abuser-victim relationship we can only point fingers and cry.

But the real change we so desperately need will never come this way.

…Which brings us to another very unfair, and uncomfortable truth: ultimately the problem is not the 1%. Ultimately the problem is US. While this will sound to many as a slap across the head at a time when their head is already pummeled from every angle, the fact is that the 1% simply could not do what they are doing right now if people …”we”, were different.

There is a major concept in our movement today, and in all grassroots movements that fight for the rights of everyday people against an oppressive force, and that is that real change only comes from the ground up, not the other way around.

One of the reasons why change must come from here is because WE are the ones that must bring that real change for the better, and in order to do that, we will have to change ourselves. If we aren’t the change, then there will be no change.

Because the fact remains; if people were braver, and thought for themselves to a larger degree, we could break the circle of codependence locking us into seemingly perpetual abuse cycles. We simply do not need corporate influence in spite of their incessant cries to the contrary. They need US to continue buying their cable television services and hamburgers, in order to fund their propaganda machine. And before anyone says “I don’t pay for my cable TV, it comes with my internet”, if nobody watched corporate programming, their ad revenue would plummet. They simply would not continue to pay to produce programming that only 3% of the population actually watched. They would move onto other areas where their money spoke louder.

…But this is about more than just ‘hitting them where it hurts’, in their bank accounts. That’s not to say that we can’t influence them on this basis, but what we’re talking about is much more than just mass civil disobedience via boycott. Before that can even begin to happen we need to start talking about overcoming intentional obstacles, placed before us to divide our power and slow our progress. These obstacles impede our actions, but more importantly they prevent our thoughts and feelings.

“I teach my children to question everything.”

While your initial reaction to this sentiment might well be positive, there’s an important aspect missing which many may not see coming. First of all, balanced cynicism is healthy. It’s good to question everything, but if you declare every question to be ‘un-answerable’, then you’ve achieved a self-defeating level of cynicism that breeds apathy, which is kryptonite to our movement. We are defeated before we even begin.

While an inquisitive nature is important to nurture, we should be equally vigilant in preventing our children from forgetting the important distinction between being inquisitive, and giving themselves over to pessimism outright, which seems to be the inevitable reaction these days. We need to be vigilant that we remember that distinction, as well.

We need to be teaching our children the importance of taking responsibility for thinking for themselves, and outright rejection stops that process completely. Thinking for yourself does not mean rejecting all contrary data, it means analyzing that data to determine how it might relate to you. It means determining how this PERSON might relate to you.

Most of all we need to be instilling the concept that we are all inter-related, and all inter-dependent on one another. Rugged individualism is great, but lose the importance of your relationship to everyone else, and we all lose.

But nobody says “I teach my children to trust other people.”

And yes, there is definitely a finger pointing at some Trump supporters here, but the problem is universal. Nobody trusts the government, but if you teach your kids that problem can’t be fixed, they will never try to fix it. They will also never help anyone else who is trying to fix it. They’ll just laugh at them instead.

Wear that cynical hair-shirt if you must, but don’t try and put it on your children: it’s too small for them.

Sadly, the fact is that even if you DO instill these important ideas into your children, there’s no guarantee that they won’t succumb to societal pressures anyway, and give up like the other cool kids.

After all, we aren’t very nice to people with simple, positive messages 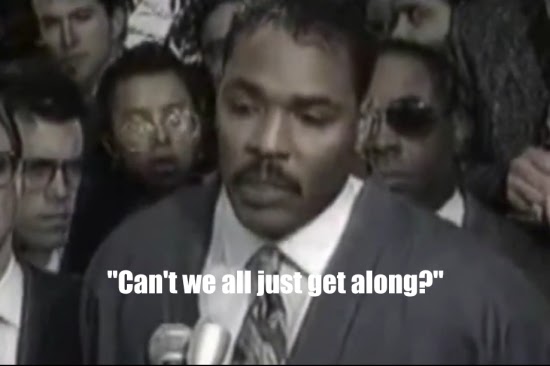 That event is rather old, but it’s a great example of what happens when the simple truth is the elephant in the room. And what did we do with that simple, positive message, as a society?

We mocked it relentlessly …ruthlessly. Who ever HEARD of such a ridiculous idea? PEOPLE? Getting along? Don’t make me laugh.

YES, Rodney King was nervous. YES, he was overwhelmed at being suddenly shoved into the spotlight for purely political reasons. He was also 100% right, and everyone was so obsessed with the superficial details of ‘how he spoke’ that we all lost sight of the validity of ‘what he said’, never mind the importance of it.

It was a cheap setup, and we fell for it. Without regard to the perpetrator of warped framing, we’re the dumbasses who bought it off the junk shop wall.

For while society may be shaped in part by those heavily invested in ulterior motives, ultimately it is US who have to take responsibility for what we have allowed to be twisted and warped out of all recognition. We MUST be better than that, and ultimately we have nobody else to blame if we can’t muster that improvement. It starts with US.

That specific example may be old, but it’s still sadly relevant today.

In this society it is almost always considered acceptable to err on the side of pessimism when it comes to most things, and politics is definitely no exception.

Yes it’s important to be a unique individual, but if you stop thinking, you’ve lost a large part of what makes you special. You’re just like everybody else. Part of that thinking process revolves around trusting other people enough to work with them, and respecting their ideas enough to give them due consideration.

Not everyone is out to get you — some people do actually have good ideas, and we can in fact exact positive change on our collective environment if we can just talk to each other long enough to make it happen.

Ultimately the problem is not the 1%, the problem is us. The 1% is merely a side-effect of our inability (pronounced ‘unwillingness’) to see the truth accurately, and grab the reigns of our own destiny accordingly. They study our nature, and exploit our weaknesses. If we study their nature, we can do the exact same thing to them.

Step one is to realize they do not have all the power yet. We do.

It’s time we started taking the time and responsibility to act, and stopped letting them erode our hope!