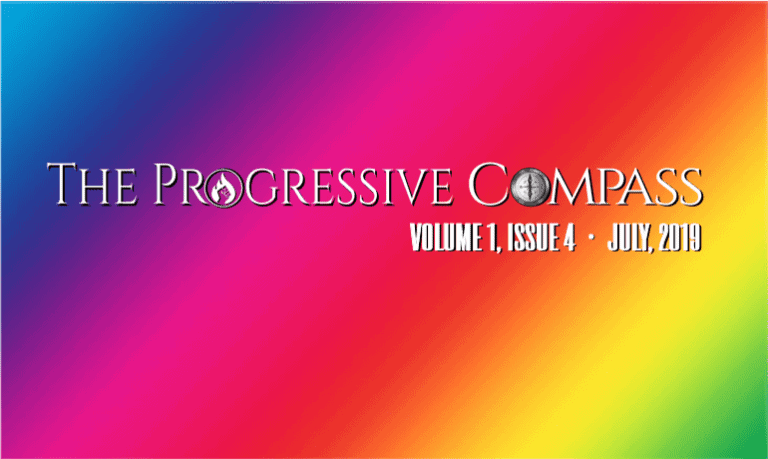 Pride month wraps up across the country with a celebration of LGBTQ+ members and allies. In Chicago, a new event, Chicago is a Drag Festival, hopes to provide an inclusive space for transgender persons, queens of color, and drag kings – all groups often overlooked within the gay community.

Protests have erupted around the country as Americans are increasingly alarmed at the conditions being reported in immigrant detention centers. The situation grows more dire as reports of injury, death, sexual assaults, and the separation of children from families reach the public through various advocacy groups and public officials. Some protesters have been arrested, but nowhere else have allegations of brutality surfaced until the July 3 events unfolded in Carrizo Springs, Texas.

War On Iran Averted for Now: Why Didn’t Trump Invade?

In this live stream, Trish discusses some of the possible reasons for Trump backing away from invading Iran. Greta Thunberg calls for ending meat and dairy consumption to address the climate crisis at hand. Trish also discusses Tucker Carlson of Fox News who surprisingly called out John Bolton, calling him demented for his stance on Iran. Tune in to watch this exciting stream. Note: The opinions expressed in this video do not necessarily reflect the views of Real Progressives.

Real Progressives focuses on seven knowledge areas. This month we are spotlighting the Equality pillar.

This series of articles begins with a discussion of how the religious piety of early America shaped the way homosexuals were treated. After this period the medical profession classified homosexuality as “outside the norm” and considered it a diagnosable disorder. The series goes on to discuss the excessive discrimination against lesbians during these years when women had very few rights. Lastly, the series ends with a degree of optimism, discussing the universal evidence of love, commitment, fulfillment, and joy in a time when much was done to disavow such relationships.

Preachers Who Say ‘Kill The Gays’

This article was not written to condemn Christianity but to focus on a basic human rights issue. It addresses the very serious issue of the psychological and social impacts of community figures of authority spreading messages which not only endorse unfair treatment of homosexuals but also endorse their violence and outright murder. Read this article to gain just a small understanding of what it might be like to grow up in towns where the bullies are heroes and the innocent are despised.

Fear Will Not Kill Prejudice

This article addresses the big picture of bigotry, prejudice, racism, and the larger system which perpetuates it. The author discusses how we often use fear to fight these issues but inadvertently end up driving them underground where they are more difficult to gauge, recognize, and eventually deal with.

Author Steve Grumbine discusses the stigma of being called “gay” or “queer” in the 1980s and the tribalism and fear one experienced at the threat of becoming a member of the out-group. He makes a brilliant comparison with the political scare tactics used in regards to socialism and how our own government utilizes manipulation and peer pressure to scare the population.

MMT is the cornerstone of the Real Progressives movement. As such it is constantly under attack. Here we have a few RP responses to popular mainstream/neoliberal hit pieces.

Seize The Means of Production of Currency – Part 1

The Tribune recently published an article unequivocally titled “Against MMT.” Here is the response by Bill Mitchell and Thomas Fazi, leading proponents of Modern Monetary Theory, arguing that socialists should not be afraid to “seize the means of production of money.”

The Clock Runs Down on Mainstream Keynesianism

The finance section of Twitter went abuzz for several weeks when Paul Krugman and Stephanie Kelton began sparring in March. According to Krugman, Kelton’s analysis is “a mess” and she is guilty of “goalpost shifting.” It is imperative that these distortions be addressed in public; this article is Stephanie Kelton’s blow-by-blow defense, published on Bloomberg./h3>

Are “Last Chance Agreements” Anything More Than an Employer Trick?

Employers are resorting to increasingly more insidious means of control in their war against labor. Attorney Joshua A. Douglas looks at employment contracts in New York, a state with a “right to work” law that is anything but, and exposes blatantly illegal means of exercising power. If workers are unaware of the treachery embedded in their contracts they will be more vulnerable to it.

Another Fourth of July has come and gone and with it another bombastic celebration of freedom. Freedom is one of our most celebrated ideals, and for good reason. These days, though, it seems actual freedom is in fairly short supply; and, depending on who you ask, it can mean different things. Nathan Locke explores how the trappings of freedom have obscured the essence of it in this reflection.

What Is The Difference Between Monetary and Fiscal Policy – Part 2

What are monetary policy and fiscal policy, and how do they differ? In this multi-part series by Ellis Winningham and Sherry Wise, we define these two types of economic policy and explain their implementation and efficacy. With a little history to provide context and help you understand not just what these policies are, but their impact on our lives, this series gives a deeper understanding of MMT, and economic policy in general. In Part II we take a look at how banks actually lend and examine monetary policy in more detail.

These are selections from Real Progressives’ audio and video work, from our Macro n Cheese podcast to our various live streams and video interviews.

Climate Refugees and the Economic Solution to Xenophobia with Fahdel Kaboub

PODCAST: Lessons in neoliberalism: how to destabilize an economy and propel a global refugee crisis. Steve’s guest, Fadhel Kaboub, of the Global Institute of Sustainable Prosperity, explains the connection between neo-colonialism, climate chaos, foreign trade deficits, and decades of austerity.

VIDEO: Ron Placone and Graham Elwood take a break from their Progressive Comedy Tour to hang out with our own Savage Joy. The three of them engage in the ever-popular pastime of punditry, speculating on the motivations, successes, and epic fails of our favorite (and least favorite) candidates.

VIDEO: Steve Grumbine talks about the hypocrisy of “fiscal conservatives” who raise the alarm about federal deficits and the so-called national debt while approving huge budget increases for spending which benefits military and defense contractors or the fossil fuels industry. As the father of an autistic son, Steve is affected personally when funding is slashed for programs that provide services for children with special needs.

These memes can be turned into postcards! Simply download the PDF versions provided. The first image is the front of the postcard and the second image can go on the back of the postcard. Go to Vista Prints and pick the 4X6 postcard. Crop and rotate the images as needed. 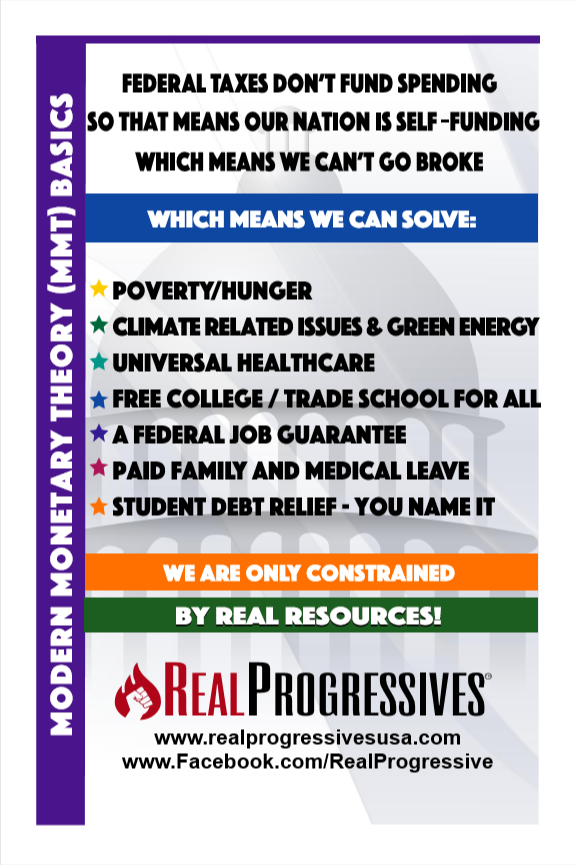 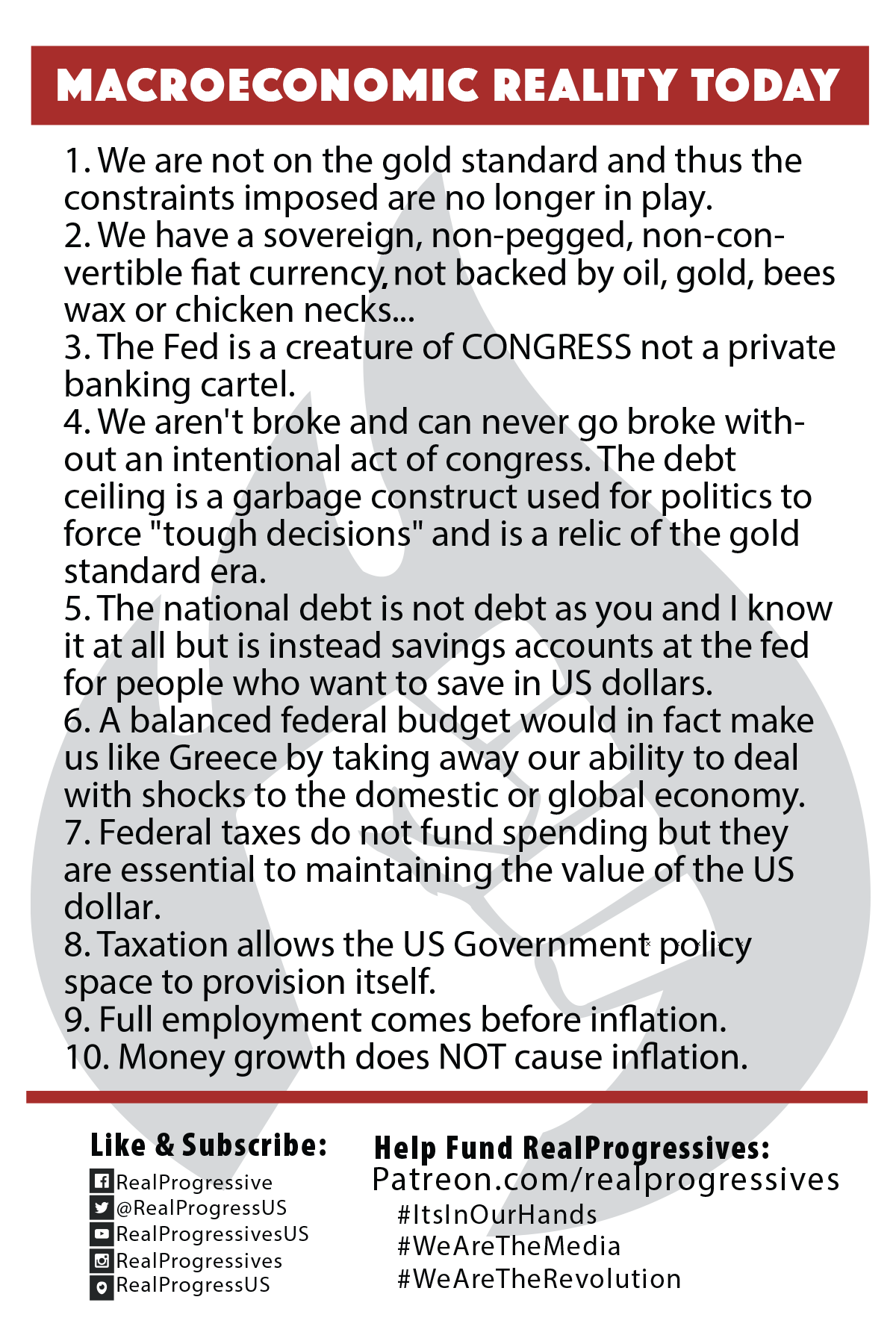 PDF Version for Postcard Back for Printing
PDF Version – Postcard Front and Back for Printing
We hope you enjoyed this issue!
Forward this newsletter to a friend, they too can sign up to get mail here!
Like and subscribe or follow us on Periscope, Twitter, YouTube, Facebook, and Instagram.
Please help our Real Progressives efforts and become a monthly donor at PayPal or Patreon.
Thank you for the continued support.

Explore these and many more potential roles with Real Progressives. We’ll train you!

Click HERE to register as a volunteer.
Questions? email us at questions@realprogressives.org