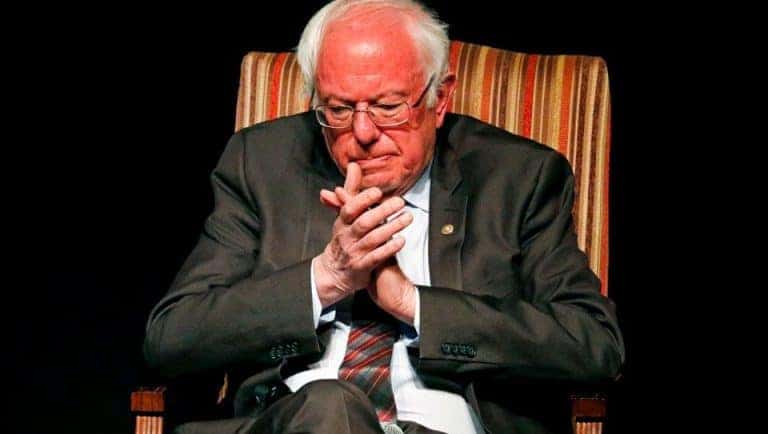 This is Why Bernie Sanders Doesn’t Talk About MMT

As progressives, when we hear Bernie Sanders talk about raising taxes on the middle class in order to pay for programs designed to build the middle class, it’s hard not to become despondent, and assume your fight to promote the truth of Modern Monetary Theory is all for nothing.

Why should you fight so hard, when those above you simply make your fight harder? You go out on a tenuous limb to educate people about a truth, to replace a lie that’s been cemented into their heads by years of enforced groupthink, and is therefore nearly impossible to dislodge, and the people they look up to are telling them not to listen to you.

They don’t want to listen to you. To do so would mean letting go of many ideas which they rest their heads on. To do so would mean losing yet more stability in their lives, as their heroes continuously remind them that you don’t know what you’re talking about, and to just stay on the couch where it’s comfortable.

And as a result of that, it’s hard not to look at Bernie Sanders as anything but a thorn in your side, working against all that you stick your neck out for.

But let’s try and keep things in perspective.

Possibly the most important thing to keep in mind about Bernie Sanders is that he is a politician, and that kind of animal has to operate within an ecosystem. If he pollutes his ecosystem too much, then he won’t be able to continue to do his job in it.

This is at least partly the reason why Bernie Sanders has consistently stated that real change must come from the bottom up. He is working at the top level, where the rules are not the same. In that environment, he must play by the rules of what people already know, or think they know, rather than playing the role of a teacher.

Unfortunately, the fact is, as much as we do as Real Progressives, and as hard as we work, most people still do not understand US government spending. In fact, the situation is far worse, as most think they do know, but the version they can dictate to you verbatim is not only wrong, it was tailor-made to suit them.

It doesn’t ‘fit’ them, mind you, it just ‘suits’ them. Meaning, people want to believe that their accomplishments are what fund society, and that others’ failures are to blame for us getting held back. The illusion that Federal taxes fund federal spending not only seems to fulfill that scenario in their minds, but it also covers over the crimes of those who would usurp our sovereign spending power, and actually hold us back.

It conveniently blames someone else for the crimes of the 1%.

…And inconveniently, so does Bernie Sanders. But thankfully for us, the similarity ends there. The truth about our monetary sovereignty is kept from us in order to take advantage of us, but Bernie Sanders just has to work within that environment until he can gain a foothold. As much as we hate that fact, it remains.

And here’s another harsh reality: The extent to which Bernie Sanders has to talk about taxes paying for progressive programs is the extent to which we have failed to convey our message of MMT. We have failed to make the subject common knowledge enough to reach a tipping point that might register in a voting database, so Bernie Sanders has no choice but to work within that environment.

But one thing you can bet, Bernie Sanders simply would not employ Stephanie Kelton, a major MMT thinker, and innovator as his economic advisor (again), if he did not understand MMT, and its ramifications for the people of the US. He simply cannot lay that truth on an unsuspecting audience while enemy factions lie in wait to poison it, and weaponize it against him. It would be a disaster for his campaign.

It’s up to US to change that, and we are well on our way. The fact that Modern Monetary Theory is being made mainstream is a double-edged sword as one might expect, but the other side of it is that in spite of slanted representation in mainstream media, people are becoming familiar with important terms and ideas inherent in the field.

That likely would never have happened without the work of real progressives. If it had, its impact would have been considerably lessened, falling mostly on uneducated ears.

The takeaway is this: Though we have come far, and accomplished much, we have far to go, and much more to do before Bernie Sanders can talk about MMT with the same freedom and voracity that he talks about the other forms of corruption in our government. The only difference between them is the extent of public awareness. Everyone knows that the government is corrupt, not everyone knows that covering over the truth of MMT is one of the main mechanisms employed to perpetrate and perpetuate this corruption.

We need to continue trying to change that!