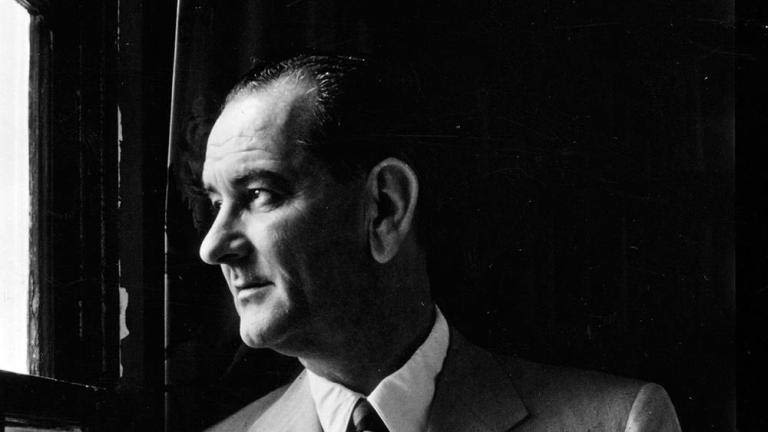 The Democratic senator from the great state of Texas was a heavy hitter in the Republican-controlled Congress during the earlier years of the Eisenhower Administration.

He understood, better than most in his party, how the alchemy inherent to the “Southern Strategy,” the very transmutation and seamless amalgamation of religion and Republican politics, was spreading across the bible belt. With this threat to his party foremost in his mind, Lyndon Baines Johnson would  shepherd his amendment to the tax code through Congress.

In that same year, 1956, the words “under God” were added to the Pledge of Allegiance; and two years prior, the eternal motto “E Pluribus Unum” (out of many, one) in effect since 1776, would be replaced with “IN GOD WE TRUST” (in all caps) on our paper currency, on certain coinage, and on official placards and seals.

Under the conditions of the eponymous Johnson Amendment, religious institutions were granted tax-exempt status, inherent to 501c(3) organizations. This was to be contingent upon the immediate cessation of all political proselytizing associated with the church.

Inexplicably, however, no enforcement mechanism was ever incorporated. In its absence and absence of will, no church would ever be investigated, ever be cited, or ever lose tax-exempt status.

Religious institutions would continue to incubate monolithic voting blocs dedicated to keeping the Republican Party in power. The windfall afforded from such tax relief would be used to build mega-churches, launch media empires, turn backwater preachers into gold-plated evangelists, and lobby the government to weaken, with the intent to dissolve, the firewall between church and state.

In July of 2017, Donald Trump addressed the faithful over the airwaves from Pat Robinson’s network studio to rail against a type of religious persecution that never existed, and ultimately to condemn the Johnson Amendment, which he declared was in gross violation of religious free speech. In doing so, he claimed to have repealed the amendment, which came as a surprise to constitutional scholars — who understood, to the contrary, that only Congress could repeal such an amendment to the tax code. Even though Congress had not done so, Trump would double down, further claiming to have instructed pertinent agencies to ignore issues of noncompliance.

Had he repealed it, as he implied, the revocation of the tax-exempt status, formerly granted under the conditions of the Johnson Amendment, would have canceled any issues of noncompliance as a consequence. There would have been a firestorm over just the thought of such a reversal, and the unleashing of the apocalypse, had it been considered.

Every organization that operates under a 501c(3) exemption must comply with the conditions imposed or risk having it revoked; it’s a common contractual agreement that the author of “The Art of the Deal” should understand.

Trump would again demonstrate the familiar tactic of distorting and inverting situations to his advantage under the umbrella of the Unitary Executive Theory, a theory which suggests that the powers afforded the executive under Article 2 of the constitution are subject to broad interpretation. This theory argues that a president, so motivated, could assume nearly dictatorial power within the executive branch of government. Vice President Cheney and his assumption of the role of de facto president would be a previous example of this theory put into practice.

Trump is aggressively pushing the envelope of the Unitary Executive theory; but should he push it too far — and should he go too far for even for his most ardent Republican supporters in Congress and Vice President Pence — he may find himself victim of his own hubris.

To the Democratic senator from the great state of Texas who became Vice President in the Kennedy Administration, who prematurely became the 36th president of the United State in the aftermath, who became so tormented by war and social inequality that he refused to run for a second  term, and whose amendment to the tax code inadvertently facilitated the rise of the Religious Right to perpetual power. To him I would say: Dear Sir, you have given solemn credence to that tried and true saying: the road to hell is paved with the best of intentions.