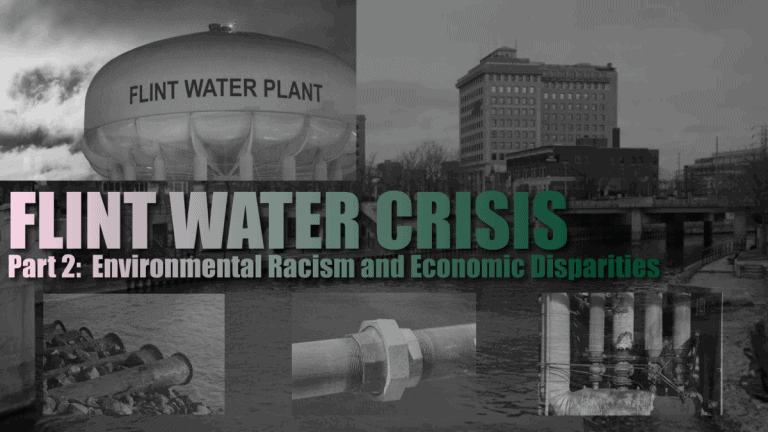 Flint Part 2, Environmental Racism and Economic Disparities: Could the Green New Deal Have Protected the Residents of Flint?

To understand what happened in Flint, Michigan we need to first have a basic understanding of what austerity and neoliberalism are and the role they play at all levels of government.

Austerity is a political-economic term referring to policies that seek to reduce the government budget deficits through spending cuts, tax increases, or a combination of both. The effect is a reduction in the standard of living for the people.

Neoliberalism is a more contemporary term that refers to market-oriented reform policies and focuses on reducing state influence in the economy, especially through privatization and austerity. More specifically, this is achieved by eliminating price controls, deregulating the capital markets, and lowering trade barriers.

In Part 1, we examined what happened in Flint and the state government measures that highly impacted the residents of Flint. We continue now with Part 2.

Another significant aspect of what happened in Flint is a deep racial and economic disparity combined with government corruption and incompetence. Environmental racism played a vital role in the crisis. If such a thing had happened in a predominantly white and affluent community, the state would have rushed in to help at the first sign of trouble. This was not the case in Flint. The water system was switched over in April of 2014, and the local and state governments, including social services, the EPA, and even the national media were very slow to react and routinely dismissed the genuine complaints of the mostly black, poverty-stricken residents of Flint.

It wasn’t until about October of 2015 that the state government took action. This was only after independent testing for lead indicated high levels and Del Toral, a “renegade” EPA agent, pushed for more testing (despite little concern from his superiors). In October 2015, a full year and a half later, action was finally being taken by the local and state government and the national media was finally willing to listen.

In the past, Flint, like most state and municipal governments, had made cutbacks in times of financial distress. Cutting services like garbage collection, police, and fire protection always brings a backlash from the voting public – something that normally creates some reversals. The creation of emergency managers removed that leverage – and any semblance of democracy – from the people of Flint. By empowering an unelected local official with virtually unchecked local power, the state stripped residents of much influence over their elected representatives.

Residents of Flint had repeatedly asked Republican Governor Rick Snyder for help (he was responsible for making dramatic cuts in the state’s budget and for signing Public Act 4, as discussed in Part 1). The residents’ complaints were dismissed by Snyder, who called the federal Lead and Copper Rule “dumb and dangerous.”

The plan of action in October of 2015 was to provide the residents with $1 million worth of home water filters, offer free water testing, and treat the system with anti-corrosives. This plan upset the community because it included no intention to switch Flint off river water. A week after national media became heavily involved in the story, Snyder announced Flint would be switching back to the Detroit water system. Any momentary relief citizens felt was hampered by the discovery that three of the city’s schools had also tested high for lead.

It’s been concluded that Snyder’s Department of Environmental Quality (MDEQ) failed to ensure the safety of drinking water and enforce drinking water regulations. Snyder’s Department of Health and Human Services failed in that they didn’t adequately and promptly act to protect public health. It was found that both agencies, mainly the MDEQ, worked to discredit and dismiss others’ attempts to expose the issues of unsafe water, lead contamination, and increased cases of Legionnaire’s disease.

With the release of inter-governmental emails, it became clear that Snyder’s inner circle was well aware very early on that something was wrong with the water in Flint after they made the switch. After GM stopped using Flint water because it was causing rust and corrosion to car parts, a senior policy advisor wrote in an email that getting back to Detroit’s water was an urgent matter. She went on to say that “comments about being lab rats in the media” were going to get worse as more bad reports of water quality came out. Snyder’s legal counsel agreed, writing back “The notion that I would be getting my drinking water from the Flint River is downright scary… My mom is a city resident. Nice to know she’s drinking water with elevated chlorine levels and fecal coliform… They should try to get back on the Detroit system as a stopgap ASAP before this thing gets too far out of control.”

The EPA also acted as an enabler to the state. Despite Miguel Del Toral’s red flag memo after discovering lead in one citizen’s drinking water, his superiors ultimately ignored him and left everything to the state and city. When the EPA finally did react, they left Del Toral out and expressed that they had enough information to take emergency action to protect human health in Flint. The EPA’s failure to act when Del Toral blew the whistle has prompted well-deserved criticism of their delayed response as well.

In one internal email from chief of state and tribal programs for region 5, voicing skepticism about offering Flint federal funds for water filtration, it was reportedly said: “I’m not so sure Flint is the community we want to go out on a limb for.”

By not “going out on a limb,” the EPA contributed to the lead poisoning and possible brain damage of 9,600 youth under six years of age in homes served by the Flint water system. It’s also been found that city and state officials clashed for 15 months without informing the public regarding the cases of Legionnaires’ disease in Flint at the time. Emails show that state officials were well aware of the spike in the number of Legionnaires’ disease cases at least ten months before informing the public.

Fires are burning in California, the Arctic, and the Amazon. An Indian city larger than Los Angeles has completely run out of water. Larger and larger storms are ravaging the globe. The climate crisis is the single biggest challenge to our food and water supply and the livelihood of the people on the planet. The best proposal we have at this time is the Green New Deal.

A Green New Deal encompasses more than just switching over to 100% renewable energy and net-zero greenhouse gas emissions; it also takes on big agribusiness and factory farms. This includes the WATER Act to rebuild our water infrastructure and contains a strong and just transition for workers in the fossil fuel industry. To sum it up, the Green New Deal encompasses renewable energy systems, electric transportation systems, city-regional networks, zero pollution, and recycling-based production systems. The Green New Deal would also include Medicare for All, a vastly expanded Social Security system, a Jobs Guarantee, and a comprehensive infrastructure bill.

Could the Green New Deal have protected the Flint Residents?

First, it is obvious that there was gross environmental racism happening in Flint early on when residents began complaining about their water. What is also obvious, however, is how this disaster in Flint might never have occurred (and certainly wouldn’t be continuing today) had the infrastructure been up to date. Many politicians mention the cost of repairing our outdated water systems, but often don’t look at the costs of doing nothing. Flint is an excellent example.

America’s infrastructure is in desperate need of repair and more funding. This current backlog of deferred maintenance did not happen overnight but is instead a culmination of decades of underinvestment. As we see in Flint, delaying these infrastructural improvements comes at a significant public cost. A key part of repairing infrastructure includes ensuring we have up-to-date underground waterways (piping) for safe drinking water, wastewater, and stormwater systems. In doing so, we need to focus on a long-term infrastructure package that takes into consideration efficiency and new technologies that would reduce emissions both in the building process and while in use. For example, the entire wastewater sector of the United States could reduce electricity-related emissions by nearly 40 percent just by upgrading to available technologies like high-efficiency optimal-speed pumps. The Green New Deal means taking full advantage of the latest technologies, funding additional research to produce more cost-efficient projects, and dramatically reducing emissions.

A Green New Deal could have heavy positive impacts on Flint. It would create environmentally safe jobs and practices, something Flint has very desperately needed for a long time. By creating environmental safeguards, a Green New Deal would not permit corporations like General Motors to use water sources like the Flint River as a dumping site again or allow authorities to wait a year before issuing water advisory warnings when a company has knowingly polluted the water. A Green New Deal means fixing the infrastructure so that Flint residents don’t have to question the safety of their drinking water anymore. Residential health would finally be a priority, and it would be an end to the austerity-driven cost-cutting measures that put people’s lives at risk.

So, in the words of young climate activist Greta Thunberg:

This is all wrong. I shouldn’t be up here. I should be back in school on the other side of the ocean. Yet, you all come to us young people for hope. How dare you! You have stolen my dreams and my childhood with your empty words. And yet, I’m one of the lucky ones! People are suffering! People are dying! Entire ecosystems are collapsing! We are in the beginning of a mass extinction and all you can talk about is the money and the fairy tales of eternal economic growth! How dare you!

For more than 30 years the science has been crystal clear. How dare you continue to look away and come here saying that you are doing enough when the politics and solutions needed are still nowhere in sight. You say you hear us and that you understand the urgency but no matter how sad and angry I am, I do not want to believe that. Because if you really understood the situation and still kept on failing to act then you would be evil and that I refuse to believe.

Are we evil? Or has the wool been pulled so far over our eyes that we go along with the veiled austerity and neoliberalism of our corporatist government, believing it will save us?