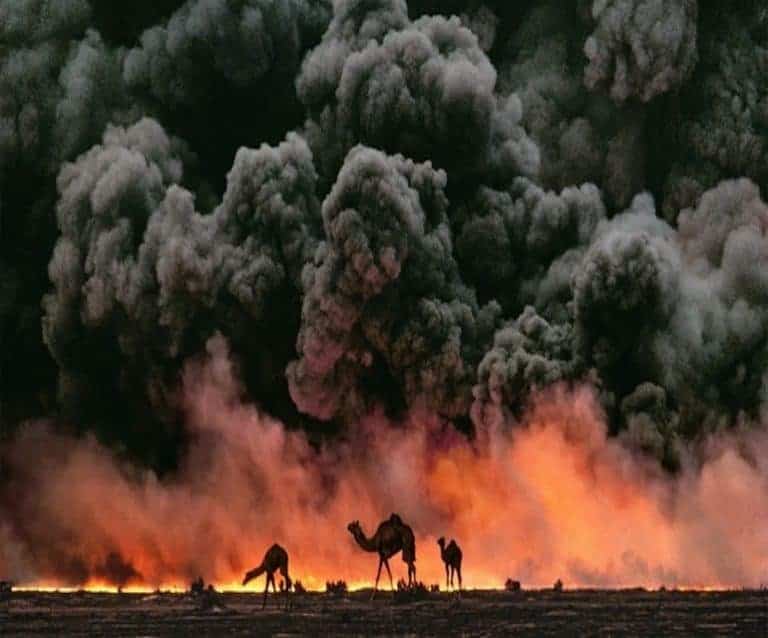 Of Lies And Deceit

Of Lies and Deceit

There were two military offensives against Iraq: “Desert Storm” (1990) and “Shock and Awe” (2003). Many have forgotten the first which was upstaged by the artifice of the second — 13 years later.

Both were manufactured events.

Two years before the commencement of Desert Storm, almost to the day, the 8-year bloodbath known as the Iran-Iraq War (1980-1988) ended in a stalemate. Iraq had vastly underestimated Iran’s military fortitude and the US and other Western powers saw an opportunity to become involved in the regional affairs by providing logistics and training in the use of chemical weapons.

“The enemy of my enemy is my friend” was more than applicable to this alliance and some of the West’s expired inventory of battlefield agents would find a convenient disposal site on the desert battlefield.

Still fresh in the minds of Reagan neocons – who carried on into the first Bush Administration – was the Khomeini insurgency that overthrew and exiled the Shah of Iran and which inspired the hostage-taking at the US embassy in Tehran (1978).

In the polarized geopolitics of the Cold War, the Soviets always had strong interests in the affairs of neighboring states such as Iran and Iraq, as did the US. However, their 10-year ordeal – attempting to install a Soviet-style government in Afghanistan – would end in a disastrous defeat in terms of blood, treasure, and humiliation, to a historical indomitability. It was now manifesting as the mujahideen and in its role as a well equipped and well trained proxy army for the US, it became all the more formidable in what would be the closing years of the Cold War.

As to the extent of US and western interests in these countries, the CIA had staged the 1953 coup in Iran that deposed Prime Minister Mohammad Mosaddegh — a highly educated and well respected, secular progressive and social reformer who would run afoul of US interests when he nationalized the oil industry. CIA operatives would reduce his presence to persona non grata and the remaining years of his once-distinguished life were spent within the confines of an Iranian prison cell. That same year, the figurehead King of Iran since 1941, Mohammad Reza Pahlavi, would fill the vacancy as a puppet of the US and be referred to as the Shah of Iran. He was able to continue his life of exorbitant luxury, in exchange for reverting the nationalized oil industries back to private hands and suppressing any indignant nationalism or religious radicalism that could interfere with foreign access to Iranian oil.

Over the next 25 years, a simmering undercurrent of discontent – from both the secular left and the religious right – would boil over into the1978 Iranian Revolution led by the Ayatollah Khomeini. The Shah would be deposed, American embassy personnel would be taken hostage, and the radical fundamentalist theocracy that Khomeini installed would become increasingly antithetical toward both superpowers and its neighbor, Iraq.

Saddam Hussein would assume the presidency in Iraq only months after the Iranian Revolution, in July of 1979, from within the Ba’ath party that he had been so instrumental in bringing to power as a result of a coup in 1968. During the 1970s, as vice president, he nationalized the banks and oil companies and used the revenue to build up internal security and upgrade the national infrastructure — raising the standard of living for the average Iraqi to the highest in the Arab world. Medical and educational institutions became the envy of the region and many students, teachers, technicians, doctors and patients came to Iraq to avail themselves of such services and opportunities. Compared to other Arab states, especially its newly radicalized, revolutionary neighbor Iran, Iraq was not a theocracy, and Iraqi women were far less restricted and constrained by the tenets of Muslim orthodoxy. They were allowed the freedom to pursue advanced academic degrees and to assume respected positions in the economy and government. Even with the prolonged war with Iran taking a toll on his ability to maintain the standard of living at its full potential, it would be a fateful decision that would lead to the complete destruction of everything he had built over two decades, in just a matter of hours, days, and weeks.

Along the border with Iran, there was the Iranian Revolution, and the effects of a highly radicalized theocracy spilling over it, to contend with. Along the border with Kuwait, Kuwaiti oil companies had begun slant-drilling deep into Iraqi oil fields. Hussein’s demands to halt such operations were ignored. The US was well aware of this situation since it was a Texas-based, oil drilling supply company, Halliburton, that had sold Kuwait this newly developed, state of the art, horizontal drilling technology (now ubiquitous to the fracking industry), effectively encouraging Kuwait to engage in such transgressions.

The year before Desert Storm, George Bush Sr. had appointed Dick Cheney (neocon) as his Secretary of Defense. It should be noted that Cheney was formerly the CEO of Halliburton.

The week before commencement of hostilities, the US ambassador to Iraq, April Glaspie, conveyed the following message to Saddam Hussein:

“We have no opinion on your Arab-Arab conflicts, such as your dispute with Kuwait. Secretary Baker has directed me to emphasize the instruction, first given to Iraq in the 1960s, that the Kuwait issue is not associated with America.”

Secretary of State James Baker (neocon) who once threatened to annihilate Iraq with nuclear weapons had given Hussein carte blanche to settle his affairs with Kuwait, and with that deliberate deception, the entrapment scheme was set. Desert Storm was ready to be deployed whenever Hussein’s troops took the bait and crossed the border and when the Kuwaiti ambassador’s daughter would fabricate her emotionally wrought account of Iraqi soldiers throwing babies from incubators for the sympathy and the blessing of the American people.

The roots of what would come to be labeled neoconservatism trace back to the 1950s. It was originally used by the left to describe the tendencies of hawkish democrats, but ultimately, it came to describe hawkish conservatives who championed strong military interventionism to displace socialism and impose democratic and capitalist values. It would emerge as a coherent force in the Reagan administration. All the machinations that would transpire throughout his scandalous presidency can be traced to neocon operatives and ideologues. It was their plan to sell advanced rocket launchers to Iran to illegally fund the Contras to take down the socialist president Daniel Ortega. It was their plan to provide chemical weapons to Iraq during the Iran-Iraq War. It was their plan to weaken the Soviet Union by supporting, training, and arming the Mujahideen (Bin Laden) with deadly Stinger missiles in Afghanistan. It was also their plan to unleashed the most powerful and sophisticated military offensive the world had ever seen against Iraq, after having supported Iraq against Iran.

It is common knowledge that those in the Bush Administration perpetrated the lie that Iraq had weapons of mass destruction (WMD) to provoke the second Gulf War and that Halliburton was again used to provide primary support and logistics â and yet, the egregious perpetrators in both Bush administrations never had reason to fear a war crimes tribunal. In his role as an accomplice, the British prime minister, Tony Blair, had more reason to be concerned. In the UK in 2009, the Chilcot Report, an exhaustive investigation into the legitimacy of the war grew to contain nearly 3 million words, spanning 12 volumes, before its eventual release in 2016. It was not kind to Blair, nor to his involvement of the British military in the name of the British State. The report concluded it was an unjustified war, predicated on thinly corroborated evidence and completely lacking in constructive postwar vision and planning. It blamed him for the nearly 400 dead British soldiers and for those who returned damaged and disabled — not to mention the hundreds of thousands (perhaps a million or more ) in Iraq who were killed, traumatized, and displaced during the war and the survivors who were left to fend for themselves in the chaos, devastation, and deprivation, much of which still exists to this very day. In 2017, a private prosecution with subsequent appeals was brought by a high ranking Iraqi general, accusing Tony Blair of participation in an illegitimate war and complicity in war crimes against his nation and its people. The accusations were characterized in terms of a â œwar of aggressionâ and the relevancy in such a context would elevate to the high court. The letter of the law would ultimately come to supersede the spirit and the motion was dismissed in the absence of the words appearing in British law journals verbatim. Previously, in 2007, an acclaimed BBC drama fictionalized the war crimes prosecution of the Prime Minister in â œThe Trial of Tony Blairâ ; and as late as July 2019 Jeremy Corbyn, head of the Labor Party, was still calling for an investigation into Blair’s complicity in war crimes.

Dick Cheney held prominent positions before, during, and after both wars, as Secretary of Defence in the first Bush administration and as the most powerful vice president and neocon in American history in the second. And everywhere that Cheney went, his Halliburton was sure to go.