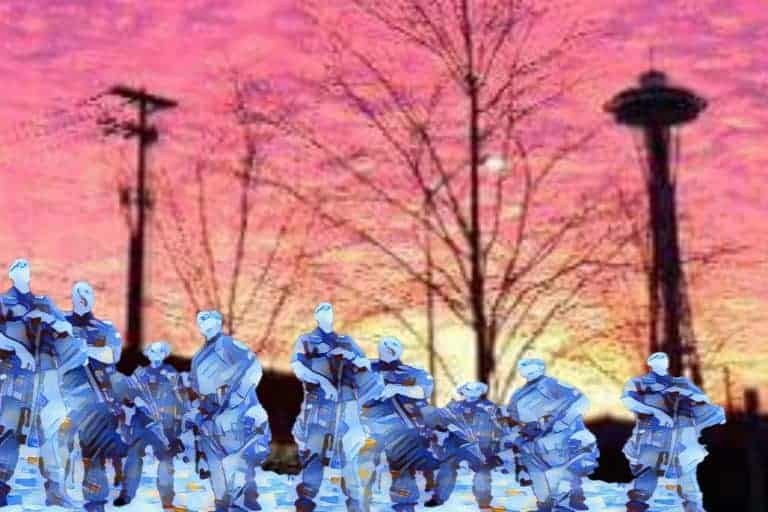 If you ask someone inside or out of Washington, theyd probably tell you Seattle is a very progressive city. Or perhaps, if they were of a more right-wing persuasion, theyd say derisively that its full of lefties.

If you dont think were so progressive, we have a long list to prove it:

It would seem we have enough liberal cred to enjoy our coffee, beer, and weed in peace. However, if your eyes remain open amid all this left-wing glory, a different story emerges once the caffeine, alcohol, and reefer wear off. We have a history of racism and inhumanity as bad as anywhere else in the country. Dont believe it? This article from KUOW is a good place to start.

If you dont have the time to read another article, the news story tells how severely Seattle was red-lined to prevent Black Americans from integrating. It also explains how the pollution from affluent Lake Washington was relocated to the Duwamish River. In our city, housing was not open and integrated until 1968. That year the city of Seattle decided to pass open housing hoping to avert riots in the wake of Martin Luther King Jr.s assassination. Even after 1968, banks systematically refused home loans to black and brown families seeking to move here. Our city has so much more oppression and sadness in its history but for now, lets return to the present day.

Seattles current “liberal” mayor, Jenny Durkin, is a microcosm of the failures of the Obama administration in which she previously served. She works on the homeless problem in Seattle with sweeps which are actually violent seizures of property by law enforcement authorities who come into homeless living spaces to take and destroy all of their possessions, including clothes, sleeping bags, essential documents, medications, and tents.

Another article reports there is a movement against these inhumane sweeps. Its hopeful to see resistance to the sweeps. There are many ways we Seattleites struggle against injustice. Many of us now see it starkly; the privileged elite against black and brown people, against the poor and homeless, and against protesters trying to create a system that works for everyone.

Nothing exemplifies the differences between those with privilege and those without than how marginalized members of the community are treated by police.

When it comes to law enforcement, the police of the Pacific Northwest lack humanity. As much as we’d like to see it, there is in fact no liberality in their ranks. You can see the problem by first looking at a few well-known cases, or just by reviewing the numbers. As reported in the Seattle PI, in 2010 the Seattle police killed Native American carver John T. Williams as he walked down the street. In another egregious example from 2017, the police killed a black woman, Charleena Lyles, who had called 911 for help. In both of these cases, the officers were cleared of charges or indemnified. As the cases now stand, they will not face jail time, a criminal record, or other legal retribution.

Since 2012 the Seattle Police Department have been under a Consent Decree from the Department of Justice, for allowing racial profiling and using excessive force. This essentially means that our police were so unaccountable that even the DOJ found them to be practicing unconstitutional policing. After all this time, those aforementioned murders and recent brutal arrests show that the SPD have failed to reform even in the slightest to fulfill federal requirements against brutality and racist profiling.

On Friday, December 20, 2019, Jonathon Spencer Daling, a young black man, father, and aspiring rapper was at the airport waiting for his sister. They were to fly together to South Carolina. While he was waiting at Seatac Airport he fell asleep in a chair. Jonathon awoke to a group of police who came straight up to him and asked him for a passport. They reportedly ignored the white person sleeping nearby on the floor. Jonathon tried telling them he only had an I.D. and was picking up a ticket that was purchased for him. On the day after the incident, his mother, Betsi Daling, spoke on his behalf while he was in the hospital being treated for his injuries. Betsi said her son didn’t have a chance. His crime was “traveling while black”.

The police proceeded to put him in a chokehold, put partitions around him to obstruct a clear view of what was happening, then started attacking him as he screamed out for help. Betsi has asked her son if anyone else saw this and he told her that he kept asking people to please film while they were attacking him. Jonathon thought he was going to die. Betsi said, “He’s scared to death. I talked to him finally this morning and he kept saying ‘mom they were trying to kill me’ and that tears my heart up.” She added that they beat him so badly he had to go to the hospital.

Jonathan was charged with criminal trespass with a $1,000 fine and resisting arrest with a $500 fine. Its worthwhile to note that a passport is not required to fly domestically in the United States, although that will change in 2020. The family expects to file a complaint with Port of Seattle Commission, contact the ACLU, and take legal action.

I was able to speak with Jonathon who called from the King County Jail. He told me he thought he was going to die as he described his horrific ordeal. As two officers held him in a chokehold he was tased by two different tasers, one in his ribs and one in his back. He was also kneed in the ribs and punched in the face. Four different officers surrounded them while the others attacked.

He said this attack went on for five minutes until he had a seizure at the airport, and then another when they were booking him. He doesn’t remember much after the tazing. After the second seizure, Jonathon was taken to Harborview Medical Center. He only remembers the paramedics. In spite of events of the day Jonathon was remarkably kind and polite. He thanked me for talking to him from the county jail where he was being held, away from his family as the holidays approached.

Another example of police brutality occurred almost two weeks earlier, on December 7th, against counter-protesters standing up to white nationalists at Westlake. Luckily, video of the brutal beatdown is publically available on Twitter. On the video you can see the police go after a protester with no provocation. It really is fortunate that there is a video record and that many people were around to provide some sort of accountability. Although the counter-protestors were injured, thankfully none were beaten as brutally as Jonathan Daling. This is doubtless because the police were held in check by the many witnesses at Westlake.

A group called Demand Utopia-Seattle partook in the counter-protest and one of their members was arrested. In response to the brutal and arbitrary arrest of their one of their own, as well as other incidents, the Demand Utopia-Seattle organization has written the list of demands below. They have also called on other groups to echo the demands, add their own demands, and to stand in solidarity against all police brutality.

The demands of Demand Utopia-Seattle can be found on their twitter page:

In response to the incident on 12/7/19 involving the Seattle Police Departments unprovoked use of excessive force against protesters who were standing in opposition to white nationalists we are demanding the following:

The narrative we are taught as schoolchildren — that police are our friends — is simply not true for most of the population. It’s only true for certain demographics. If you are well-dressed, well-paid and carrying a Macy’s shopping bag you do not need to worry. If you are a middle-aged white man driving down 5th Avenue you do not have to worry. But if you fall asleep at the airport while being Black youd better keep an eye open. If you are Black, Hispanic or Indigenous while walking down the street, you are part of a different narrative. If you are protesting on the side of the less privileged, the police will attack you for no reason.

If we are to discard this narrative of the police as friendly caretakers, what will replace it? This quote from Puget Sound Anarchists sums it up nicely:

The police by the fundamental nature of their institution are violent. Their duty is to uphold order with force. Historically and in the contemporary they uphold the rule of private property over the needs of people and serve as the shock troops for some amalgamation of ableist-cis-white-hetero-patriarchy. They of course shift their tactics and PR given the situation, but they remain as enforcers of ghettoization, poverty, class society, etc. They have not strayed far from their origins in this country as slave catchers and mass-killers. Coerced unpaid labor itself hasnt even been abolished for those criminalized by the justice system and the police continue to lock more and more poor people up forcing many of them to work under threat of violence for little to no pay.

If that narrative strikes you as biased coming from an anarchist publication, even the writers at Snopes agree on the origins of police. The writer of the Snopes piece ended with a weak assertion about how police have changed since their origins as slave catchers, strike busters, mass murderers, and ethnic cleansers. However, evidence to show us how police have changed was notably missing.

Here in Washington state, if you are poor, homeless, brown, black, or a protester, you will experience the dark side of the area’s law enforcement. Its clear that these police feel free to brutalize with impunity anyone they think of as the other — anyone they feel does not deserve consideration. The police have guns, pepper spray, and tasers while average citizens often do not, and would not be protected by the law for using them as a defense against police brutality.

As things stand, do not expect justice if you are brown, black, poor, homeless, or protesting the exploitative unjust system. Expect police brutality. You will be beaten while sitting. You will be shot while walking down the street. You will be tased while in a chokehold. You will be pepper-sprayed while exercising your 1st Amendment right to assemble peacefully.?Ã

All of Seattle must wake up to the two different worlds that exist in practice. The facts in front of our eyes are more important than the comfortable narratives we have in our minds. The actual experiences of people are not the prevailing story in Seattle, the liberal heaven, but they should be. We should not have two sets of rules: a brutal truth for marginalized members of the community or those who stand in solidarity with them, and yet another set for the rich, the privileged, and the friends of the powerful.

Ruth Oskolkoff is a Seattle progressive activist and a member of Extinction Rebellion and the Democratic Socialists of America. She has written two books of poetry, two childrens books, and edited a book of progressive quotes called “Capitalism Must Be Composted.” Ruth is currently writing a novel set in a future Seattle after a Socialist revolutionto be available in early 2020.