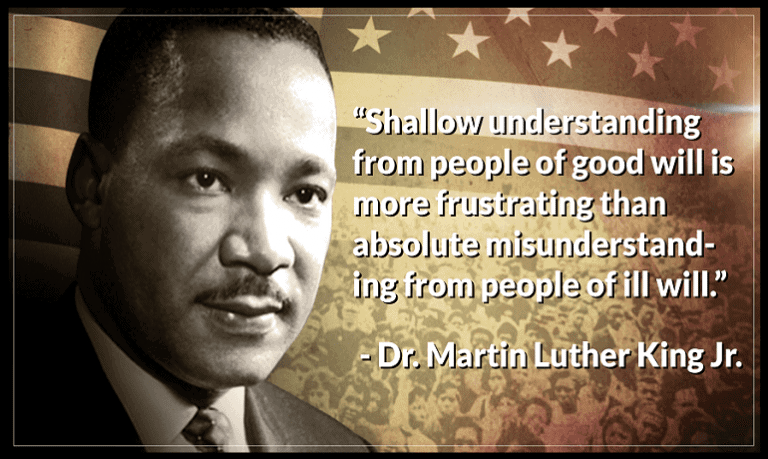 Alas, Black History Month is here again. Many people will celebrate Dr. Martin Luther King, Jr’s life and his many accomplishments, from marching on Selma to pushing Congress to pass civil rights legislation. There are just two colossal issues: we don’t really recognize the economic movement that Dr. King tried to establish nor do we pay enough attention to his prophetic words on the dangers of centrism.

Just before Dr. King was killed, he was working on uniting sanitation workers in Memphis to strike against poor pay, horrible working conditions and the ability to collective bargain. He recognized how vital economic justice and equity were to receiving true equality for minorities. Without economic justice, minorities have no real avenue to ensure that they have the same opportunities as white America.

Dr. King also recognized that minorities were not the only oppressed group. In fact, minorities, women, and the poor are all groups that are neglected when it comes to economics, politics, and the legal system. Understanding this, Dr. King and the NAACP established the Poor People’s Campaign in 1968. He and others were seeking jobs, unemployment insurance, and better educational opportunities. Because of his assassination and other factors, the original Campaign was unable to achieve all of the goals it had set; however, the new Poor People’s Campaign is still fighting for economic justice for all that need it.

“We must rally around a transformative agenda that can lift up entire generations…What this will require is nothing less than a long-term movement that is able to develop irrefutable and independent power among the poor.” @liztheo #PoorPeoplesCampaign https://t.co/81tRScMhXk

Dr. King understood that the fight for equality would have many detractors. From Dixiecrats to the KKK and other white supremacy groups, he knew the fight would be difficult. However, he identified one particular group as the biggest threat to progress: the white moderate.

“I must make two honest confessions to you, my Christian and Jewish brothers. First, I must confess that over the past few years I have been gravely disappointed with the white moderate. I have almost reached the regrettable conclusion that the Negro’s great stumbling block in his stride toward freedom is not the White Citizen’s Counciler or the Ku Klux Klanner, but the white moderate, who is more devoted to “order” than to justice; who prefers a negative peace which is the absence of tension to a positive peace which is the presence of justice; who constantly says: “I agree with you in the goal you seek, but I cannot agree with your methods of direct action”; who paternalistically believes he can set the timetable for another man’s freedom; who lives by a mythical concept of time and who constantly advises the Negro to wait for a “more convenient season.” Shallow understanding from people of good will is more frustrating than absolute misunderstanding from people of ill will. Lukewarm acceptance is much more bewildering than outright rejection.”

He knew that white moderates/centrists cared more about appearances than policy changes to help others. Even today, we see the dangers of centrism as it led to the rapid rise of proto-fascist Donald Trump.

If Dr. King were alive, what would he be fighting for now? I believe he would fight for a federal jobs guarantee, Medicare for All, and a Green New Deal. These policy prescriptions help to reduce inequality, both economically and environmentally. As we look to celebrate his life this month, let’s honor him by fighting for what he truly believed in.