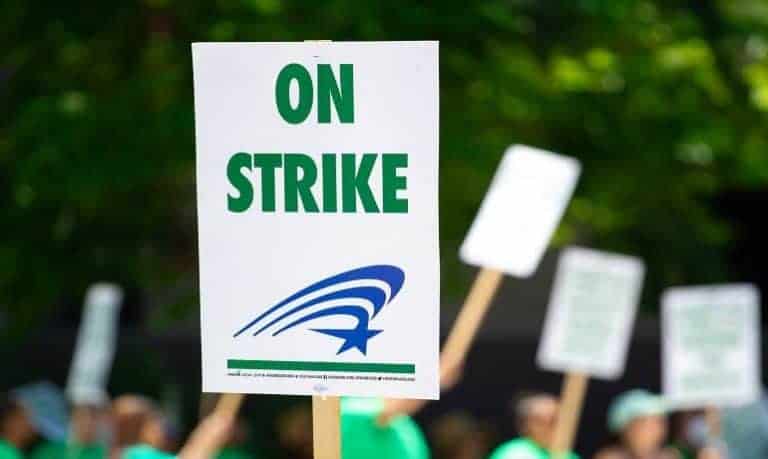 The Need For a General Strike in the US

In the midst of the 2020 election, many liberals, leftists, and independents are wary of the election and for excellent reasons. The Democratic Party has left the citizens behind and chosen corporate interests over the people. Not only that, but Americans are seeing their elections rigged by Democrats. Many Democrats would rather have a neoliberal instead of someone who is for the people because it protects the status quo. We saw this with the 2016 election where the DNC screwed over Senator Bernie Sanders and virtually delivered the election to Hillary Clinton. The American people were in favor of the Senator. However, the superdelegates were in favor of Clinton, and she got away with the nomination. The mainstream media pushes pro-establishment candidates over people that are not in their personal bubble. CNN and MSNBC have blacked out candidates like Bernie Sanders, Andrew Yang, and Tulsi Gabbard. Noting all of these biases, it’s clear that electing officials to represent us isn’t enough. We need much more than having political figures fighting for us. We need a general strike.

Citizens have been marching for their rights all over the world. Recently, France has been striking against the policies of its president Emmanuel Macron. Macron once seemed like a candidate that was for the people, almost like Barack Obama had seemed in the United States. However, like Obama, Macron was a tool for the establishment in France. He went into office eliminating taxes for the wealthy and taxing many working families in the process. The Yellow Vest Movement in France began when the government decided to levy a gas tax. This led many to finally snap and take to the streets. Because of this, the people of France were not only able to get rid of the gas tax, they gained a minimum wage increase as well. It proves that general strikes like France’s Yellow Vest movement are the best way to go. This is how to force action on programs that the majority of the American people want. Even if the government is bought and paid for, they will cave if pressured by the citizens. Without a mass movement, we won’t succeed. Hence we need a general strike.

As we address the issue of corruption in the United States as well as in many other governments, we must communicate this message to the people and help motivate them to take to the streets. The issue that we have in our society is that our mainstream media is bought and paid for. As stated before, putting elected representatives in our system is not enough. We need to be able to move the people – nonvoters and voters alike – and also motivate them to fight with us. To do this, we need to avoid using labels when we talk about policy. Some people will disagree with me on this. However, it’s important to bring up because most people don’t know what labels are. We need to be able to debunk the idea that the system cannot be fixed. We need to debunk the mainstream media’s smears against policies that are going to fundamentally help American citizens. We also need to talk about Modern Monetary Theory: the road to show people “how we pay for these policies” and what MMT ultimately does. To do this, we need to exercise our right to speak and our right to protest.

If we have a voice, we need to urge and use our freedom of speech to apply political pressure. We need to be ready to call out Democrats on the issues that we fight for. We can no longer allow Joe Manchin types to slip by us solely because they have a D next to their name. There’s no more bowing to Republicans on military budget increases, tax cuts for the rich, and rotten trade deals. The American people need to start holding their representatives accountable for their actions, Democrat and Republican alike. If we don’t use our voices, our voices will eventually be silenced.

With Julian Assange and Chelsea Manning being thrown in jail for exposing crimes, it’s vitally important that we make ourselves heard. However, words alone will only do so much, which is why our movement is about taking action.

Issues of censorship on the internet have also become a problem. The reason so many of us are able to learn what’s actually going on in our country is through the power of independent media. Independent media is not beholden to corporate owners the way mainstream media is. If a media platform is truly independent, it will show us issues that the mainstream media refuses to cover. Because of this, it’s vastly important to fight against these attacks on our free speech. If we do not use our voice, we will have nothing and that’s when we truly lose.

Americans who are concerned about our future need to act. Defeating Donald Trump won’t solve our problems. We need someone to stand up to the establishment that owns most of the politics. “Vote Blue No Matter Who” is not the answer. Voting the lesser of two evils will not fix America. We need to understand and accept that some Democrats are not, and never will be, on our side.