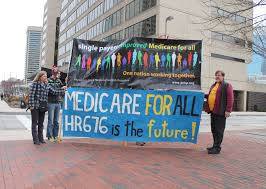 Medicare for All and Trans Equality

On March 1st, Pete Buttigieg ended his 2020 bid for the presidency. Throughout the campaign, much fanfare was made out of Buttigieg being an openly gay candidate. While it is undoubtedly important for gay candidates to run for political office, an important part of the narrative was left out.

Buttigieg has been vocal in his opposition to Medicare for All, Bernie Sanders’ signature policy proposal which would provide health care coverage to all Americans. This is especially important to the transgender community, a community that is not often discussed in politics but which stands to lose a lot if Donald Trump is re-elected and who would benefit greatly from Medicare for All.

Sanders’ Medicare for All plan would cover health care including transition care, which includes:

This is not an issue that is often addressed by Buttigeig or anyone else when discussing how to reform the American health care system. How often, for example, has a debate moderator asked how candidates propose addressing the needs of the transgender population? Never.

Yet this is a vitally important issue, especially considering the way the Trump administration has attacked transgender rights.

According to The National Center for Transgender Equality, one of the first things the Trump administration–specifically his Department of Labor–did was to propose exempting the TRICARE health care coverage program, which covers the dependents of military personnel, from being barred from discriminating against people based on sexual orientation or gender identity. This was of particular concern to transgender people because this policy might have stopped them from having their transition care covered by the TRICARE program.

In the past three years, the Trump administration has attempted over and over to propose policies that allow employers, doctors, schools, and others to discriminate against transgender people.

Most famously, the administration has banned transgender people from serving in the military, but this is only one of at least a dozen instances of anti-trans policies it has pursued.

There is only one candidate on the Democratic side who has explicitly addressed this with a concrete policy that would help transgender people as well as everyone else. That candidate is Bernie Sanders.

Sanders has been an advocate both for equal access to health care and LGBTQ+ equality for over 40 years, making him the favorite of 42 percent of the LGBTQ+ community. So it is unsurprising that his Medicare for All plan covers transgender health needs.

What is disappointing and frightening, however, is that nobody else is even mentioning it, not counting Elizabeth Warren sharing her personal pronouns on her Twitter page and former candidate Julian Castro mentioning transgender people being affected by the debate over abortion (though he got the genders wrong, saying that trans women rather than trans men can get pregnant.) Former NYC Mayor Michael Bloomberg is on record as calling transgender women “men in dresses” , something which no one has yet pushed back on.

Buttigieg’s opposition to Medicare for All explicitly harms transgender people. His “Medicare for All Who Want It” plan creates a public option for health care. While this may sound attractive on the surface, it in effect creates a two-tiered system in which the poorest of the poor are shuffled off to an underfunded, overworked public health care system that does not address their needs, while those who can afford it pay for better quality health care.

The poorest of the poor include many trans people. So in effect, this plan would interfere with trans people getting health care coverage for their transition needs and other health care needs.

Buttigieg was not the only one proposing such a plan, of course. Joe Biden and Amy Klobachur also support some sort of public option plan, and Elizabeth Warren doesn’t plan to move from a public option to Medicare for All until her third year in office. Buttigieg’s lack of support for the transgender community is doubly egregious since he is hailed as a hero by many in the LGBTQ community simply for running as a member of that community.

Sanders’ plan isn’t just for transgender people. He’s a universalist who believes that all people, regardless of their various identities, have the right to health care. His Medicare for All is the only plan that addresses the needs of transgender people in any substantial way.