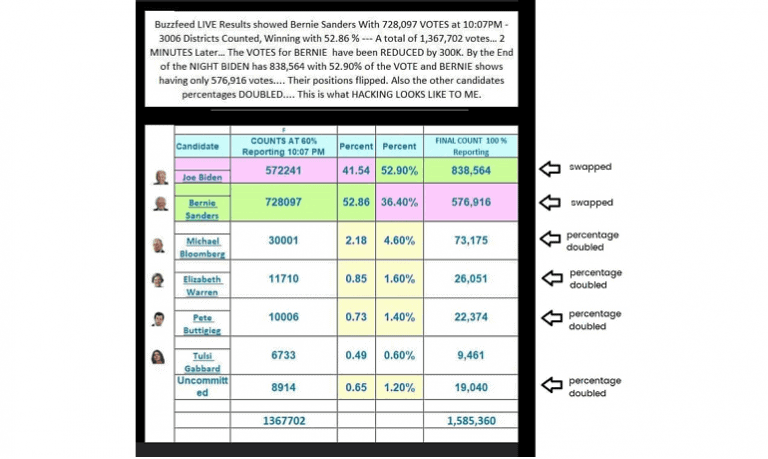 In 2016, I was a lead organizer for Metro Detroit Bernie and I was thrilled when I became a Sanders’ delegate. We organized parades, rallies, marches — we even created a gigantic 10′ processional puppet that was a tremendous hit and was taken by the campaign to travel to numerous states.

We saw first-hand as the momentum continued to build and the rest of the country felt the Bern. All of us were ecstatic! 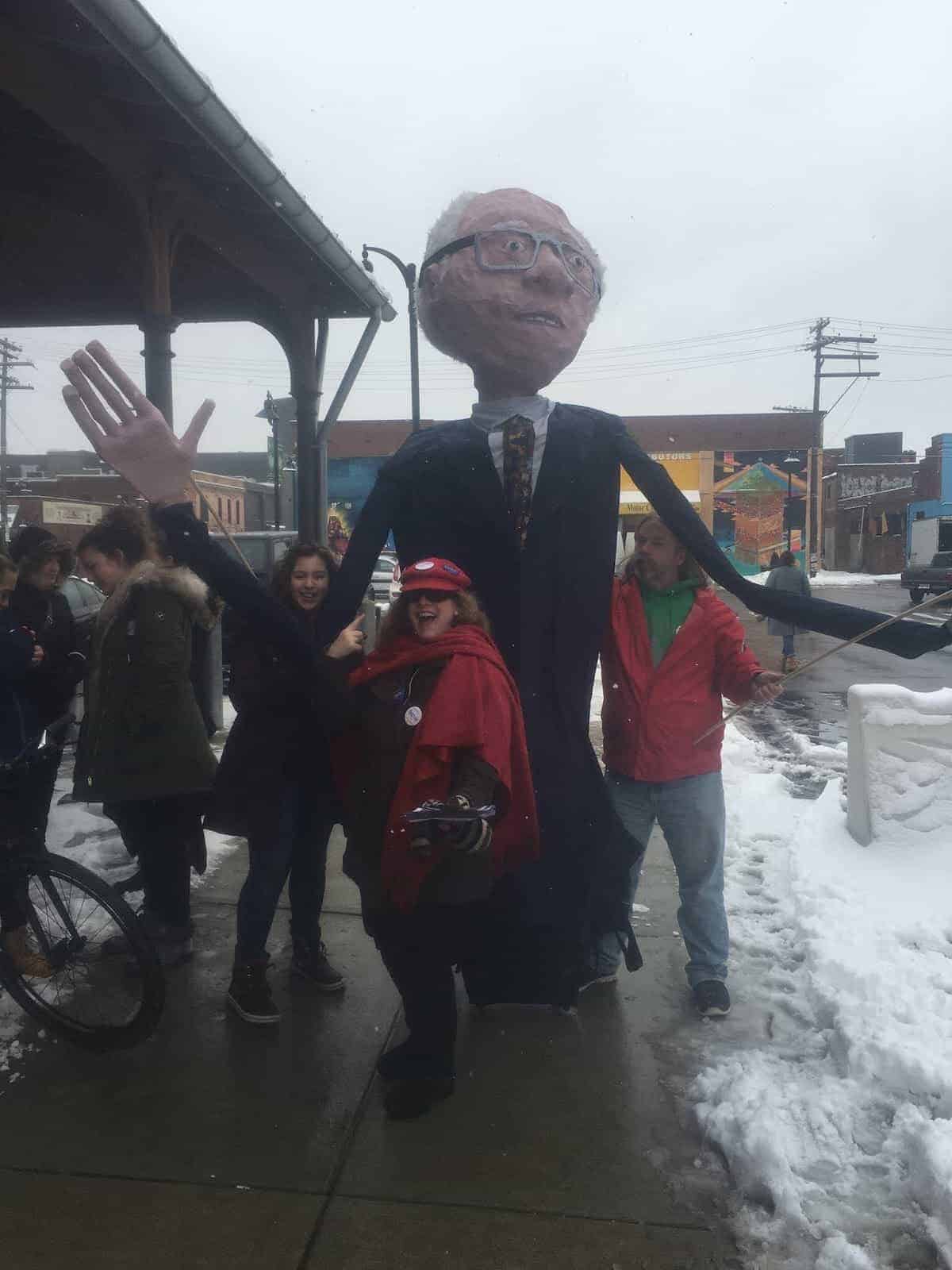 Then we started hearing rumors of rigging — of people being thrown off of voter rolls in strong pro-Sanders territories. At one point, the Sanders campaign was being denied VAN access (the voter information database that Democratic candidates use), making us angry and frustrated; we knew we were being suppressed.

Through all of this, we became even more determined that we would fight harder. Sanders had to WIN! Consequently, he began to win states Most significantly, after being down by 22 points in Michigan the morning of the 2016 primary, one of the most delegate-rich states in the race, he shockingly won in one of the biggest political upsets in recent history!

Shortly thereafter, he began to lose in states where we knew he was doing well. We sensed something was terribly amiss. We vented our frustrations by writing to all of the super-delegates, pleading with them to change their support to Sanders. WE knew Clinton would lose to Trump.

Still, we went to the convention riding high on Bernie fever! We covered the “Bernie mobile” in stickers and signs as six of us rode to Philly. Somehow, we never lost hope that we would be able to change the outcome of the convention. Then, at the convention, we heard the news that most of us had suspected.

My good friend Lenka Perron, also a delegate, invited election integrity researchers who had been posting about irregularities to come and meet with us delegates. They did, rather reluctantly; they were hesitant about releasing their information. We met at a local Italian restaurant across from the convention hall. There, they laid out the results of the voting machines. They told us that the results from the machines, in all large precincts, were 1 in 77 billion. Yes, you read that correctly — statistically impossible!

How could this be done? From what we were told, most voting machines have the capability to perform “fractional voting.” Put simply, that means that it has the ability to allow one candidate 1.1 (or whatever number they choose), and another one .9, etc. The program is untraceable and completes this task in about a minute. This was the only possible explanation for the discrepancy of Clinton’s numbers going higher, and Sanders’ numbers going lower, as more people voted. According to the law of averages, as more people vote, the numbers are supposed to level off — the opposite of what was happening. This was also supported by the exit polling discrepancies that exceeded the margin of error.

Based on this, it could be reasonable to conclude that the election was stolen — but what could be done? The election researchers gave four of us the ten-page summary of the 100-page report, to hand out to the countless reporters at the convention; we did so.

Who reported on it? From what we saw, only Lee Camp — independent journalist and host of RT’s Redacted Tonight. Did any mainstream media reporters? Absolutely not.

What could be done about it all? Nothing: this is the United States — the ones who make the rules are the ones who benefit from the rigging.

Fast forward to 2020. We know that the momentum is hugely in Sanders’ favor! We work our proverbial asses off once again and we are seeing tremendous results! Bernie becomes the favored candidate! We are riding high!

Yet once again, the establishment begins its shenanigans. After South Carolina, candidates quickly drop out and endorse Joe Biden, arguably, a worse candidate than Clinton. We know that they would rather have four more years of Trump than allow a Sanders win; he would end their corporate donations, and the establishment would lose their power.

However, we have hope, we see the rallies, we see the support, we feel the people’s pain and we believe that they understand how much Sanders’ policies will help heal this nation. We continue to knock on doors in Michigan and we feel extremely hopeful! People “get” it!

Then we see the polling numbers on the morning of the Michigan primary — Biden is ahead by about 30 points, but we do not believe them. We’ve seen the people, we’ve talked to the people, we’ve been to the rallies and felt the Bernie love; we KNOW that the polls are wrong!

We then work the polling stations in the morning. I do very informal exit polling and become quite encouraged! People are smarter than we give them credit for; they’re not buying the propaganda! The polls are wrong! I took literature to several sites to hand out to other supporters — and the stories are all the same: “Bernie’s doing GREAT!” I told people that, conservatively, I’d say at least 70% of the people are for Sanders. We hear the numbers coming out of Michigan: Bernie’s WINNING!

At the campaign results party at the Anchor Bar in downtown Detroit, we feel amazing! 12% of the results are in and Sanders is winning! Jenn Dize of Status Coup is about to interview me and tells me Sanders is ahead — awesome, let’s do this interview! Then, just before we begin, Jordan Chariton gives her an updated result — Biden’s winning. What?! Sanders was just ahead a minute ago! We know this can’t be true! The polls were filled with Sanders volunteers handing out literature at all the stations. Not ONE Biden supporter can be seen. We know that the people are with Bernie — none of it makes sense! We continue with the party, feeling deflated. 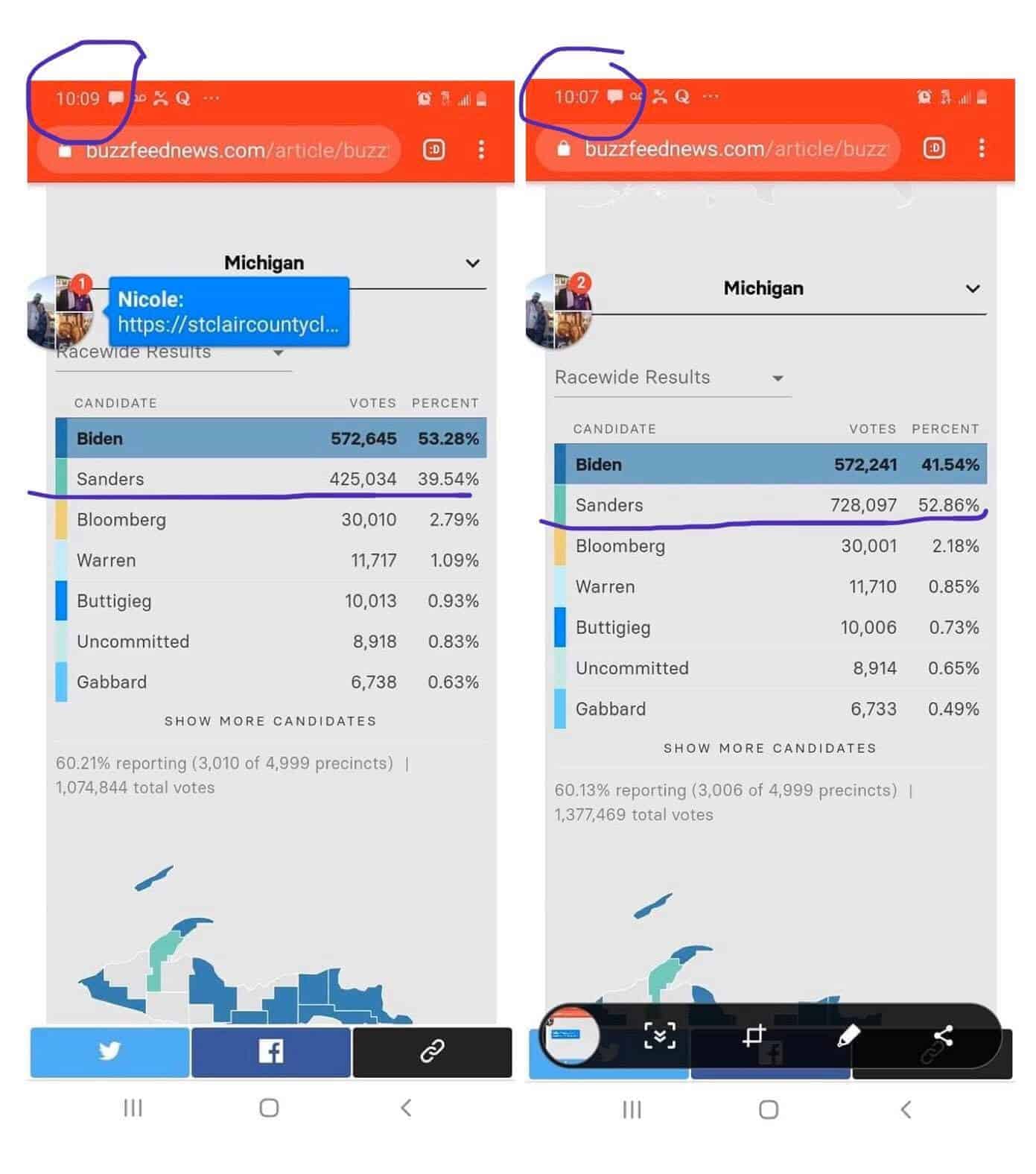 Sanders WON Michigan and it was stolen. The election is once again being taken from him…not HIM…US!

Tell me America, what do we do?