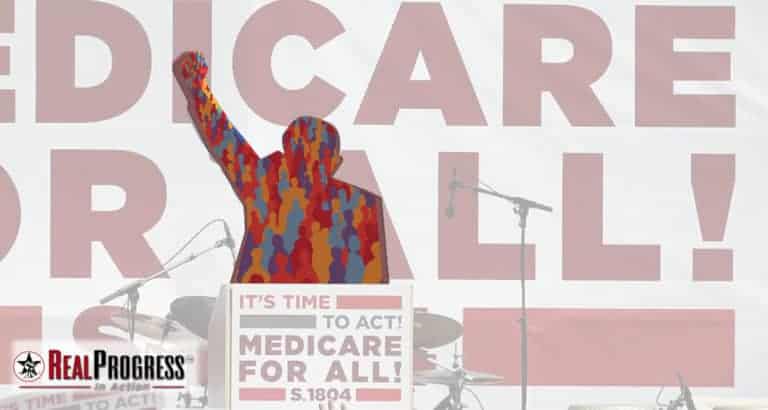 The Time for Medicare For All Is Now!

Share on facebook
Share on google
Share on twitter
Share on linkedin
Share on pinterest
Share on email
If anything has shown us that employer-based insurance has always been a terrible idea, it is the current Covid-19 pandemic we are dealing with today. Since April 1st, more than 30 million Americans have lost their jobs and any health insurance they may have had. Sure, Covid-19 testing is now being covered by the Trump administration, but the treatment? Not so much. And what about other illnesses and conditions? Medicare for All would cover it all.

There is a consistent belief held by our courts, reaffirmed through the Estelle v. Gamble Supreme Court ruling more than fifty years ago that people in prison have a constitutional right to adequate health care. In July 1798, our nation s first president stated health was, “amongst (if not the most) precious gift of Heaven,” continuing “we are but little capable of business, or enjoyment without good health.” In 1912, Republican President Teddy Roosevelt, and Democrats Franklin Roosevelt, in 1935, and Lyndon Johnson in 1965, each proposed a type of national health care plan.

Today, there is proposed legislation written by Pramila Jayapal (D-WA) titled House Bill 1384 that would expand Medicare to everyone phased in over a two-year period. If passed into law, HB1384 would cover ALL American s, including every elected officials and civil servants basic and catastrophic health care needs, while cutting all copays, deductibles, and proposes to include dental, vision, mental health, podiatry, and comprehensive prescription coverage. As written, this law would NOT end private, for-profit insurance, but instead would limit what private insurance covers, which would be anything considered supplemental and non-health related health care.

Currently, it is illegal for the Medicare Administration to negotiate for lower drug prices under Medicare Part D. So, whether Medicare buys a single aspirin or a billion in a single purchase, the price is whatever the drug company decides to charge. HR1384 repeals Medicare Part D and makes it possible to slash pharmaceutical costs.

Under this plan, we would pay for Medicare for All the same way we currently pay for Medicare — through our weekly paychecks. The overall cost of coverage for nearly 95 percent of all Americans would be thousands of dollars less per year than most of us pay now. Yes, your public taxes will go up to about 6 percent of your annual salary, but you would no longer be paying those exorbitant private taxes known as premiums, deductibles, and copays to your for-profit insurance company. Both you and your employer would save thousands of dollars annually.

This law would end the plague of medical bankruptcies, allow you more freedom to go from job to job, more easily start your own business, and have peace of mind that if you get injured or sick that you won t leave the hospital with the number one reason for bankruptcies in America; medical bills.

Congressional appropriations for Medicare for All would be approximately $600 billion per year according to a Political Economy Research Institute, repeated annually as said during US House committee hearings in the summer of 2019.

Many unions have begun to realize the massive savings businesses would reap because of Medicare covering their members. Typically, contract negotiations focus on health care benefits, but under Medicare for all, the focus would instead be on pay raises, vacation time, worker safety, and other potential benefits typically lost in contract negotiations because the high cost of insurance premiums always dominating every negotiation.

Nearly $15 billion in Illinois budget funds would be available for other social needs like public education, rebuilding our crumbling roads, transportation, and other infrastructure. Even the potential for substantive tax cuts at the state and local levels for those of us with modest incomes would exist. This would apply to all local municipalities as well. That means more local tax dollars to pay for road upkeep, parks, the arts, and education. There would also be fewer taxpayer dollars going toward funding retired public employee health care.

Small business owners with employees would see automatic savings of their current tax-equivalent overhead costs of 22 38 percent be replaced with a 9 percent payroll tax, a net savings of between 13 29 percent for every single business. A business owner would not have to waste days, if not weeks, shopping around for insurance coverage for their employees year in and year out.

The individual open enrollment period becomes outdated as both employers and their employees do not have to shop around for what coverage they can afford for the coming year. Employees would not lose their favorite doctor because that doctor was not on the new insurance plan s network. Add to this the very real and measurable rise in employee satisfaction and increased productivity because of diminished stress about the cost of treatment for health problems, medical bills, and being able to keep one s favorite doctor.

Do not be fooled by fixes offered by career politicians who care more about doing the bidding of industry lobbyists than for the people. Fixes such as selling insurance across state lines are not a way to reduce the costs of health insurance. Congressional leaders continue to offer the removal of the imaginary lines among the states to increase competition among for-profit insurance companies. Bear in mind this concept would penalize states with higher and/or healthier populations than their neighbors. For-profit insurers would raise prices to manage the risk of the less populated or less healthy populations across states. Remember insurance companies are driven by profit, not outcomes, and health care needs of patients, thus denials for services and multi-tiered prescription prices are commonplace. This proposal is a race to the bottom, favoring the state with the weakest regulations to placate these companies. The tangible evidence of this outcome is seen with credit card companies that can cross state lines with their service agreements. The truth is anyone who has ever advocated for state s rights should be outraged over this proposal ever being mentioned at all.

Tort reform has also been proposed to cap the amount of damages awarded when a corporation, business, or individual has been found guilty of inflicting harm. The reality is these reforms only work to hurt hardworking Americans who seek redress after being injured through no fault of their own, while the guilty party gets off unscathed. Often the injured parties usually face exorbitant medical bills, only to have tort reform limit their claim to a maximum of $250,000. The injured person is left to either create a GoFundMe account for the rest or go bankrupt. Wherever tort reform has been passed, it has accounted for less than a one percent decrease in the overall costs of health care while doing nothing to improve health care outcomes or access thereof. Tort reform simply allows wealthy and powerful entities to wash their hands of its personal responsibility.

Health savings accounts have also been touted as a viable alternative for insurance reform. The drawbacks to these accounts outweigh most benefits and only work if, and only if you stay healthy for a long enough period to build up adequate equity in your account to be worthwhile and you have the extra money to set aside every month. Keep in mind that any funds you place into your account not actually used for health care may be subject to taxation. Also, health savings accounts are prohibited for those already on Medicare or Medicaid. Most Americans are not doing well enough financially to put aside enough to cover high insurance deductibles today as the cost for other necessities continue to rise while wages stagnate, and income inequality gets worse.

Even the ACA with a potential public option is not worth the political capital. Yes, the ACA did end the disgusting practice of preexisting conditions, allowed dependents to remain on their parents insurance until age 26, and did improve the lives of a few million Americans who had poor insurance coverages prior to its passing. But the ACA did not go far enough for everybody, as more than 32 million Americans still are without adequate health care insurance under this law, with up to 7 million Americans losing their insurance because of a Trump executive order that dismantled a key part of the ACA. And no, COBRA is useless as that only offers you the opportunity to pay the full cost of premiums to keep your insurance. Good luck with that.

It is safe to say the time for Medicare for All, as it was intended, has finally come. Most recent polling shows most Americans want Medicare for All to happen. If you believe healthcare is a human right, one protected by our Constitution, as I do, then we must work together to support a single-payer, M4A system.