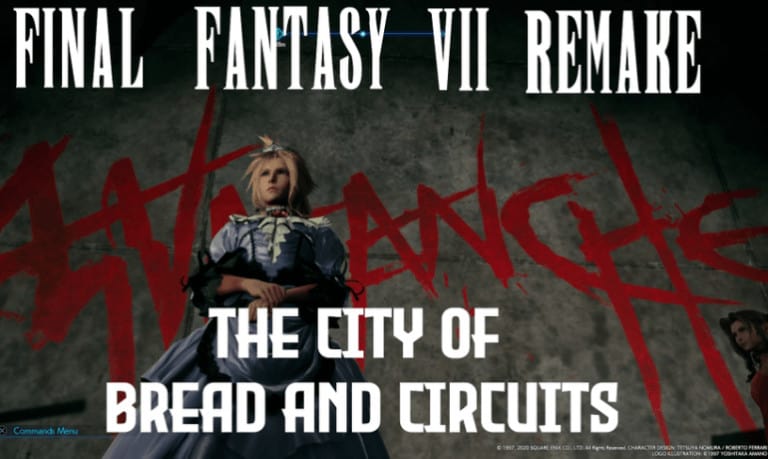 The City of Bread and Circuits

That was also the year the revolutionary Final Fantasy VII was released. It was at least 2000 when I first played it, so I just thought it was cool and edgy as a lot of the deeper themes went straight over my head. 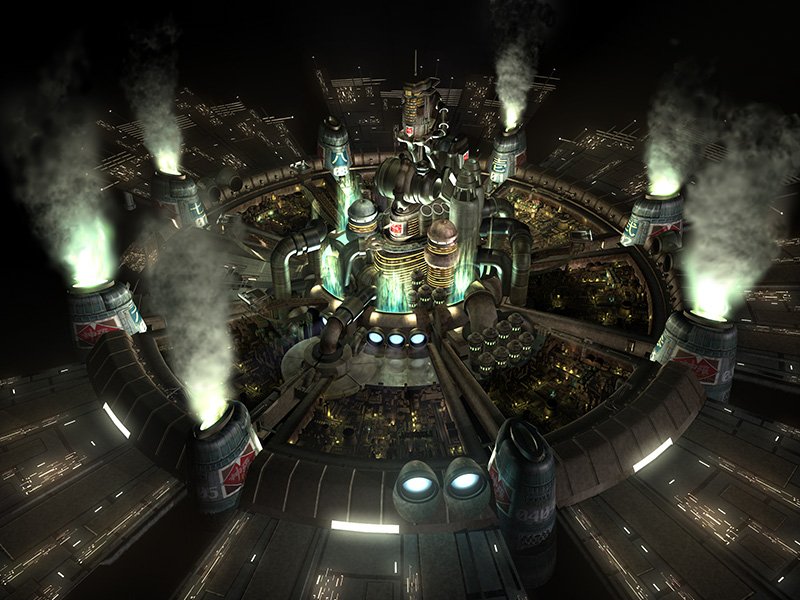 Back then, the original was a breakthrough hit, becoming the first Japanese role-playing game on a home console to break into millions of copies sold in Europe and America, and It was revolutionary, not just in its use of painstakingly rendered 2-D backgrounds but also itsit’s blocky 3-D characters. 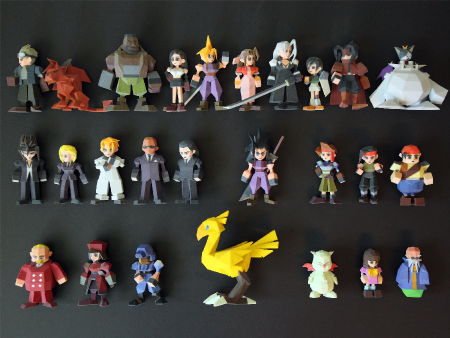 The blockiness of the characters in the original Final Fantasy VII may be a meme now, but Squaresoft (now, Square Enix) was breaking new ground in RPG character design.

In what may be the best days of my quarantine, I played through the remake and consumed a lot of media about this new game and the themes I now recognize as working-class and revolutionary. Because of this, I’m shocked, but not entirely surprised, no one has talked about the politics and philosophy of Midgar.

Final Fantasy VII Remake brings into even sharper focus the political undertones and characterization of the city of Midgar than its predecessor. This is in part because this game is only the very beginning of the original Final Fantasy VII which took its story outside of the bounds of Midgar rather quickly. In this new take, we get to see the city characterized much more fully and the politics surrounding it much more fleshed out. 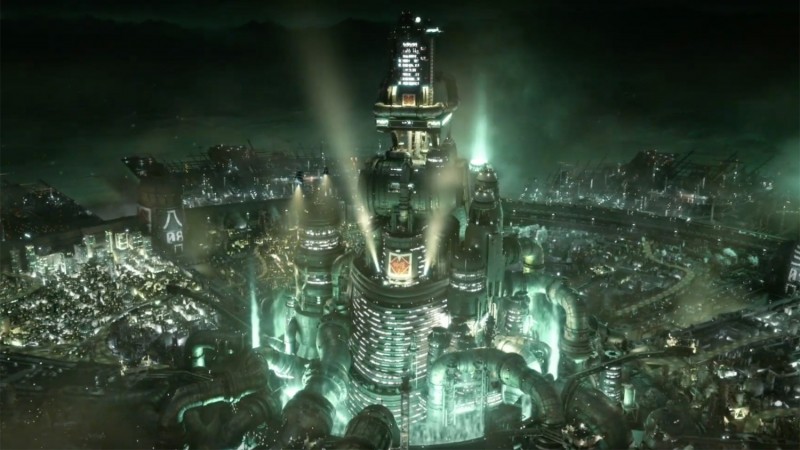 You experience the world through the perspective of Cloud, a pro-capitalist mercenary formerly employed by Shinra, who has just been hired by an anti-capitalist freedom fighter group fighting to save the planet from the Shinra Power Company.

“When we were kids… everybody wanted to be a SOLDIER, right? …Thing is, by the time I finally made it in, they didn’t need heroes any more. It was nothing like we dreamt of. It was just… working for Shinra.”

On the side of Shinra, is Cloud’s former employer, the “chief warmonger” himself, one of Shinra’s executives General Heidegger, named after the German Philosopher, and more importantly, a real-life Nazi. Towards the middle of the game, he says something that I found particularly interesting and illuminating. He boldly states that it is his intention to give the people what they want: 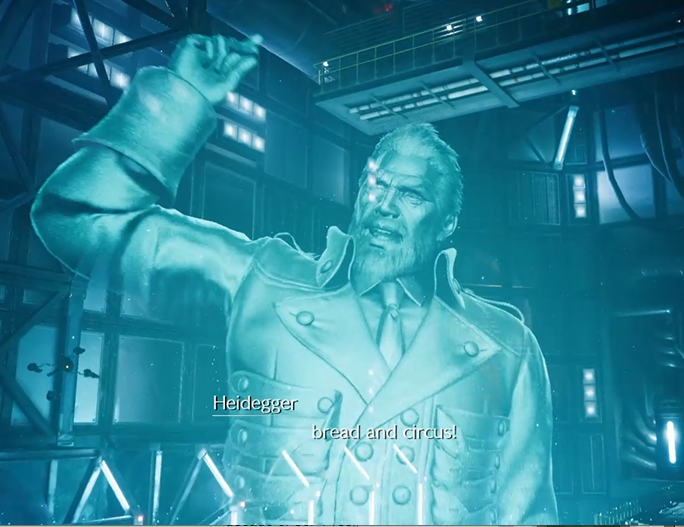 As it turns out, it’s actually a Roman phrase where circuses were only a superficial appeasement of the masses to keep them docile. This mind-numbing entertainment also seems particularly fitting here. It’s a lot of the political theater we’ve seen over the last decade or so. Presidential and Congressional politics are like a nightly wrestling match. They keep most of us fed, and everything else is the performative circus of playing opposition while pretty uniformly just doing whatever the lobbyists ask them to do. We get a new face, like Cuomo, or maybe a new heel, like Matt Gaetz, seemingly every week now.

Kid on Soapbox: “Bet you didn’t know that the smell of flowers helps nourish your heart.”

Hungry Kid: “I need nourishment for my heart and my body.”

Scornful Kid: “Stop thinking of food so much!”

– Orphan Kids at The Leaf House

The game kept me thinking about “bread and roses,” a phrase which goes all the way back to an ancient Chinese proverb: if you only have two pennies left, you should use one to buy bread and the other to buy flowers. This concept has been echoed not only in the Bible but by poets throughout time.

This idea of bread and roses took new life within the women’s suffrage movement, with roses replacing the mind-numbing idea of circus entertainment with cultivated beauty. This also may have a lot to do with the representation of flowers in this game coming in the unique decision to make a flower girl one of the primary protagonists of the story in a way I haven’t seen any other story do.

This idea was celebrated in James Oppenheim’s poem Bread and Roses which celebrated the women’s suffrage movement.

“Hearts starve as well as bodies; give us bread, but give us roses.

Go crying through our singing their ancient call for bread.”

But Midgar is something different that goes back to how I originally heard Heidegger’s words and how I misread the subtitles when I first played through the game. I could have sworn he said “bread and circuits” which really does speak to the underlying philosophy of this game in a juxtaposition that’s so powerful I actually regret the developers didn’t think of it.

You could say in Shinra’s view, the roses are unnecessary, as beauty is without any inherent purpose. It can easily be replaced by technology. This belief acts as a metaphor for the philosophy of FF7, where technology is literally coming while sacrificing the natural world.

One of the questions this game asks is whether it is right to sacrifice the natural world for the sake of technological advancement? This is a question we wrestle with within our world as all of our technologies and the ways they are created often create effects that kill us on an existential level while destroying the natural world around us.

It’s worth pointing out that this game seems to have a very specific obsession with flowers.

Cloud to Aerith: “You’re talking to the…”

Aerith to flowers: “So yeah… it was that kinda day.”

It should have been obvious to me, but I didn’t really get it until a certain scene inspired me to think about the juxtaposition of circuits and flowers in Final Fantasy VII Remake.

In the opening scene of the game, we are meant to be amazed by the technological sprawl of the city of Midgar. It is truly a fantastic and, to me, nostalgic sight to behold, which is why I failed to notice how bleak and desolate it was until the camera zoomed in on a single dying flower on a choked piece of earth surrounded by pavement, concrete, and metal jutting out of Gaia like a knife sticking out of a wound. 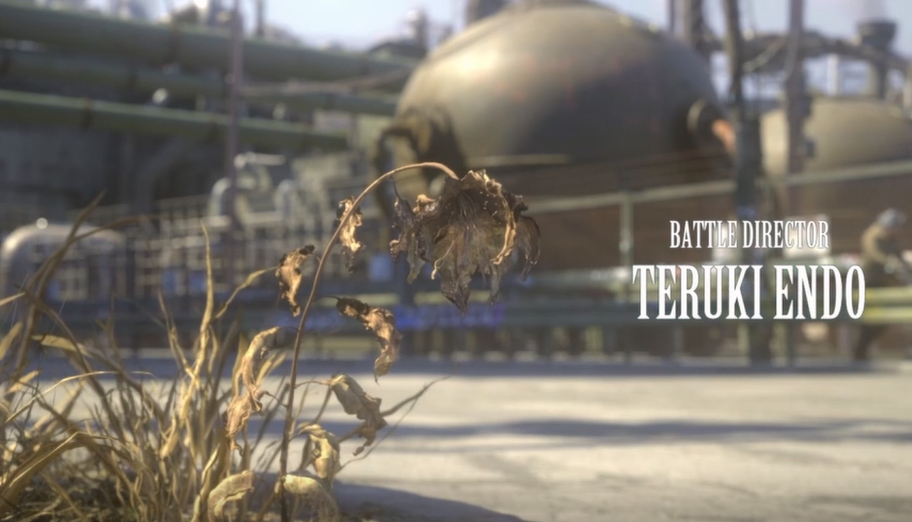 In doing so, the game immediately begins by explaining to you while Midgar may be a certain futuristic metropolis, it comes at the cost of the natural world on which it’s built.

We also see later in the game that the area around Midgar is a desolate wasteland appearing to have once been a green land of plenty. I believe this suggests the practice of extracting the magical lifeblood of the planet to power Midgar is making the world around Midgar so incredibly desolate.

But this isn’t the only way the game uses flowers and the natural world to make a point. The first act of selfless kindness demonstrated within the game is when a local flower girl hands you a beautiful yellow flower.

Aerith “Here, this is for you.”

Cloud is a mercenary indoctrinated into the views of the capitalist system he once served, so he expects to have to pay for it, but she gives it to him freely and at no cost.

Aerith “That’s right, it’s a gift… think of it as a memento.” 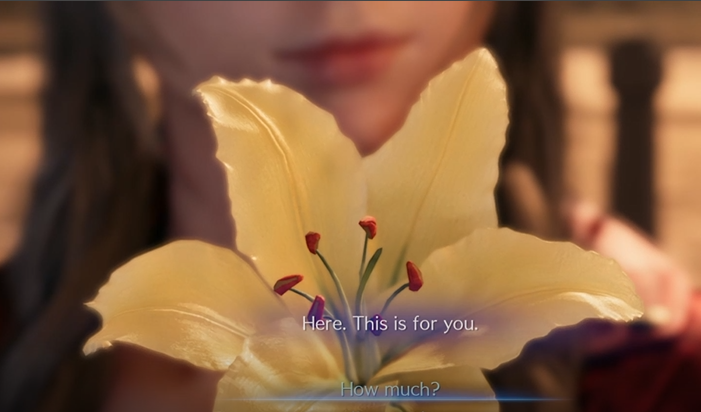 Aerith “That depends on the customer. In your case… it’s on the house.”

This seems to shock him a bit as he sees nothing in the world comes for free or without cost. In this way, the introduction of the flower girl who will become a protagonist of the story and her act of freely giving someone a flower is the first injections of a real socialist mode of being even if it’s only on a symbolic level.

In the rest of this 5 part series:

I’ll be discussing Ecosocialism and how Aerith is on a journey of self-emancipation; I’ll give you some ideas of the political system governing Midgar to help you decide if Shinra is fascist or just a libertarian dystopia; I’ll show you the three-tiered class system, built right into the city by design and finally; I’ll discuss the invisible hands of fate and how they shape our world.

Tune in next time or check out more of my work at https://www.youtube.com/channel/UCDfnoYQUfECzpS5r_f7mFUA