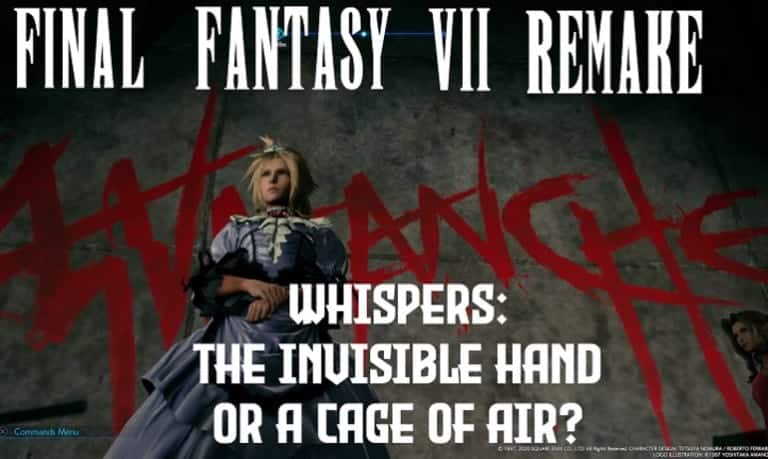 Whispers: The Invisible Hand or a Cage of Air?

Final Fantasy VII Remake is shown through the eyes of Cloud, a pro-capitalist mercenary formerly employed by Shinra, who has just been hired by an anti-capitalist freedom fighter group fighting to save the planet from the Shinra Power Company.

Cloud is stuck in a mode Mark Fisher calls capitalist realism. He is trapped in an invisible cage of air much like the one Aerith finds herself trapped in just after they meet. The air around him, this invisible force restricting him, develops because capitalism has become so ingrained in society. It becomes easier to imagine the end of the world then it is to imagine the end of capitalism. Capitalist realism confronts many people with the notion that this could be changed and we could become a socialist society, but we don’t because we are a capitalist society. 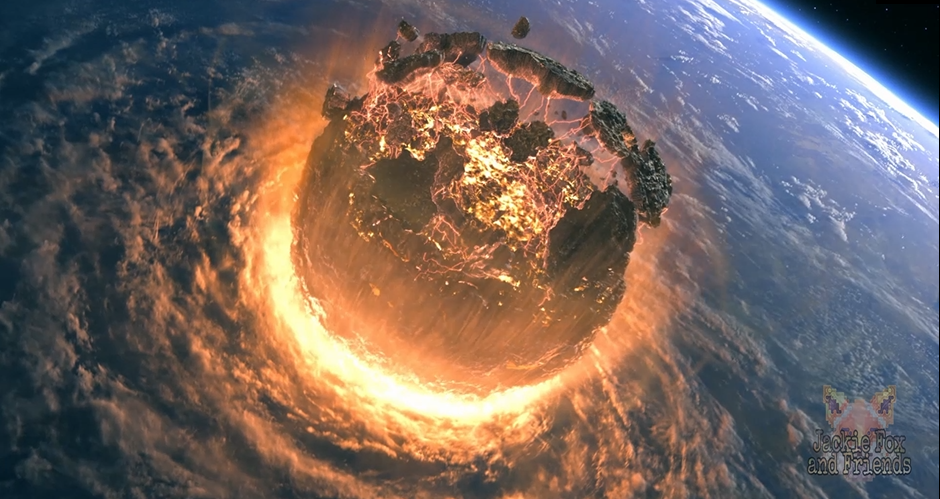 Or we can all just wait for someone to cast meteor on our planet and get it over with.

This idea is so deeply ingrained into their narrative of who they are and who they always will be that it controls the timeline past, present, and future. There can never be, to them, a socialist version of the world because for now and forever, capitalism is an immutable characteristic of themselves and their destiny.

One way of understanding capitalist realism within our world is to look at the issue of climate change. Imagine a world where we do everything now required to reach a point where climate change stops or even reverses.

That would be a world where you likely wouldn’t have an entire industry of aeroplanes or personal cars or cheeseburgers for every meal. It would be a world bursting with gardens not overtaken by factory farms or factories. Nearly every mass-produced good in your house might not exist in that world, but our problem is we can’t imagine a world not filled with factories producing fidget spinners and all of the random junk that’s sold to us on Facebook ads from Wish. Despite this being the only rational way forward for the survival of mankind, we find it easier to imagine the world overheating and turning into a red hot ball of magma where we all suffer and die than imagining an eco-socialist world where we don’t have the multitude of mass-produced goods capitalism and industrial culture has brought us.

When doing the side quests in this first part of the story, after being introduced to Aerith’s connection to her community, Cloud goes on a mission given to him by the kids of the community center they are working with. They have some pretty serious and dangerous work that they need a mercenary to help them with. At first, Cloud’s reflex is to say “you couldn’t afford to buy my help,” but when the children say “well in that case, we will have to fight this dangerous monster by ourselves,” he pushes down his capitalistic ideals and agrees to help them for a meager sum they can easily afford. 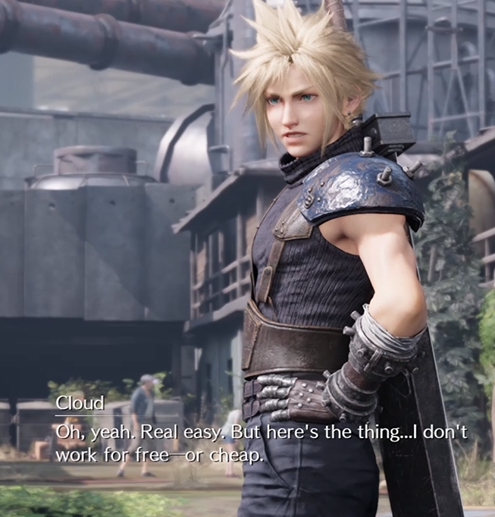 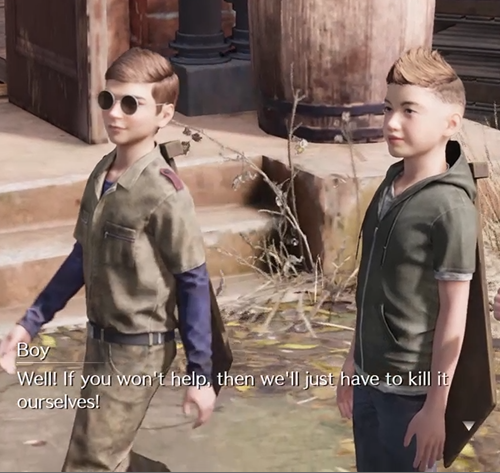 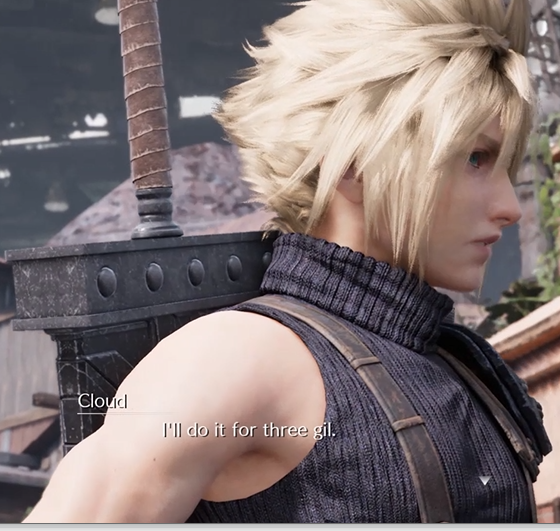 I believe he chooses to charge them a meager sum so as to try and balance his ideals as a capitalistic mercenary with his newfound appreciation for kindness and compassion, introduced into his thoughts by Aerith’s selfless and generous act at the beginning of the game.

It’s also around this point in the game that Cloud stops asking for the members of Avalanche to pay him for his help but instead begins to help them out of a genuine concern for the group, their cause, and the planet itself. This doesn’t stop him from doing odd jobs to raise money but he becomes less concerned with doing these odd jobs for money as he begins to emulate Aerith’s character and the way she compassionately acts for a community that needs help. In meeting her, she causes Cloud to begin questioning his capitalistic way and begin adopting a more altruistic way of helping people. This character development and professional growth all starts with a mission about picking flowers and the compassionate act of a person unconcerned with repayment. 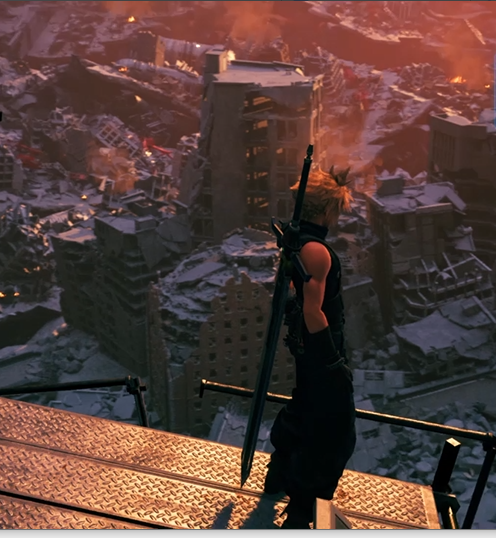 Cloud overlooking the ruins of Sector 7 after President Shinra dropped a plate on them.

In a plot development reminiscent of modern day CEOs and politicians, he successfully reassigns the blame for the mass murder as taking personal responsibility would call into question the righteous justification of his power. Instead he blames this supposed accident on the actions of Avalanche, with the mass murder being the unintended consequence of yet another attempt to destroy another reactor. The President is ready with a fabricated media lie to feed to the people in the slums who are most affected by this in order to turn them against what parts of Avalanche managed to survive. 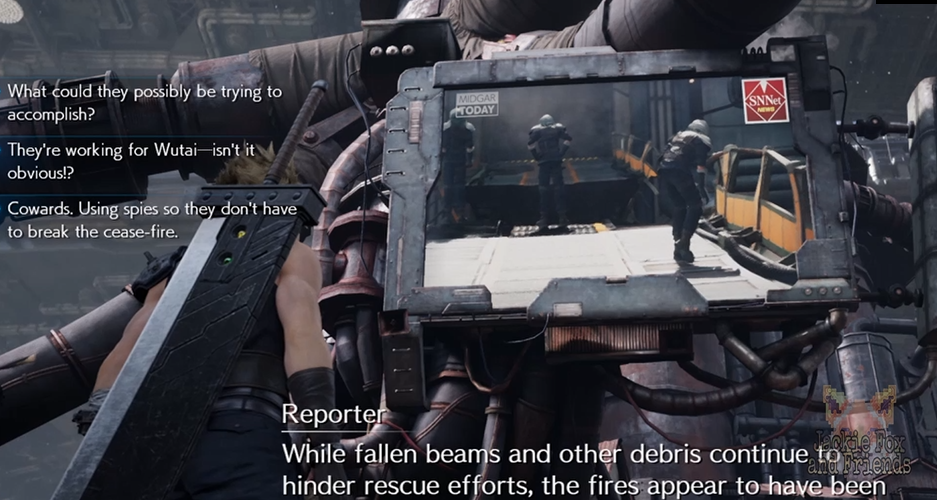 This can be seen in the capitalistic take-over of American Healthcare. It may not be as flashy as an explosion, but the for-profit health care system in America kills an estimated tens of thousands of people a year because they can’t afford to go to the doctor when they get sick. The industry itself is so bloated and cares so little about the people that hundreds of thousands go bankrupt each year because of the enormous size of their medical bills for life-saving procedures. It also leads to homelessness; a study of homeless populations in South Florida discovered not only is medical debt the number one cause of homelessness, health-related issues make up the top three!

This can also be seen in modern day oil companies that fight long and hard for their right to destroy the planet even though it becomes more apparent by the day, this is exactly what they’re doing. Their own studies confirmed the threat of climate change, and they adjusted their business practices, like raising their rigs in anticipation of the rising sea level.

They’ve even gone so far as to infiltrate and recuperate environmentalist movements and organizations opposing them in order to retain their dominance on the energy market at any cost, even if that cost happens to be human lives. In a world where profit and progress are gods, human sacrifice becomes more and more acceptable.

There’s another aspect of FF7 I found fascinating which is only available in the 2020 remake: the inclusion of ghostly specters invisible to those called whispers. 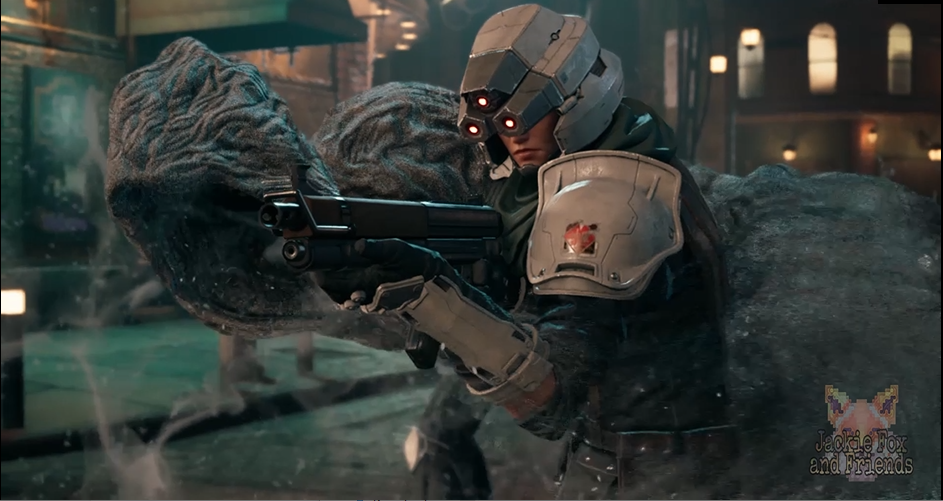 According to the game’s story, the only way you can perceive whispers is if you have been touched by them, and a more literal interpretation of the game sees the whispers as breaking the fourth wall and being a representation of the Final Fantasy community’s pressure for the game developer to stick very closely to the original storyline instead of making a new experience for gamers.

However, I also think the game developers are trying to tell us we could interpret these manifestations of fate as the invisible hand of capitalism guiding us, or perhaps they more closely align with Fisher’s invisible cage of air, a hallmark of Capitalist Realism. The Whispers actively resist our desire to change fate and try to dictate how we as individuals move forward in the world. Even though it is well established within the game story that these creatures are leading us to an apocalyptic level of destruction via the summoning of a meteor to destroy the planet, the whispers continue forcing our heroes down that self-destructive path and constantly blocking any attempts to change fate.

The fact that the Whispers exist to shape fate and are invisible to most reflects the overall structure of capitalism and how it shapes our lives. We have been born into this system and our understanding of the world often comes directly from its manifestation and institutions. It is like the air we breathe, completely invisible to us, yet affecting everyone’s life simultaneously anytime we attempt to control our own fate. It is the invisible hand of capitalism metaphorically holding us back in every way.

So, will we be able to defeat the invisible hands of fate as the protagonists do in a surprise twist ending that has the gaming community… let’s just say “divided”.

As a better ideal for a community, I have to say I love the level of mutual aid and support given in leftist communities towards a common goal, even if we all don’t have money to chip in to the cause. The revolution will be run by volunteer staff giving their all for a cause they believe in. I think this community is ultimately the greatest strength of leftist culture, and it’s something I would like to see spread throughout the world. Now, more than ever, we need to come together as a people to support each other as we begin to realize the capitalist system and its subjugated government isn’t going to do much to help us.

Otherwise we’re only likely to slip into a dystopian nightmare like Midgar.

This is the Final installment of my 5-Part Series on the fictional City of Midgar; The City of Bread and Circuits; The Myth of the Promised Land; Is Shinra Fascist or Just Libertarian?; and Midgar’s Tiered Class Structure. If you liked this, come check out more of my work at https://www.youtube.com/channel/UCDfnoYQUfECzpS5r_f7mFUA