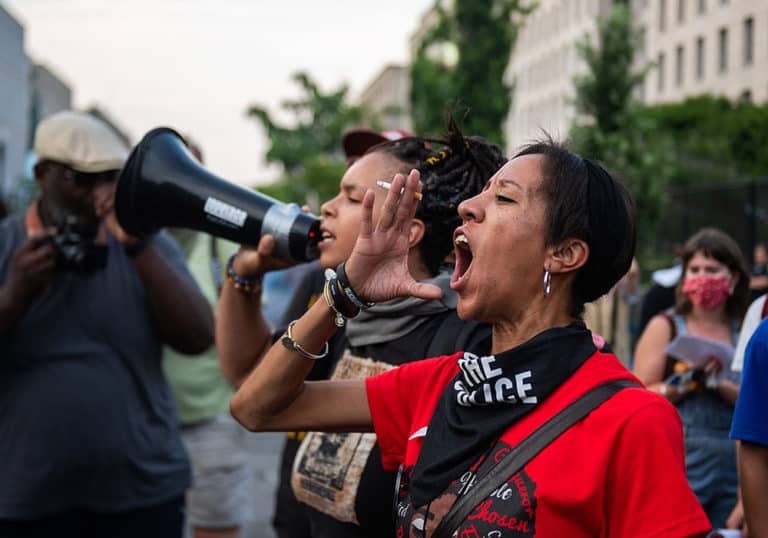 Battling Racism Beyond the Election

If Biden wins, he’ll be an improvement over Trump. But a seriously limited one. Although this limitedness can be shown regarding a number of areas, I’ll stick, for this paper’s purposes, to systemic racism.

First, though, this issue must be framed within a more general one—What happens when Biden takes office and subsequently the DP’s interests shift away from critiquing an incumbent Republican president to protecting an incumbent Democratic one?

Beginning in 2003, many DP leaders and party highrollers participated in the antiwar effort. Their goal: to undercut Bush’s presidency. However, the party’s strong showing in the 2006 midterms inspired some DP leaders and donors to curtail their antiwar activities in order to focus on the 2008 presidential election. This exodus grew steadily larger over the next two years. Still, the DP remained sufficiently involved in the movement to use it as a fertile ground for persuading antiwar activists that the coalition’s aims were synonymous with the DP’s and therefore the group ambitions could be satisfied by electing a Democratic president in 2008.

From 2003-2007 the antiwar movement mobilized millions of people against the invasion of Iraq. During this period, the movement averaged nine major antiwar demonstrations yearly. However, beginning with Obama’s 2008 presidential victory, “the scale of the movement shifted from large to small crowds.” (Heaney 2015, 68) Complementing this, national antiwar protests dropped to about one per year for the next four years. As analysts pointed out, DP operatives had fed off the movement, then left it behind when its usefulness was over. (Ibid,114)

This is what happens when the DP shifts from protesting a Republican president to protecting a Democratic one: suddenly, all people’s movements are expected by DP leaders to stop their own work and circle their wagons around the White House.

What happened back then can’t be allowed to happen to BLM now.

Instead, we must use every guerrilla-like, streetsmart, improvised trick in the book to scrape together funds, build up stamina, and use our digitalized contact lists to maximum effect by growing the number of protests, coast to coast.

This is necessary because no matter who wins on Nov. 3, the fight to rid the country of systemic racism and anti-black policing won’t succeed if the movement fades. The reality is this—every small change and promise of change that has been made in these areas so far was propelled into existence by nation-wide street actions, not by politicians, except for the handful with us from the beginning. But the vast majority of those who eventually took up the cause did so not on their own initiative, but only because the movement’s strength, diversity and relentlessness drove them to it.

This fact, that protests, not elected officials, are what fuel the movement against systemic racism, won’t change post-election.

Consequently, immediately after the election and in the months following the inauguration, we must pour into the streets in strong and unignorable numbers. If not, this moment of so-called “great racial reckoning” could end as merely one more progressive self-delusion in our white supremacist society.

Racism isn’t like a diseased gallbladder or appendix that can be surgically removed from the nation’s body. This is because racism is the body, has metastasized everywhere within it. Therefore, to get rid of racism we must get rid of the country itself, in its current form. This means we must reconfigure how we view the country’s history so we can turn that history into the preface for a new, revised and superior history—an epic about an actual democracy born, in significant part, of a successful battle to eliminate once and for all systemic racism and the horrors it perpetuates.

Without a vigorous Black Lives Matter movement demanding revolutionary system-wide transformation this cannot happen. This is why we must keep it alive at all costs following the election.

As we do so, we should heed Martin Luther King’s warning toward the end of his life about the need to remain astute when building alliances. Build them, he proposed, but never become dependent “on the good will and understanding of those who profit by exploiting us. (King 1961)

‌‌Heaney, Michael T.‌ and Fabio Rojas. 2015. Party in the Street : The Antiwar Movement and the Democratic Party after 9/11. New York: Cambridge Univ. Press.

Hosmer, James K. 1896. The Life of Thomas Hutchinson: Royal Governor of the Province of Massachusetts . Boston and New York: Houghton, Mifflin and Company.