Author:
Dan Kovalik
Date Published:
04/27/2021
Examining a phenomenon that is sweeping the country, Cancel This Book shines the spotlight on the suppression of open and candid debate. 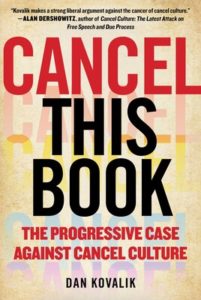 The public shaming of individuals for actual or perceived offenses, often against emerging notions of proper racial and gender norms and relations, has become commonplace. In a number of cases, the shaming is accompanied by calls for the offending individuals to lose their jobs, positions, or other status. Frequently, those targeted for “cancellation” simply do not know the latest, ever-changing norms (often related to language) that they are accused of transgressing–or they have honest questions about issues that have been deemed off-limits for debate and discussion.

Cancel This Book offers a unique perspective from Dan Kovalik, a progressive author who supports the ongoing movements for racial and gender equality and justice, but who is concerned about the prevalence of “cancelling” people, and especially of people who are well-intentioned and who are themselves allied with these movements.

While many progressives believe that “cancelling” others is a form of activism and holding others accountable, Cancel This Book argues that “cancellation” is oftentimes counter-productive and destructive of the very values which the “cancellers” claim to support. And indeed, we now see instances in the workplace where employers are using this spirt of “cancellation” to pit employees against each other, to exert more control over the workforce and to undermine worker and labor solidarity.

Kovalik observes that many progressives are quietly opposed to this “Cancel Culture” and to many instances of “cancellation” they witness, but they are afraid to air these concerns publicly lest they themselves be “cancelled.” The result is the suppression of open debate about important issues involving racial and gender issues, and even issues related to how to best confront the current COVID-19 pandemic. While people speak in whispers about their true feelings about such issues, critical debate and discussion is avoided, resentments build, and the movement for justice and equality is ultimately disserved.