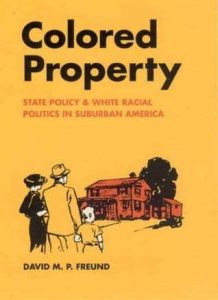 Northern whites in the post–World War II era began to support the principle of civil rights, so why did many of them continue to oppose racial integration in their communities? Challenging conventional wisdom about the growth, prosperity, and racial exclusivity of American suburbs, David M. P. Freund argues that previous attempts to answer this question have overlooked a change in the racial thinking of whites and the role of suburban politics in effecting this change. In Colored Property, he shows how federal intervention spurred a dramatic shift in the language and logic of residential exclusion—away from invocations of a mythical racial hierarchy and toward talk of markets, property, and citizenship.

Freund begins his exploration by tracing the emergence of a powerful public-private alliance that facilitated postwar suburban growth across the nation with federal programs that significantly favored whites. Then, showing how this national story played out in metropolitan Detroit, he visits zoning board and city council meetings, details the efforts of neighborhood “property improvement” associations, and reconstructs battles over race and housing to demonstrate how whites learned to view discrimination not as an act of racism but as a legitimate response to the needs of the market. Illuminating government’s powerful yet still-hidden role in the segregation of U.S. cities, Colored Property presents a dramatic new vision of metropolitan growth, segregation, and white identity in modern America.